Money under the mattress 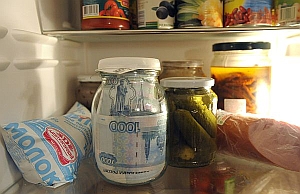 Many Russians still keep their savings in abanka, a jar

Russia is still vulnerable in its post-recession recovery. So it seems an odd time for the leading international banks to be beefing up their Russian operations, but a war for the contents of wallets has broken out in the country.

Surpisingly, one Russian stereotype still holds true: Most still keep their money somewhere in the house, according to surveys. That means an extremely unsaturated market when it comes to banking and great room for growth with a little confidence.

Russia is already the biggest consumer market in Europe. The combined assets of Russia’s top 200 banks were worth just more than one trillion dollars before the crisis, according to Business New Europe’s annual ranking, and while their assets have fallen ten-fold in the last year these banks are expected to regain most of the lost ground over the next two years.

At the same time bank-service penetration is extremely low; according to pre-crisis surveys, only one person in four has any kind of bank account — most prefer to keep their cash in what Russians call a banka, which is the word for a glass pickling jar. But banks have made massive inroads since the Kremlin launched a concerted reform effort in 2004.

Russia’s banking sector remains dominated by the state-owned retail giant Sberbank, which is three times the size of its next nearest rival, VTB Bank, another state-owned giant.

However, in recent years Sberbank’s near monopoly of retail banking has been whittled away by the rise of commercial banks, both foreign and local, that offer something Sberbank has always failed to provide — service.

The long lines and surly clerks that have been Sberbank’s hallmark can’t compete with the high tech offices of the leading commercial banks such as Alfa Bank, which have been aggressively chasing new customers.

Smaller Continental banks like Unicredit have been specializing in Eastern Europe since 1998. But other banks became seriously interested in 2007 when a wave of mergers and acquisitions swept the region.

Britain’s HSBC Bank, billing itself as the “world’s local bank,” was an early mover, launching retail banking in Russia in 2005 with its offering of private banking for the rich and the emerging upper middle class. Wealth is still highly concentrated in Russia and banks cater to the needs of the well-off. For example, leading Russian private retail bank Rosbank said that a third of all deposits belonged to only 1,000 customers, prior to the crisis.

Another British bank, Barclays, also entered the market in 2007, buying Expobank right at the top of the market. Based in Russia’s Far East, Expo was a small regional operation on the border with China, but Barclays used it as a platform to launch their operations countrywide and only two years on, its logo can be seen on ATMs across the country.

The crisis has damaged banks across Russia, but having watched the sector boom once in such a short time, these banks are committed to the long term. Even the Kremlin expects to return to 2008 levels of growth sometime in the next two years. That’s why HSBC decided to triple its capital in the midst of last year’s financial firestorm.

“If you want to know how committed HSBC is to Russia look at the fact that we upped the bank’s capital by $200 million in the midst of the crisis in September 2008,” said Moscow veteran and HSBC’s CEO Stuart Lawson, who also founded Citibank’s Russian operation in 1995.

The Russian banking sector remains wide open and, in fact, the average Russian is a much better credit risk than the average European. Because everyone was simply given their apartment following the collapse of the Soviet Union in 1991, Russians have almost no debt.

“It is hard to gauge the value of the residential real estate transferred to the population as until recently there has been no secondary market to price it,” said Roland Nash, head of research at Renaissance Capital. “But it should be worth hundreds of billions of dollars. As almost all of Russian income is disposable, they have the same spending power as the average Swede.”

The two British banks will also feel the heat from leading French bank Société Générale, which has increased operations in the last month.

SocGen has been in Russia since the 1990s, but built up its business slowly. After setting up an office in the 1990s, it launched a retail bank called Banque Société Générale Vostok and then bought Russian niche players like the leading consumer loans operations RusFinance and DeltaCredit.

The rise of the big international banks will turn up the heat on the locals.

“Russia’s smaller banks are already under pressure. The crisis has been a strain, but now the cost of capital is going up — they are not going to be able to invest into the systems that will make them competitive,” said Lawson.