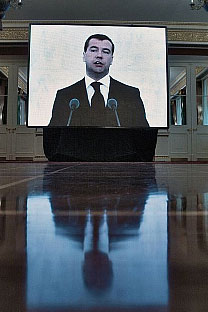 Are Medvedev’s actions starting to match upwith his words?

Graham Stack chronicles the slow but steady assertion of President Dmitry Medvedev. As Prime Minister Putin gains in popularity and puts out the domestic fires, Medvedev’s relatively free hand in foreign policy, and maturation in the role, is bringing about slow-burning change.

Russian transitions of power from president to president are gradual affairs, but they do happen. It was only after two years in office that former Russian President Vladimir Putin appointed his own defense minister and foreign minister, and only after four years, at the end of his first term, that Putin appointed his own prime minister and chief of staff.

The transition from Vladimir Putin’s to Dmitry Medvedev’s presidency has followed this pattern. The financial crisis inevitably thrust Vladimir Putin, Russia’s Prime Minister formally in charge of the economy, back into the limelight. And with the media baying for a sign of a destabilizing rift between president and prime minister, Medvedev has avoided high-profile domestic policy initiatives.

Likewise, with Putin’s hands full at home, Medvedev has had a free hand to shape Russia’s foreign policy, and to take up President Barack Obama’s offer of a reset in Russian-U.S. relations.

According to Medvedev, the plan will “finally get rid of the legacy of the Cold War.” Its key tenet is the “principle of non-divisibility of security”: Medvedev argues that security is a collective good that can be diminished by individual countries seeking to maximize their security. The treaty broadly prohibits signatories from taking any unilateral measures to increase their security, submitting them instead to regulation by international conferences, with majority decisions legally binding.

Moscow Carnegie Center’s Dmitry Trenin said the initiative is a response to “the two salient security issues in the Euro-Atlantic area: Moscow’s suspicions of U.S. intentions and motives vis-a-vis Russia...and Russia’s neighbors’ equally dark suspicions regarding Russia. Both sets of suspicions are real, if largely baseless, but each deserves hard thinking and a realistic strategy before they can be put to rest.”

Medvedev considers Obama, with his liberal instincts and background in legal scholarship, his ally.Thus Medvedev’s publishing of the security treaty draft coincided neatly with Obama’s decision to commit an additional 30,000 U.S. troops to Afghanistan. Medvedev’s response was positive: “We are obliged to help in Afghanistan. What the armies of the United States and Europe are doing [in Afghanistan] is peacekeeping.” Medvedev said, speaking in Rome. “We are ready to support the efforts of our partners, even with the possibility of transit that Russia permits,” Medvedev promised.

The coming surge in Afghanistan will make logistics even more critical. With supply routes through Pakistan imperiled by Taliban activity, Medvedev’s offer to transit U.S. weaponry gains in significance.

Medvedev’s readiness to provide logistical support for the Afghanistan surge goes against powerful voices in Russia’s security establishment, such as that of Viktor Ivanov, the head of the anti-narcotics authority and a close confidante to Vladimir Putin. Ivanov has called for Russian transit to be conditional on U.S. forces eradicating Afghanistan’s massive opium crop. Russia is reeling from the disastrous public health impact of Afghanistan’s soaring heroin exports, and Ivanov points to the success of U.S. aerial crop eradication in Colombia. Despite these voices, however, Medvedev’s offer remains unconditional.

Medvedev has generally adapted long-standing Russian positions to move closer to the United States. Regarding Iran’s nuclear power ambitions, Medvedev has acknowledged the possibility of sanctions, and has used completion of the Bushehr nuclear plant as a bargaining chip. Medvedev even signed up to Obama’s long-term initiative to eliminate nuclear weapons despite the vast discrepancy in U.S. and Russian conventional arms capacities and resistance from Russia’s top brass.

Put in His Place

When Putin announced that Russia could forsake its protracted bid to join the World Trade Organization (WTO), instead first forming a customs union with Belarus and Kazakhstan, Medvedev was quick to overrule him. According to Medvedev, Russia will retain the goal of joining the WTO at the earliest possible date, either alone or in the customs union.

And in November, Medvedev ordered a halt to the creation of state corporations with low accountability and wide powers. Critics saw this Putin-era trend as a new opportunity for corruption and contradicting civil law.

Will Putin protest against Medvedev’s new assertiveness? Sociologist and human rights activist Aleksandr Sungurov, who worked with Putin in St. Petersburg in the early 1990s, said loyalty is a key psychological trait for Putin. “Putin is loyal to whatever team he is a member of. He was loyal to the KGB when a member; he was loyal to Sobchak when a member of Sobchak’s team,” Sungurov said.

That means that Putin is notoriously tough on disloyalty. Instead of feeling bound by loyalty to Medvedev, Putin may see a more assertive Medvedev as disloyal to him.