Do Russian bears chase their vodka with caviar at 50 below? 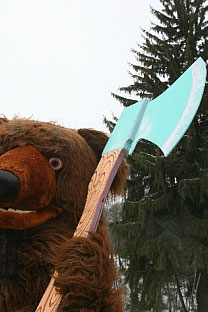 Ask the average European or American what sorts of associations the word “Russia” calls up, and 9 out of 10 will say roughly this: vodka, caviar, and snow

In recent Russian history there was a brief period when this series of associations was completely revised and foreigners were surprised to find that they had learned three not so simple Russian words: Gorbachev, glasnost, and perestroika. But very soon it was back to the old caviar-and-vodka routine — with a few gangsters, oligarchs and KGB men thrown in for good measure.

Today, of course, educated Europeans do not claim, as their fellow countrymen did 100 years or so ago, that bears shamble down the streets in Moscow and Russians begin drinking vodka with their mother’s milk. Even so, Russia has engendered more myths than any other country in the world. This is not a journalist’s generalization, but the scientific opinion of Moscow University’s Svetlana Ter-Minasova. Professor Ter-Minasova has studied this problem for many years and written several books on the subject. This year’s “non/fiction” book fair (dedicated to intellectual literature of all kinds) featured a round table discussion on “Myths about Russia”. The subject turned out to be so provocative that instead of the allotted 40 minutes, the discussion went on for two and a half hours with speakers practically grabbing the microphone out of each other’s hands.

It’s easy to understand why. Most Russians who have traveled abroad have run up against this traditional set of negative stereotypes about their country. And they all react in the same way: they feel offended and at the same time determined to prove that “Russians aren’t like that”. But how? On the one hand, there’s a bit of truth in what people say: we do drink vodka, and we do have gangsters and oligarchs. On the other hand, far from all Russians drink vodka and the ones throwing money around at luxury resorts are a tiny percentage of the population. But they, of course, are more noticeable.

Let’s take, for example, one of the most popular myths about Russia as a country that drinks. As a character in one popular Russian film said: “Who doesn’t drink? Name him.” Indeed, problems with alcohol are well known to many countries. Residents of St. Petersburg can tell stories about the brash Finnish guys who take the train down from Helsinki on their days off for the sole purpose of drinking (vodka is much cheaper in Russia than in Scandinavia). In English pubs on the weekends people do more than just relax from a hard week of work. The United States, too, has a serious problem with alcohol. But ask any resident of these countries who drinks more and they will say, without even thinking, “Russians”.

This may be because we promote this myth ourselves. In any case, this opinion was voiced at the book fair round table by a doctor of cultural studies, Vladimir Elistratov. It’s not that Russians supposedly drink more, but that they have more anguish about drinking and suffer more because of it. The Russian Orthodox Church began doing battle with drunkenness, which priests declared a terrible sin, as soon as Christianity was introduced. People did not stop drinking as a result (the righteous path is not for everyone), but they did develop an enduring feeling of guilt. We are more apt than other people to accuse ourselves of drunkenness — less because of the quantity drunk than because of the fact of consuming alcohol.

Incidentally, when these myths collide with real life amusing situations can ensue. Svetlana Ter-Minasova attended her first international congress on cultural communication between peoples in the mid-1990s in the United States. As she was about to give her paper, the host asked her in all seriousness if she wouldn’t prefer a glass of vodka to the traditional glass of water on the podium. Ter-Minasova was so nonplussed by this remark that she could only mumble something about not drinking in the morning. As a result, she wasn’t given even a glass of water.

Fighting myths is like fighting windmills — just as senseless. But as they say, if you can’t beat ‘em, join ‘em. Maybe we should start inventing myths — positive ones — about ourselves? Sometimes this happens all by itself. A friend of mine decided to become a sort of tour guide in the 1990s shepherding foreigners to Russia. Her first clients were a group of Spaniards. The first evening they were given a gala dinner in the Russian tradition of overflowing hospitality. Naturally, my friend ate and drank along with everyone. When they had all tumbled into the bus for the ride back to the hotel, my friend was in such a fine mood that she launched into a spirited rendition of an old Russian folk song. If they were surprised, the Spaniards didn’t show it. The next morning she felt a little awkward, here she barely know these people and already she was singing songs to them on the bus. Then she thought of a brilliant solution to this ticklish problem. She told her tourists that singing after dinner was an ancient Russian tradition. (There is some basis for this: Russians do love to sing folk songs. Not every night after dinner, it’s true, but on certain occasions, like New Year’s Eve.) But so as to keep up the reputation, my friend was forced to sing to the Spaniards every night. They liked it so much that by the end of their trip some of them had learned the words and were singing along. For all I know, they’re still singing those Russian songs on their plains in Spain.