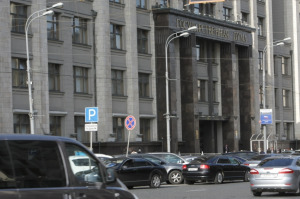 During his Nov. 12 Address to the Federal Assembly, President Dmitry Medvedev devoted an entire section to the window-dressing of Russia’s managed democracy.

True, the section came way down in the speech, far below bits on “innovation” and “modernization.” In fact, talk about the country’s fake political system ranked above only other such embarrassing topics as reforming the police and military and instability in the North Caucasus (about the latter, Medvedev said he considers it “our most serious domestic political problem,” making it hard to understand why he took nearly 10,000 words to get around to it).

As if he were inventing the wheel, Medvedev boldly called for new laws restricting the abuse of absentee ballots and ensuring equal access to the media for all parties (he didn’t mention that when opposition parties complained about massively biased media coverage of his own 2008 election, the courts ruled that coverage had been “equal” because all candidates had been mentioned).

In short, Medvedev offered what can only be called tweaks to a political system he sees as functioning properly. Following the regional elections in October that were grossly falsified by the ruling United Russia party, Medvedev said the trumped-up results had given the party “the moral authority to govern.” (Again, to bring up the inconvenient issue of his own fraudulent election, the authors of the recent and highly recommended “The Forensics Of Election Fraud” write that they did not include an analysis of the 2008 election “for the simple reason that calling it an election denigrates the meaning of the word…. We are not required to participate in the Kremlin’s farce by analyzing data from its 2008 presidential vote as if it were a true election.”)

In his Federal Assembly address, Medvedev praised the Putin-era political system, saying: “Today we can say that the multiparty system has evolved throughout the Russian Federation. It has become a stable, functioning, national political institution, the most important tool for ensuring the fundamental rights and freedoms of our people, including their exclusive right to power.”

“The political parties currently operating in our country have passed the test of time. As they fought for votes and voters' trust they have become stronger, and become truly popular,” Medvedev concluded.

The fictions about Russia’s “functioning” multiparty system were effectively exposed in a nice commentary this week on gazeta.ru by political scientists Arkady Lyubarev and Alexander Kynev. The authors don’t need to go into the details of the manipulation of elections over the Putin era in order to show exactly how this system is “functioning.” (The reader comments to this article are also well worth taking a look at.)

When the Putin-Medvedev reform of the political system began, there were 46 parties in Russia. The argument was that the large number of small (often ego-driven) parties was weakening the political system. The people, so the claim went, would be better represented by a few large parties. So, many policies were instituted to force political consolidation.

(Interestingly, one of the main mechanisms by which parties naturally combine – the formation of electoral blocs and the creation of joint election lists – was expressly banned under the so-called consolidation reforms, since the Kremlin was more interested in having parties it could control than in having a genuine multiparty system.)

Among them was the artificial creation of the A Just Russia party out of several smaller, but genuinely independent parties with their own constituencies. As Lyubarev and Kynev point out, A Just Russia has consistently polled less support in national and local elections than the main party that it subsumed, Rodina (Motherland). In the 2007 Duma elections, A Just Russia was given 7.7 percent, while Rodina polled 9 percent in 2003.

No wonder the Communist Party has found laughable repeated suggestions by A Just Russia leader Sergei Mironov that they join his feckless party.

The authors note that in many regional elections before Medvedev’s multiparty system started “functioning,” five or even six parties managed to get more than 7 percent of the vote (although back then, parties only needed 5 percent to get seats). In the elections in October, in two of the three federation subjects holding regional elections, only three parties reached 7 percent and in one of them, only two managed it.

“To sum up,” the authors write, “today we have seven parties, but the chances for three of them to gain seats in legislative bodies is extremely small – much smaller than it was before. Those three parties are balancing on the brink of disappearing.”

The authors speculate that the bandages Medvedev proposed to tweak this “functioning” system are intended to prevent more parties from becoming extinct in order to maintain the façade of multiparty democracy. “Apparently a further reduction in the number of parties is not part of the Kremlin’s plan,” they write. However, they express skepticism that Medvedev’s proposed measures will be sufficient to staunch the bleeding.

I’ll end with a quotation from the aforementioned “The Forensics Of Election Fraud”: “If with earlier [before Putin] elections, we suspected fraud in much the same way as a police officer might suspect drunk driving when he sees a car weaving and swerving inexplicably down the highway, in Russia’s most recent elections it is as if the driver is now tossing his empty beer cans out the window. The Kremlin may choose to argue that voting in Russia constitutes a free, fair, and democratic process, and they are free to do so. But we are not required to accept their assertions.”