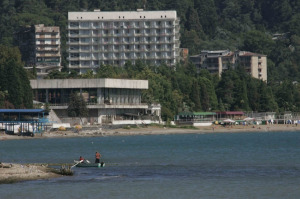 On Dec. 12, Abkhazia held a presidential election. The Central Election Commission recognized the election as valid and named incumbent Sergei Bagapsh the winner. He was ahead of his four rivals in the very first round, winning about 60 percent of the vote. The president's inauguration for his new term is scheduled for Feb. 12, 2010.

There was much more to the Dec. 12 election than just the counting of votes cast. The December election was the fourth one held in Abkhazia’s post-Soviet history. In 1994, the president was elected not by popular vote, but by the deputies of the Abkhaz parliament. In 1999, the first-ever general election was held, but there was only one candidate – the charismatic leader of Abkhazia and its first president, Vladislav Ardzinba. The 2004 election was a complicated and contested political process. This history of elections in Abkhazia shows how the republic has matured since the end of the war with Georgia. Five years ago, many in Abkhazia felt that the very existence of political rivalry was weakening the republic in the face of the “Georgian threat.” Today many politicians, including Sergei Bagapsh, are aware of the pragmatic significance of having a democratic procedure. Without this, international recognition of the republic is impossible.

Proof of Abkhazia’s commitment to improving its democratic process was the parliamentary election of 2007. During that campaign, there were no outright winners in 17 of the 35 constituencies. In the 2007 elections, seven opposition members won parliamentary seats – in 2002, not a single opposition member made it to parliament. In terms of democratic development, Abkhazia has won the competition with Georgia. Unlike Georgia, Abkhazia chose to hold parliamentary and presidential elections separately. And, most importantly, the transition of power from one president to the next did not involve revolutions or coups. There were no Shevardnadzes and Gamsakhurdias. Nor did Abkhazia witness the internal civil wars and strife that rocked Georgia in the early 1990s.

This December, Abkhazia held the first elections since other nations began recognizing the republic’s independence. For the first time, Abkhazia held presidential elections under no immediate threat from Georgia. There is no more military threat in the upper part of the Kodori Gorge that looms over Sukhumi, and in the Gali District there are no guerrillas controlled from Tbilisi by the Georgian Interior Ministry. Whatever political fate is in store for Bagapsh, Abkhazia will attribute this outcome to him.

It is hard to say at present how far the process of international recognition of Abkhazia will go. So far, the list of countries ready to recognize the new realities in the region post 2008’s “five-day war” is short. However, everything is relative. For example, in more than 30 years, only one country – Turkey – has recognized the Turkish Republic of Northern Cyprus. And yet nobody can seriously claim that this part of the divided island is part of the single Republic of Cyprus.

But while the December election was a successful test of the partially recognized state, the internal political processes in Abkhazia are hardly idyllic. Sergei Bagapsh will face many new problems and quite a few old problems are likely to resurface as well. At the top of the list is the solution to the problem of Abkhaz citizenship. On Dec. 12, only those with Abkhaz passports were allowed to vote. In this case, an Abkhaz passport was not solely an instrument of procedure and a guarantee against falsification, but rather an identification factor. Abkhaz citizenship represented the foundation for the building of a new state. In the period between January 2006 and October 2009, Abkhazia issued 141,245 national passports, including some 3,500 passports in the mainly Georgian Gali District. Issuing passports to the Gali Georgians is one of the key internal political issues in Abkhazia today. The passports go to the heart of the political identity of a new Abkhazia and the question of how well prepared the elite in Abkhazia is to avoid repeating the mistakes of the Georgian nationalists in the early 1990s who campaigned under the slogan “Georgia for the Georgians.”

The second issue that the presidential administration will need to confront is interaction with the opposition. Sergei Bagapsh won about 60 percent of the vote in the partially recognized republic. That suggests the need to work actively with the remaining 40 percent. In general, the key issue of Bagapsh’s second presidential term will be trial by the temptations of glory and power. In five years’ time he will hand over the helm of the Abkhaz ship of state to another captain. This puts the issue of the continuity of government on the list of priorities in the next five years.

The “Russia factor” will also be very important. The Dec. 12 election marked a milestone of sorts for Moscow, too. Russia’s popularity in Abkhazia cannot long be sustained by memories of 2008. Moscow should be aware of the simple truth: the further Abkhazia drifts away from Tbilisi, the more questions and criticisms will be directed to Russia, the guarantor of Abkhaz self-determination. Is Moscow prepared to regard Abkhazia as its own country and not simply the 84th Russian region? In August, Russian Prime Minister Vladimir Putin broke the unspoken tradition that had reigned in the post-Soviet space by meeting with the Abkhaz opposition. Perhaps it is a sign of new trends in Russian policy toward the “near abroad.” Time will tell to what extent Moscow is ready to respect the sovereignty of Abkhazia and its rights as an ally. Moscow should keep in mind that 2008 and the recognition of Abkhazia did not solve all the problems with that Republic in one fell swoop. The problems facing Moscow now are different, but no less complicated.

Sergei Markedonov is a political scientist and an independent expert on the Caucasus.