A Year of Increased Graft and Deadly Disasters 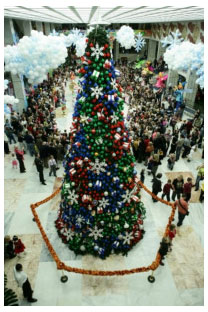 Russia will finish out 2009 sadder and a slightly more sober than usual but hardly any wiser. Russia’s economy fared worse than all other Group of 20 countries during the crisis, and the excessive number of catastrophes it suffered underscored how woefully ineffective, incompetent and corrupt the government is. Nonetheless, the government hasn’t budged one centimeter from the status quo course that has driven the country into a political and economic dead end.

The State Duma’s reaction to Yegor Gaidar’s death is highly symbolic and is a fitting way for President Dmitry Medvedev and Prime Minister Vladimir Putin to conclude their disastrous year as leaders of the nation. Led by Oleg Morozov, first deputy speaker of the Duma and a United Russia member, the lower house of parliament refused the motion to observe a moment of silence for Gaidar, a Duma deputy of six years, an acting prime minister and one of the most influential economists and reformers in Russian history. Not a single high-ranking member of United Russia or the presidential administration came to pay their last respects at Gaidar’s funeral.

For the past eight years, Gaidar warned the country’s top politicians and economists in the Kremlin and White House about the danger of building an authoritarian police state, of increasing the government’s role in the economy, of closing markets to foreign competition and of increasing protectionist barriers. His final book, “Power and Property,” released this year, serves as Gaidar’s political will and testament. In the book, Gaidar warns that giving the government so much control in the economy will mean that Russia will never be able to catch up with the developed world. Furthermore, Gaidar wrote, Putin’s state-capitalism model will lead to the demise of the state itself. Gaidar never tired of telling Putin supporters that Russia’s so-called “special path” would take the country to only one destination the Third World.

liberal-democratic views ranges from 15 percent to 20 percent of the adult population, or from 21 million to 28 million people. These supporters of liberal reform have not been represented in the Duma since 2003, when the Union of Right Forces and Yabloko, according to official election results, received just under the minimum threshold of 5 percent of the vote. In addition, other liberal parties such as my Republican Party of Russia were not even allowed to compete in the 2007 Duma elections after being disqualified on trumped-up “technical violations.” The liberal political and economic programs of these parties have been systemically defamed by the Kremlin in state-controlled national media outlets. With reformers absent from the ranks of the political and economic elite, there is no chance that Medvedev’s modernization program can succeed.

2009 highlighted several stylistic differences between Medvedev and Putin. Medvedev likes to make harsh criticisms of Russia’s state of affairs while calling for rapid modernization and softening Moscow’s foreign policy course. Putin, however, insists that the existing political and economic models work well. He remains in favor of heavy state control of much of the economy and an aggressive foreign policy.

Medvedev has not backed up his idealistic rhetoric regarding the need for liberal reforms and modernization with any concrete actions. Moreover, nothing in 2009 indicated that Medvedev has finally become an independent political figure. The government and presidential administration remain completely loyal to Putin. Moreover, United Russia has strengthened its position as the country’s single political force. The nationwide elections in October set a new record for their level of falsification. At the same time, United Russia is trying to extend the vertical power structure even further by pushing to end the direct elections of mayors.

Throughout 2009, Putin undermined most of Medvedev’s positions, which were already weak to begin with. During Putin’s December call-in program, in answer to a question of whether he would consider retiring, Putin snapped, “Don’t hold your breath!” This doesn’t leave much room for Medvedev, who for his part said he doesn’t want to “lock elbows” with Putin in running for president in 2012. In regard to Medvedev’s criticism of state corporations, Putin replied that they are “necessary.”

Throughout the year, Medvedev was incapable of managing the country’s numerous political and economic crises. In March, Moscow’s Khamovichesky District Court started a new criminal case against former Yukos CEO Mikhail Khodorkovsky and his former business partner Platon Lebedev that is even more absurd than the first conviction. There was a trial against several minor accomplices in the killing of journalist Anna Politkovskaya, but the mastermind has yet to be charged.

In April, drunken Moscow police Major Denis Yevsyukov went on a shooting spree in a supermarket, using a gun that had been sought in connection with a previous crime. Not long ago, police Major Alexei Dymovsky made a YouTube appeal to Putin complaining of abuses in the police force. Amazingly, Interior Minister Rashid Nurgaliyev, a close associate of Putin, has managed to hold onto his job. Nor have there been any shakeups in the secret services, despite a repeat bombing of the Nevsky Express train and a wave of terrorist acts in the North Caucasus.

The level of corruption became markedly worse in 2009. What’s more, this year showed that corruption kills, as illustrated by the Perm fire that killed 150 people and the Sayano-Shushensky disaster, in which 75 people died. Medvedev continues to battle corruption with empty words.

As we approach the end of the year, there is not much to celebrate on the political and economic fronts. In Russia, 2009 will be remembered for its increase in corruption and bloody catastrophes and for the country’s overall deterioration. Happy New Year, Russia!