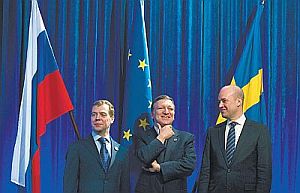 In June 2008, president Dmitry Medvedev first floated the idea for a new, broader structure for European-Atlantic security. The Kremlin made it a concrete proposal in November, posting the article “The European Security Treaty” on its website.

Under the heading “From Vancouver to Vladivostok”, Mr Medvedev’s treaty attempts to encompass, among others, Nato, the Organisation for Security and Cooperation in Europe and the Collective Security Treaty Organisation. The West has reacted sceptically at best. At worst, many in the West see the proposal as an attempt to restore Russia’s lost global influence, if not its empire.

Mr Medvedev’s initiative was the logical continuation of the foreign policy outlined by then-president Vladimir Putin at the 2007 Munich Conference on security. Mr Putin said: “Security for each is security for all,” and the model of a unipolar world in the 21st century is not only unacceptable but impossible. In Moscow’s opinion, unilateral action (in the former Yugoslavia or Iraq) only creates problems. Every country, especially a totalitarian one, defends its fundamental national security concern: self-preservation. For the past 60 years, nuclear arms have proved to be one of the most reliable guarantors of this for countries that are part of the official and unofficial nuclear club.

But as a rule, those countries have complex and difficult relations with neighbouring states and are burdened with historical, ideological, religious, territorial, ecological and other problems. The result is a nuclear domino effect. If, for example, Iran develops nuclear weapons, this will inevitably lead to the uncontrolled proliferation of nuclear arms throughout the Middle East and beyond.

Moscow is extremely concerned about attempts by the United States and some of its allies to reach decisions affecting regional as well as global security outside the framework of the United Nations. Nato, the European Union and the Group of Eight do not have the global mandate to make these decisions independently.

Thus, Medvedev is trying to build a much broader structure for global security. The basic idea is that “no single state and no single international organisation in the Euro-Atlantic region can strengthen its security at the expense of the security of other countries and organisations”. Medvedev’s draft treaty has already been sent to Nato, the EU, the Collective Security Treaty Organisation, the Commonwealth of Independent States and the Organisation for Security and Cooperation in Europe.

It was also presented and discussed at the latest Nato-Russia Council meeting, held in Brussels.

Of course there is a large discrepancy in terms of resources among the members of these organisations. For example, Nato’s military potential far exceeds that of the CSTO. In addition, Nato’s zone of operations has expanded so much that every former Soviet republic now participates in its Partnership for Peace programme. What’s more, Georgia, Azerbaijan, Armenia, Kazakhstan and Moldova are in the initial stages of joining the alliance.

But Nato’s future is uncertain, and this underscores the importance of finding options to provide European-Atlantic security. The more that Nato tries to expand, the more diluted, cumbersome and ineffective the organisation becomes. Moreover, Nato suffers from a lack of mission and common cause. The Russian menace is greatly exaggerated, and international terrorism is too diffuse a threat to unite alliance members. What’s more, with Washington’s security guarantees becoming more unreliable, European states have been forced to consider creating their own security structures. Remember that the EU proposed forming its own security structure – a “Nato without the United States” of sorts. Further, apart from the largely decorative Nato-Russia council, Nato has not included Russia and its closest allies in the European security structure. This not only weakens Nato, but gives it a certain anti-Russia character.

In addition to Nato’s inherent weaknesses, there are also serious problems with the OSCE. The OSCE member states have never resolved a major interstate conflict, such as Nagorno-Karabakh.

The OSCE, which lacks sufficient unity among its member states, has not worked effectively with the CIS to form a unified security structure

Therefore, there is an urgent need to redesign the old and ineffective European-Atlantic security structure to meet new threats and challenges. Medvedev’s European Security Treaty offers a new architecture for the post-Soviet era, and the West should treat it seriously.

It provides an excellent opportunity for Russia, the CIS, Europe and the United States to work together toward strengthening security from Vancouver to Vladivostok.