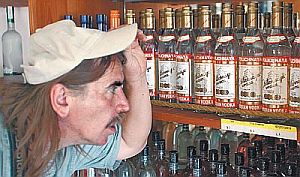 Alchoholism remains a major problem among all segments of Russia's population

Russia’s recently formed Federal Service for Regulating the Alcohol Market has drafted an order setting a minimum retail price for vodka. It is proposed that from January 1, 2010, the lower limit will be set at 89 roubles (£1.82) for half a litre.

From next year any vodka which costs less than this may be illegal. This applies to all vodka which is put on sale, regardless of whether it is produced in Russia or in another country. No minimum retail price for vodka is currently set in Russia.

Vadim Drobiz, director of the Centre for Federal and Regional Alcohol Markets Research, noted the need for a decision on the minimum retail price for vodka. By the end of 2007 the percentage relationship between legal and illegal vodka in Russia was 70:30. Then production of “grey market” vodka started to be on the upswing. Two years ago 1,300 million litres of vodka were produced legally, and 600 million litres illegally. Then the picture changed. A further 200 million litres of “grey” vodka began to be produced, while the quantity produced in licensed factories fell by 250 million litres. Currently, 265 factories have a licence to produce vodka, but some are not operating.

Illegal vodka now costs from 35 to 70 roubles per bottle, but surrogate vodka can be bought for just 25 roubles.A bottle straight off the licensed production line has a price of 63 to 65 roubles. Then the wholesale trade adds a mark-up of about 15pc, and the retail trade about 30pc. That’s how a bottle ends up with an average cost of about 110 roubles.

The amount of excise duty collected could also increase. Although the sums here are considerable, at 30bn roubles per year, they could be even more. Up to now not everyone has been honest in calculating duties from the sale of vodka. As for the price, the expert believes that the introduction of the new limit will not affect the price of legal vodka.