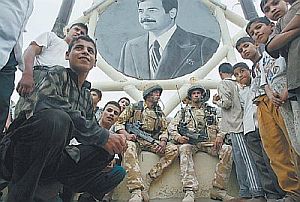 As the investigation into the circumstances of the US-British invasion of Iraq in 2003 continues, Russia unexpectedly popped up as one more brick in the defensive wall that former officials of Tony Blair’s government are building around their actions in 2001-2003.

Blair’s ex-foreign policy adviser Sir John Sawers said Russia blocked the “smart sanctions” against Iraq, which the US and British delegations lobbied for in the UN Security Council in 2001. In Sawers’ view, this stance of Russia made the war inevitable.

Andrew Gilligan, the former defence and diplomatic correspondent at BBC’s Radio 4, is rather sceptical of Sawers’ allegations. “I would say to John Sawers: ‘Nice try.’ But I don’t think there is any truth in what he said at all,” Gilligan said in an interview to Moscow-based Russia Today television channel. “An awful lot of countries have been breaking sanctions against Iraq… It was clear that the United States and Britain wanted a war.”

Mr Gilligan became famous thanks to his 2003 investigation into the events that led to the war in Iraq. Soon after the start of the war, Mr Gilligan left his job at the BBC as a result of a controversy that erupted around his efforts to prove that the British government and intelligence tried to “sex up” a dossier on Iraq’s weapons of mass destruction in the run up to the war.

A recent statement by Britain’s former prime minister, Tony Blair, that he would have gone to war even if he had known that Iraq had no weapons of mass destruction, makes Mr Sawers’ statement even more irrelevant. The UN sanctions were primarily aimed at stripping Saddam Hussein’s regime of weapons of mass destruction which it allegedly possessed. Meanwhile, judging by Mr Blair’s recent statements, the American and British governments were in no way discouraged by the lack of evidence of Saddam Hussein’s possession of such weapons. In his interview with BBC One’s Fern Britton, Mr Blair said: “I can’t really think we would be better with him [Saddam Hussein] and his two sons still in charge… In the end, I had to take the decision.” This statement seems to corroborate Mr Gilligan’s view that Mr Blair first decided to have a war and later searched for arguments to back up that decision. In this situation, Russia’s opposition or support for sanctions at the UN was a matter of secondary importance, dwarfed by Mr Blair’s desire to make the world a better place without Saddam Hussein.

In 2003, Russia was, indeed, against the war in Iraq, and made a special statement on the matter, reflecting the common position of Russia, France and Germany. Was this attitude dictated by “commercial interests” of Russia in Iraq, as Mr Sawers seems to suggest by his statement? Yes, Russia did not make a secret out of its desire to get back $9bn of Iraqi debt. Moscow wanted its money back and its business in, just like other creditors of Iraq, including some respected Nato allies. But the main argument of the opponents of war, including Russia, was that the invasion of Iraq was a war of folly – the term later used by Mr Obama’s supporters during his electoral campaign in 2008.

Hans Blix, the former chief UN weapons inspector, who headed the UN Monitoring, Verification and Inspection Commission in Iraq before the war, agreed with the Russian position before the invasion. Last year Blix wrote in the Guardian that this war was “a setback in the world’s efforts to develop legal restraints on the use of armed force between states”.

This is, in fact, a synopsis of Russian rhetoric before and after the invasion. So, what was so immoral about Russia’s desire to get back its money and prevent an “unnecessary war,” as President Obama recently referred to the operation in Iraq? This is a question Mr Sawers will have a hard time answering.


Primakov: ‘I had not expected such cynicism’

It is well known that for a number of years a UN Special Commission tried to establish what was the real state of affairs with regard to nuclear weapons in Iraq, but to no avail. Russia did everything it could to create the right conditions for this commission to work without interruption. The efforts made in this direction proved to be essential, since Saddam Hussein occasionally went to extremes in demanding that his presidential palaces be excluded from the locations to be inspected, or that Americans be removed from the commission. The situation was improved every time by Russia putting persistent pressure on Saddam Hussein to co-operate with the Special Commission. I know this because I was directly involved as minister of foreign affairs, and Russia’s role can be confirmed by my then colleagues, including US Secretary of State Madeleine Albright…

I also recall a conversation with Richard Butler, the chairman of the Special Commission, while he was in Moscow, and what a depressing impression it made on me. I asked him whether the Special Commission could close its file on nuclear weapons and missiles, since nothing had apparently been discovered, and Butler replied: get agreement with the USA and I’ll do it. Many people said that Butler had longstanding links with the CIA, but nevertheless I had not expected such cynicism from him. You see, it was not a question of the objective nature of the verification, so much as the USA’s agreement to predetermined results.

In any case, however, what prevailed was our conviction that we should give every assistance to the UN Special Commission in order to bring to light the real state of affairs regarding nuclear weapons in Iraq. Also we could not ignore the Special Commission’s achievements, such as deploying monitoring facilities capable of providing information from installations after they had been inspected. Saddam Hussein, incidentally, never once lifted a hand against these facilities.

The UN Special Commission’s investigations ended, as we know, without result.

An extract from Yevgeny Primakov’s book A World without Russia? A Product of Political Shortsightedness