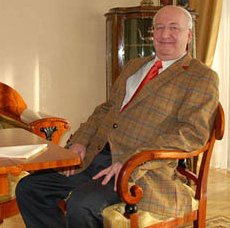 Read other articles by Alexander Kadakin:

My passage to many Indias: the coexistence of multiple realities

You have worked in India for many years, you have already been Russia’s Ambassador to this country, and then you headed the Russian diplomatic mission in Sweden. How do you feel being back to work in New Delhi?

The answer to this question implies at least two dimensions – emotional and professional ones. But for me both of them confine to the peculiar set of emotions one usually feels while coming back home.

There is no any figurative exaggeration in these words. It turned out in such a way that starting from being a student, and then during my professional career, I have been connected with India for a greater part of my conscious life. Perhaps, when I happened to come to this country 38 years ago as a probationer of the Soviet Embassy, I had only a general understanding what a deep and multifaceted phenomenon I would have to deal with. And, of course, only gradually a great, mysterious, ancient, dynamically developing and modern India revealed itself to me. It has been becoming closer, penetrating step by step my consciousness and in many ways defining my interests, views and even habits. As a result, now India for me is similar to the notion from the Indian philosophy – “Karma Bhumi”, which means “the Land of Destiny”.

So, to this very land I have come back. My return here is like coming home, which is very close and familiar, which has always been in my soul and in my heart, and which encompasses many of my plans and hopes. Of course, it is also a place where I have got many close and good friends and old acquaintances, people who have become almost relatives for me, with whom my friendship has been lasting since 1971, just imagine - for 38 years! Among them there are many, with whom I was actually never parted, exchanging letters and often speaking over the phone. I know that they were waiting for me with sincere warmth and cordiality.

This all together creates a thrilling feeling of coming home, inseparable from anticipation of exciting, intense and important work.

Could you evaluate the changes which have taken place in the political and economic landscape of India over the five years of your absence?

Russia is glad that India is developing at a rapid pace and is changing very fast, having joined the club of great powers whose active participation is an indispensable condition of tackling any global problem. It is crucially important that stability and order, being the major, I would say, the backbone feature of the Indian socio-political life, remain unchanged and inviolable. It enables to counteract effectively such serious challenges and threats as cross-border terrorism and subversive extremist activities within the country.

Russia takes great interest in the Indian experience of sustainable development, the GDP growth pace, which remains one of the highest in the world even in the conditions of global financial and economic crisis. In my opinion, it is a result of a well considered and measured economic and fiscal policy of the Indian government, aimed at further liberalization and increase of domestic demand.

We are inspired by the fact that the steady progress of the investment climate in India makes its economy attractive for the foreign capital inflow. There is no accidence that Russian companies begin to make an active use of investment opportunities offered in India, especially in such vital areas as infrastructure, power, telecommunications and the service sector. The unprecedented initiative of the Russian joint-stock financial corporation "Sistema" which is planning to invest over 5 billion dollars in the Indian telecommunication sector sets a very good trend in this respect. In our view, such break-through and large-scale projects should play the core role in the Russian-Indian relationship, enjoying the government support from the both sides.

Any discussion on the relations between Russia and India invariably touch upon of late the "irritating" subject of the aircraft carrier "Admiral Gorshkov". What are the prospects, in your opinion, for the early settling of this issue?

Frankly speaking, sometimes one gets an impression that today the issue of "Gorshkov" is blown up to the size equal to the huge dimensions of the heavy aircraft-carrying cruiser itself. But I do not think that it should be considered as an irritating factor in the bilateral relations. It is rather a complicated issue, burdened by mutual mistakes which, nevertheless, are in the process of settling. I hope that in the near future it would be finally dropped from the agenda.

I would only like to mention that even in the opinion of the Indian Navy the price for the aircraft carrier modernization, which is being negotiated during the last meetings, can not be considered as too high, since a ship of this particular class costs much more, and possibilities of it’s supply from other countries, let us say honestly, are quite limited. As far as the delivery deadline for "Admiral Gorshkov" to the Indian Navy is concerned, this issue, as it is known, has been taken under the control of the Russian President, which means that provided early settlement of financial terms, there shouldn't be any deviations from the agreed time schedule.

I would like to remind that in the course of cooperation between our two countries a number of questions and routine issues, demanding if not immediate then rather planned and efficient consideration and solution, would naturally appear. Take, for example, the still unresolved question of re-registration of the former Soviet Union’s property or the recent problem with business visas for specialists working on contracts in India. One can add to this the problem with illegal immigration from India and subsequent repatriation of Indian nationals illegally arriving in Russia with the view of finding passage into Europe, as well as the painful issue of the fate of the cultural heritage of the Roerich family estate, Tataguni, near Bangalore. There are other issues as well which require settlement and search for the mutually acceptable solutions. I would like to stress, however, that the time-tested positive practice of the Russian-Indian friendly relations demonstrates stable intention of the both sides to meet each other’s expectations and find compromises.

What areas will be given first priority relating to the expansion of ties between Russia and India during your new mission?

Trade and economic cooperation obviously plays the key role in the relations between our two countries. In our case, alas, it still lags far behind the level of our political interaction and in no way corresponds to the potential of both economies. There is, undeniably, a positive dynamics in the growth of trade turnover between our two countries, but even the target of $10 billion set for the year of 2010, as I feel personally, is inadequate. In my opinion, there are opportunities for reaching higher levels and we intend to actively use them. Among them I would mention utilization of the efficient mechanism to monitor terms and conditions of implementing the largest and strategically most important contracts.

The Russian side is resolutely determined for further expansion of military and technical cooperation with India, focusing on the most advanced projects, including a fifth-generation fighter and new modifications of BrahMos missiles. We hope to expand contacts considerably in the sphere of peaceful use of atomic energy and in space exploration based on the concrete existing agreements. It appears also to be highly relevant to intensify scientific ties and academic exchanges, to revive interest towards the Russian language and literature in India. Finally, experience of national Years of Russia and India has demonstrated the tremendous importance of deeper and stronger cultural cooperation as one of the forms of people’s diplomacy per se and means to consolidate friendship and strategic partnership between our countries.