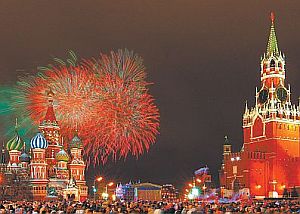 Go to Moscow in winter and ride through forests on a horse-drawn sleigh or sail down the Moskva River on an ice-breaking boat; check out new artists in a converted wine factory or 19th-century paintings in a fairy-tale studio.

The old Soviet exhibition grounds, to the north of the city centre, are an intriguing destination for visitors. Founded as an agricultural expo in the Thirties, the VVTs (All-Russian Exhibition Centre) celebrated its seventieth birthday this year. People often call it VDNKh (the Exhibition of Economic Achievements), which was its title in the Fifties – and is still the name of the nearest Metro.

The ornate pavilions and fountains represent a colourful variety of styles, from the graceful golden figures of the “Friendship of Nations” to the huge dome of the former Cosmos Pavilion. There is a new ice rink this winter, and plenty of weird and wonderful museums, shops and rides hidden in the huge two-kilometre complex: an Ice Age Museum in Pavilion 71, where you can have your photo taken with a woolly mammoth; an aquarium with sharks in Pavilion 11; and a Soviet-era IMAX in a round concrete building near the south exit.

Two major attractions in the area are back this year: the ultimate socialist realist sculpture, Vera Mukhina’s 1937 Worker and Farm Girl, which was unveiled again after lengthy renovation this month; and the Space Exploration Museum, underneath the soaring titanium Monument to the Conquerors of Space. The museum’s collections include the stuffed bodies of Belka and Strelka, the two dogs who survived their trip into space in August 1960. The space theme is enhanced by the “Avenue of Cosmonauts” leading up to the museum and the Moscow monorail, which stops near the main gate.

If all the fairground attractions, neon lights and piped Muzak get too much for you, you can always escape into the muffled acres of snow in the nearby Botanical Gardens. You don’t always realise it when you are in the centre of town, but Moscow actually has nearly 100 parks and gardens with three times as much green space per head as London.

“White space” might be a more accurate description at this time of year. You can snowball round Catherine the Great’s palaces at Tsarytsino, sledge through the ancient orchards at Kolomenskoe or take a troika (horse drawn sleigh) through the 18th-century landscaped park at Kuzminki. The park is also the official home of Ded Moroz (“Grandfather Frost”), the Russian Father Christmas. At one end of a chain of frozen ornamental lakes is a collection of wooden cottages and carved animals. These include dachas for Ded Moroz and his granddaughter, Snegurochka, the snow maiden, as well as a theatre, ice rink and post office.

Not far away is one of Moscow’s hidden gems: the sphinx-guarded, silk-wallpapered palace at Kuskovo. A beautiful collection of buildings stands beside a lake, where the aristocratic Sheremetev family used to stage mock sea battles. The orangeries house the State Museum of Ceramics, ranging from ancient Greek vases through Alexander I’s Egyptian dinner service to Soviet-era plates, complete with slogans.

For pure winter fun, you might want to head to the island of Serebryany Bor (“Silver Pine Forest”), in a bend of the Moskva River on the other side of the city. “Walruses” (people who like swimming in holes in the ice) plunge into the winter ponds, especially around the Orthodox feast of Epiphany on January 19. At the western end of the island, an outdoor waterside skating rink, ice slides and a fancy log cabin café face the clifftop village of Troitse-Lykovo, with its baroque church, across the river. The village was home to the reclusive writer Alexander Solzhenitsyn before his death in 2008.

When the temperatures are cold enough, you can walk across the frozen Moskva to explore the wooden cottages. The woods here are a paradise for cross-country skiers, and the lake at nearby Strogino is a favourite of snowkiters and ice fishermen. Closer to the centre, the ski lift at Sparrow Hills, with its famous view over the city, takes you to the top of a 90-metre slope, popular with snowboarders.

If all this sounds too chilly, there is always the indoor option. From the cosy bar of a boat, you can sail past Sparrow Hills, Gorky Park and many other famous Moscow landmarks. The Radisson Hotel’s new ice-breaking yachts will be cruising all the way to the beautiful Novospassky Monastery, with a meal included in the £20-30 ticket prices.

Much cheaper is a 50p DIY sightseeing tour on one of Moscow’s trams. Besides the famously ornate underground Metro system, the city has a large network of trams and trolleybuses. The number 39 runs right across town, with views along the river to the Kremlin, passing the ancient Danilov and Donskoy Monasteries.

Moscow is world famous for its cultural and artistic traditions. There are more than 150 museums, many of them commemorating famous writers and artists who have lived in the city. Pushkin, Tolstoy, Chekhov and Dostoevsky all have “house-museums” in Moscow.

The artist Viktor Vasnetsov, who designed the façade of the Tretyakov Gallery, also built himself a picturesque cottage in 1894 on what was then the outskirts of town. You can visit the house, not far from the old Moscow Circus on Tsvetnoi Boulevard, and see huge canvasses of monsters, warriors and princesses in the wooden attic-studio.

There’s plenty of modern art in Moscow, too. Factories, bus stations and warehouses have been converted into museums. Winzavod has 30 different shops and galleries in the red brick buildings of an old wine factory, and the café serves a great business lunch on weekdays for 220 roubles (£4.50).

Their current offerings include an exhibition by Japanese photographer Masao Yamamoto, which runs until the end of January, and they frequently host markets of funky designer crafts.