The trap snapped shut 30 years ago 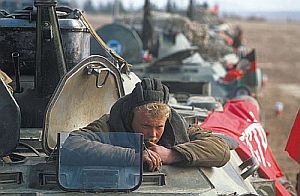 This year’s calendar contains two memorable dates for Russia’s Afghan veterans. February 15, 2009, was widely celebrated as the 20th anniversary of the day Soviet troops pulled out of Afghanistan. On December 27, veterans will mark the 30th anniversary of the Soviet invasion.
On that day in 1979, KGB and military intelligence spetsnaz (special forces) assaulted and secured all the key government buildings in Kabul, killed Hafizullah Amin, the second president of Afghanistan, and installed the KGB-approved Babrak Karmal in his place.

That day is often regarded as the fatal point, from which the countdown began for the fate of the Soviet Union. It is commonly believed that the armed invasion of Afghanistan, followed by a decade of fierce fighting between the “limited contingent” (as the Soviet forces were dubbed by the Communist press) and the Mujahideen, dealt a crushing blow both to the reputation and economy of the Soviet Union, driving the existing cracks deeper into the system, before the USSR collapsed together with the Communist regime.

An unbiased analysis, however, requires consideration of another view with which an increasing number of Russians tend to agree, particularly in the context of continued coalition efforts to curb the Taliban insurgents in Afghanistan. The Soviet military presence beyond the Pyanj and Amu Darya in the Eighties checked the spread of religious extremism and prevented this large region from slipping into unrestrained anarchy. The Taliban of today, in fact, has its roots in the radical Mujahideen movement, which fought the Red Army in the Eighties.

Whichever is closer to the truth, the obscure history of the Soviet-Afghan conflict still holds unresolved questions. One of the most intriguing mysteries concerns the motivation behind the Soviet government’s decision to launch the invasion. Historians still do not understand why the Kremlin bosses, who had unanimously objected to an open intervention against a neighbouring state in the summer of 1979, suddenly changed their minds several months later. After I had spent many years trying to find the answer by scrutinising hundreds of documents and interviewing people who were directly or indirectly involved in those events 30 years ago, I came to the conclusion that the fateful decision, which was documented in a secret hand-written resolution of the Politburo on December 12, 1979, was compelled by a combination of circumstances.

The ageing Soviet leader, Leonid Brezhnev, was deeply disturbed by the murder of the 66-year-old Nur Muhammad Taraki, president of Afghanistan, who was killed at the order of Hafizullah Amin. Given that the Afghan government was overthrown just months after Brezhnev welcomed the Afghan president in Moscow and promised his support and protection, the general secretary took the murder as a personal affront and an open challenge that begged for a response.

Marshal Dmitri Ustinov, the Soviet defence minister, was concerned by a US announcement that same autumn that the United States would station medium-range missiles in Europe that would be aimed at the East. Losing political influence in Afghanistan meant, from Ustinov’s perspective, that such missiles would inevitably appear close to the Soviet southern border, vastly shifting the existing balance of power.

Admittedly, the defence minister was also eager to combat-test the enormous Soviet arsenals built over the years of the arms race.

Yuriy Andropov, head of the KGB, was affected by the heavily biased intelligence coming from his agents in Kabul indicating that the Afghan armed forces were unable to cope with the threat of Islamist extremism. By that time, the Mujahideen had attacked government forces from multiple locations, and Amin as well as Taraki before him implored the Kremlin to provide full-scale military support, lest Kabul be taken over by bearded fanatics.

They argued that Islamic guerrillas would not stop, but would continue to expand their corrupting influence northwards to the Muslim republics of the Soviet Union.

Finally, the Soviet decision-makers associated with the Afghan invasion had a common phobia as the Cold War reached its peak and both blocs were consumed by mutual fears. Who would finally outplay the other? Whose nerves would prove to be stronger? Ultimately, Moscow faltered under the pressure and was lured into a trap with no exit.

Curiously, the Soviet leadership was fundamentally misled by their previous experience of suppressing Eastern Europe – Hungary in 1956 and Czechoslovakia in 1968 – where opposition was quickly and almost bloodlessly removed by several large tank units. But Afghanistan proved to be far beyond any comparisons with Europe.

All the main figures of that epic drama are long gone. And those who had to fight and sort out the mess for 10 years – soldiers, officers and generals – meet twice a year, on February 15 and December 27, to remember their fallen comrades in arms and past battles. They are not ashamed of taking part in the war, which is receding quickly from modern sight, and they come to these traditional gatherings wearing their decorations and awards, happy and excited.

They did their duty protecting the interests of their homeland. For some years, they have been inviting war veterans from the United States and other Western countries to join them. I think it is a good idea. Language barriers disappear as they communicate in the common language of the soldier and veteran.