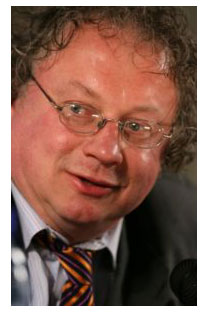 Dr. Nikolai Zlobin is director of the Russia and Eurasia Project at the World Security Institute. A former professor at Moscow State University, Zlobin joined the Institute in Washington, D.C., in 2001 as a senior fellow and director of Russian and Eurasian programs. He is a leading expert on international security; terrorism; relations between the United States and Russia, as well as the United States and the nations of the former Soviet Union; and the politics and history of Russia, Asia and Eurasia.

IP: You have said you support the independence of Abkhazia. Why?

Zlobin: I support it because it exists already. Lots of people are saying that the independence of Abkhazia began in August 2008 but that is very wrong. In fact, Abkhazia became independent 15 years earlier (when it successfully repelled an attack by Georgia.) When I support Abkhazian independence, I am on the side of justice for the Abkhazian people.

Abkhazia built a functioning state under tremendous pressure. It faced sanctions from everybody around, including the Commonwealth of Independent States. The government has managed to carry out its presidential elections which were relatively free and fair, has developed a civil society and a free media. Abkhazia is a much more democratic state than many other neighbors. The most important thing, it is not a state created by somebody else. It is a country which became independent after a war.


IP: The Republic of Abkhazia recently concluded its first presidential election since the country was officially recognized by Russia. What did you think about the outcome?

Zlobin: I think it was a truly democratic election and in that way it did express the will of the people who voted. There’s no question about that. What is amazing about this election, compared to other post‐Soviet states, is that there was some political struggle. There was a real opposition with access to the media and to the people of Abkhazia.

IP: President Bagapsh was re‐elected with a majority of the votes and 73 percent of the eligible voters participated in the recent election. What do you think the voters are expecting from his government?

Zlobin: Some people have written that the elections didn’t really matter because all the candidates supported closer relations with Russia. I think people are missing the point. That is an important issue, but it’s an issue that is more or less resolved. There are a lot of unresolved issues in Abkhazia; property rights, refugees, citizens’ rights, the economy and investment. All these things are going to be on the mind of the next president.

IP: Do you think there is any situation under which Abkhazia would be reunited with Georgia?

Zlobin: I think potentially there could be a situation in the region where Abkhazia will become part of something bigger, economically and politically, that will bring Abkhazia much closer to Georgia. But Georgia must change as well and become a positive contributor to the regional problem. Not a headache producer, but a solution producer. I hope the Caucasus will move more and more toward the European Union model where national borders play a less and less important role.

IP: What is the biggest misperception Americans have about Abkhazia?

Zlobin: I think the first is about democracy. The Bush Administration, in particular, tried to build democracies everywhere in the world and ignored Abkhazia, which was much more democratic in a way than Georgia. Abkhazia is a modern democratic model for the U.S. If America were to support the democratic regime in Abkhazia, then maybe the situation in the Caucasus would be much more peaceful.

The second misconception is that Abkhazians are Russian puppets. That is wrong. I know the history of relations between Abkhazia and Russia and it is not rosy. The Abkhazians are very independent and proud and Abkhazia is a country which will stand up for itself against Georgia or Russia or whomever.

The Abkhazians are doing what is good for Abkhazia. If it is good for Russia too, there is nothing wrong with that. Russia has helped Abkhazia, no question about that. But people forget that Abkhazia also helped Russia secure its position in the South Caucasus. If not for an independent Abkhazia, Georgia would be part of NATO and there would be American bases on the Black Sea. Russians don’t appreciate enough what Abkhazia did for Russia.

I think national interests are a professional way of formalizing your selfishness. If Abkhazia can do something, and if they can get other countries to help them, then that’s wise politics.

IP: Abkhazia has been isolated and controlled by others for decades, first under the Soviets and then under Georgia. What do you think are its prospects for economic independence?

Zlobin: For international investors, it is still unclear what the rule of law is going to be. There is also strong Russian influence. This is a difficult stage. But I think it is a question of time. Abkhazia has to work hard on the rule of law and fight corruption. There are a lot of ways Abkhazia can work on its economy without conflicting with Georgia.

I think it is important for the Abkhazian diaspora to help, in particular people who live in Turkey and Russia. Turkey’s diaspora is very interested in what is going on in Abkhazia. They see big prospects for Turkey’s relations with Abkhazia. Turkey has good relations with Russia and Washington and it is a member of NATO, which can bring more reputable investments from the west to Abkhazia.

Abkhazia is a beautiful piece of land, one of the best in the world, which can be very attractive not only for tourists but for agriculture and for things like the production of pure water.

What western governments don’t seem to get is that, if you don’t work with Abkhazia, you push Abkhazia back to Russia. That is stupid, because Abkhazia becomes more and more a Russian monopoly.

IP: Georgia, supported by its allies in the West, has waged a successful economic, diplomatic and military blockade of Abkhazia, including the seizure of Turkish ships delivering consumer products and fuel to Abkhazia. What do you think of this strategy?

Zlobin: I love Georgia, it’s a great country. I have been there many, many times and I would like to go again. But by stifling the development of Abkhazia, Georgia is making the same mistake it has made for the last 16 years. It has made Abkhazia believe Georgia is the enemy.

IP: Why do you think the West has refused to re‐consider its financial and military support for Georgia, even after a recent EU report confirmed that President Mikheil Saakashvili was responsible for launching the August 7th 2008 attack on South Ossetia?

Zlobin: First of all, I think this is not very high on the list of foreign policy priorities for Washington.

Second, I think this is part of a rethinking of the American position toward the post‐Soviet space that is not yet complete. I do see the American political establishment thinking about Georgia much more skeptically and Saakashvili is not getting as much political support and encouragement as several years ago. America is famous for recognizing the reality, even if it is not done formally . . . Northern Cyprus, for example, is a successful existing state. There are a lot of different flexible models without formal recognition. I think in America today, this issue is not so black and white anymore.

IP: Some people believe the only reason the U.S. supports Georgia is to ensure that it maintains control over valuable oil resources in the region. Do you agree?

Zlobin: No. If oil were the issue, then the U.S. would concentrate on the Caspian Sea. The Black Sea is much more a geopolitical issue. There are some spots on the global map where every global power wants to have influence. The Caucasus is a place, the Middle East is a place and the Balkans is a place. These are regions which are crucial for global stability.

Zlobin: Kosovo is a symbol of two things. First of all, the right to be independent, in my view, is more important than the rights of states to keep their territorial integrity. States should have less rights than their people. If people want it, then let them do it. Kosovo also was the best way to get rid of the Yalta system, which was signed in 1945, sixty‐some years ago, in a world which doesn’t exist anymore. I felt (Russian President) Medvedev did a historic thing when he recognized Abkhazia. I am very critical of Medvedev, but I support him on this. Medvedev basically killed the Yalta system and said, finally, now we live in a different world in which independence can be secured by the people.

Zlobin: I don’t think in the 21st century, formal recognition is important for a state to exist. It is not up to Russia or Georgia or other states to determine whether Abkhazia has a right to be a state. That right alone belongs to Abkhazia. The Abkhazians have proven they want a state. Now it is up to Americans to recognize this reality, not formally but from the point of view that it is the reality. It’s great to have Georgia, Abkhazia and Russia as countries which have good relations with the U.S. Don’t be part of the conflicts between them. America should be a solution tool, not a conflict tool in the Caucasus.

IP: What steps would you recommend the U.S. take to improve the prospects for peace in the Caucasus?

Zlobin: Start with visas. Start by letting in people who can deliver honest and direct information about Abkhazia to the American government. Don’t look at Abkhazia through the eyes of Georgians or Russians. Get first‐hand information. Then see how it fits with America’s national interests. Based on that, develop a policy towards the region. This should not be considered a move that is damaging Georgia or is against Georgia. This is part of something bigger, the American reset of Caucasus policy.

Of course, Georgia would be upset. But America will have to make a political decision about that. I would tell them that Abkhazia did not break up from Georgia, it was part of the breakup of the Soviet Union. Also, Abkhazia did not fight for separation. It did fight for independence. Don’t look on Abkhazians as terrorists or separatists who are trying to get out and build some criminal state. They want independence. This is part of America’s political culture. It is in our constitution, our bill of rights. Opposing Abkhazia’s desire for independence is hypocritical.