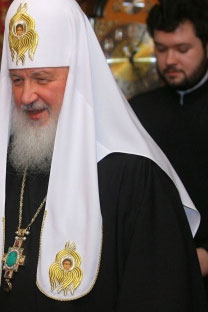 VIENNA — Patriarch Kirill has assumed tighter personal control over a much-expanded Missionary Department in the Patriarchate’s central office, a move that highlights his commitment to increasing missionary activity by the Russian Orthodox Church not only inside the Russian Federation but abroad.

And while the full ramifications of his moves in this regard — announced yesterday on the website of that department — remain uncertain, Kirill’s new approach poses challenges to non-Orthodox and especially non-“traditional” faiths in Russia and represents an effort to link up with conservative Catholics in Europe.

On December 31, that site said, Kirill confirmed proposals by department head Archbishop Ioann of Belgorod and Starooskolsk to reorganize and expand the Missionary Department, including in it sectors for various aspects of missionary activity and, what may be especially important, a collegium consisting of sector heads, theologians and missionaries.

In its new form, the Patriarchal Missionary Department will consist of a Missionary Foundation, a central administrative apparatus, a sector for “Work with Bishopric Missionaries and Missionary Bases,” a sector for “Anti-Sect Work and Spiritual Security,” a training sector, a publications sector, and an analysis sector.

Archbishop Ioann has now held the first session of the collegium of the expanded department, and that body has formed groups from priests and students of the Belgorod Missionary Seminary for conducting missionary activities in Siberia and the Far East this coming summer.

The Belgorod See and its institutions have long had the reputation as being among the most conservative of Russian Orthodox places and also one of the most hostile to Protestants, Catholics and others that the Orthodox refer to as “sects.” Consequently, Kirill’s decision to rely on people from that bishopric says a lot about the direction the new department will take.

In an initial comment on the new arrangements, Mikhail Zherebyatyev, an expert at the Moscow International Institute of Humanitarian and Political Research, pointed to the centralization of the Orthodox Church’s missionary effort implicit in the announcement.

The Missionary Department, as Kirill is organizing it, Zherebyatyev said, “represents a rejection of the practice under the late Patriarch Alexei II of autonomous co-existence of church-wide synodical departments and analogous profile subdivisions existing directly within the eparchates.”

That of course is part and parcel of Kirill’s much-commented-upon effort to create a genuine “power vertical” within the Church, but it also suggests, Zherebyatyev continues, that “de facto the Missionary Department will cease to be a synodical one and is being transformed into a Patriarchal one,” controlled by and answerable only to Kirill.

At the same time, however, the religious affairs expert cautioned against over-dramatizing what Kirill is about in this case. ”What is taking place,” he said, “does not mean a significant destruction of the existing administrative structure [of the Church] by means of the activization of the departments of the Moscow Patriarchate.”

Zherebyatyev’s cautionary note is important, but there are other indications besides the shake-up in the Missionary Department that point to a radical expansion in missionary activity under Kirill. One of the most intriguing of these developments was reported this week by VOA.

The Moscow Patriarchate “has opened its first seminary outside the former Soviet Union,” the American radio station said, housing the small start-up — it has only a dozen students now ¬— in a former Catholic convent and drawing students primarily from Russia and the other post-Soviet republics but with plans to attract people from elsewhere as well.

Aleksandr Sinyakov, the director of the seminary, told VOA that his church “needs more than ever good specialists who know not only the life of Christian churches in western Europe, and in the West generally, but also who know the theology, the history of the Catholic Church and other Orthodox churches.”

While he did not point to his institution as a missionary center, the seminary at Epinay-sous-Senart will clearly be used to expand contacts with Catholics and other non-Orthodox faithful in Western Europe, something that is very much part of Kirill’s allied effort to form a “conservative” Christian alliance between Moscow and the Vatican.