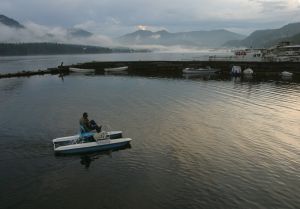 Russia hopes to attract foreign tourists to such far-flung places as Lake Baikal, Altai and Karelia as an alternative to the standard tourist spots of Moscow, St. Petersburg and the Golden Ring - and is planning a network of tourism information centres abroad to woo visitors. But it is not yet clear when the first centres could be opened, while visa issues, insufficient transport infrastructure and high prices hold back Russia's domestic tourism industry.

"Our task is to open tourism information centres abroad that would distribute information about the country and work towards the improving the image of Russia," Alexander Radkov, a deputy head of the Federal Tourism Agency, told The Moscow News.

"Back in Soviet times, there were more than 40 tourism information offices abroad, and they were effective, bringing in tourists from various countries, but all of them closed down following the Soviet collapse," Radkov said. "It's about time we went ahead and did [this]."

The tourist information centres should mainly be in the countries that send most tourists to Russia, such as Germany, France, Britain and Italy, Radkov said.

The global economic crisis has delayed the plans, Radkov said, but insisted the costs of such centres were not exorbitant and that "the government can afford it."

"Moscow and St. Petersburg scare off foreign tourists with high prices," Radkov said. "There is a lack of economy-class hotels. New luxurious hotels are being built, but not economy class. As a result, these destinations cannot compete."

Radkov said that places such as Altai, Baikal and Kamchatka should attract more tourists. "Just about every Russian region has something to offer. We need to promote places such as Veliky Ustyug [the home of Ded Moroz]. Tourism is largely dependent on brands, on myths."

He added that the government is considering a plan to spend 96 billion roubles ($3.2 billion) between 2011 and 2016 on improving tourism infrastructure - primarily on road networks, electricity and water supplies.

Another deputy head of the Federal Tourism Agency, Gennady Pilipenko, last month told an international travel exhibition in London: "Every educated ... European should visit Russia at least once in their life, and not just Moscow but also Siberia and the Far East, to travel across the country [and] see how big it is," RIA Novosti reported.

According to the Russian Tourism Industry Union, 95 percent of all foreign tourists stick to St. Petersburg, Moscow and the Golden Ring, while only a few visit other potentially attractive places, such as Karelia or Lake Baikal.

Irina Tyurina, a spokeswoman for the union, said the promotion of Russia as a tourist destination was currently limited to the Federal Tourism Agency's participation in international exhibitions.

Tyurina said that spending on promoting Russia as a tourist destination is smaller than by much smaller countries, such as Romania and Poland.

"Currently, tourist information on Russia available abroad is very sparse", Tyurina said. "For instance, people from Russia's airlines abroad virtually beg us to provide them with anything they could use to lure foreigners to come here."

Tyurina acknowledged there were "obvious problems, such as a lack of transport infrastructure and the difficulty and high cost of obtaining a Russian visa."

"The opening of tourism information offices abroad should be an important first step in a long and difficult work," Tyurina said.