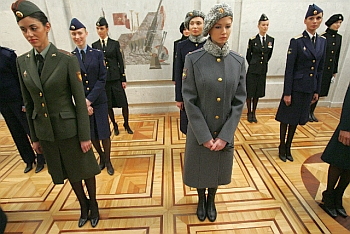 A military uniform is a conservative thing and hard to change. This is why famous designers were asked to come up with something new. One of the inventors of the famous budyonovka, a long-skirted greatcoat with blue and red stitching on the breast, was the artist Viktor Vasnetsov. It recalls the dress of the mighty heroes from Russian folklore. The main requirement of the latest Russian military uniform was that it be practical. This criterion didn’t use to be of prime importance: at various times in history the Russian soldier has been arrayed in an awkward shako (a stiff headdress with a metal plate in front, a high crown and a plume), or tight buckskin breeches, or a hussar’s pelisse. For purposes of doing battle all of these elements were architectural excesses. The appearance of a new military uniform is invariably prompted by a change in ways of conducting military operations and in the conditions of service. This in turn leads to the use of new techniques.

The Russian Army’s new uniform was created by the well-known designer Valentin Yudashkin. The differences between it and its predecessors are substantial. Now the shirts and high-collared jackets have no outside pockets. The pockets of old were impractical, especially since soldiers were forbidden to carry anything in them.

The crowns of service caps are now 2 cm. shorter, recalling the service caps of the 1930s. The new service cap for generals is a copy of the one worn by WWII Soviet army commander Georgy Zhukov. Meanwhile the shape of the papakha (a tall hat of Astrakhan fur), which was reinstated for colonels and generals in 2005, may very well change. Generals will now have gold embroidery on their cuffs, collars and caps. This sort of embroidery existed in the 1970s. Defense Minister Anatoly Serdyukov has let it be known that he, then a rank-and-file soldier, very much liked that uniform.

Boots for generals will now have pointed toes. For the first time in Russian history officers will be issued sweaters. Navy men will again have white dress uniforms, while air force men will have pale blue dress uniforms and “little wings” on their service caps. Air force generals will again wear leather coats. The leather jacket of the ordinary pilot will be shorter, but also fur-lined and with a fur collar. These leather garments are being isued to air force men because leather melts at a temperature of over 100 degrees Centigrade. This property should give the pilot a greater chance of survival in a burning plane. In the ad campaign, the Russian pilot in his new leather jacket looks a lot like an American pilot.

Camouflage will now be made of membranous materials and light synthetic insulation. The coloration of the camouflage will be different so as to distinguish the military man from fisherman, hunters, foresters and the like. The color will now be dark green with small mottles.

Also in store are new shoes made of high-quality soft natural leather; field boots made of soft waterproof leather with light-weight rubber soles and anti-bacterial insoles. Overall, these boots will be 200 to 300 grams (7 to 10 oz.) lighter.

The uniforms of seamen and submariners will differ. For hot regions seamen will be issued a special light blue costume, including shorts and a forage cap with a baseball-type visor. Mooring crews will be outfitted in jumpsuits of durable synthetic fabric that is water-resistant.

As of today more than 80 component articles of the new military uniform have been developed: dress, everyday, field and special.