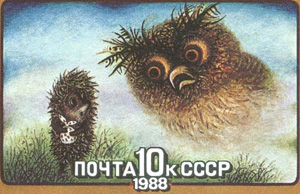 Hedgehog in the Fog on the 1988 USSR stamp

Little Hedgehog loved these early, true spring days best of all! Not a single patch of snow was left in the forest, thunderstorms shook the skies throughout each night, and although the lightning could not be seen it would pour with rain until dawn.

“The forest washes itself!” thought Little Hedgehog. “So do fir trees, tree stubs and meadows. And now the birds fly up from the south and the rain cleanses their feathers too.”

In the mornings he used to come out onto his porch and await the clean, well-rinsed birds.
“They have not arrived yet!” Squirrel was saying.

“C-o-r-r! Their vay is vinding!” burred Crow, who could not pronounce his ‘ws’.

But Little Hedgehog would sniff the air and say,

“It smells of clean birds all the same.”

Hearing this, Woodpecker on top of the pine tree set about pluming his coat.

“I ought to be clean too!” he thought. “Or they will come and put me to shame.” ”Why are you so dusty Woodpecker?” they will say.

Rabbit sat under the bush and brushed his ears.

“Pick a fir cone!” Little Hedgehog shouted to him. “One manages the job better with a fir cone”

“And what would you advise me to scrub my horns with?” asked Elk, emerging in the meadow before Little Hedgehog’s lodge.

“Sand,” said Little Hedgehog. “There’s nothing like sand for polishing horns.” So Elk walked towards the river, kneeled over the bank and asked a favour of Fox, who was preoccupied with killing fleas.

“Can you scrub my horns please?” murmured Elk. “I will be embarrassed if the birds catch me with dirty horns...”

He was smart and knew how to groom himself thoroughly. He sat plunged up to his neck in icy water, holding a tuft of straw in one raised pad. His fleas, frozen in the water, were creeping up his body towards the straw. As soon as the whole pack gathered in the tuft Fox threw it into the water, and the current washed it away.

“That’s it,” said Fox climbing out onto the bank. “So, where are your horns?” Elk declined his head and Fox began to scrub it with sand.

“Do you want your horns to shine?” he asked.

“No,” Little Hedgehog interposed. “Shining horns are not beautiful. They should appear as if they were wrapped in fog.”

“That is, they should not shine?” Fox sought to clarify.

“They should not,” Little Hedgehog confirmed.

Elk even emitted a few snuffles, so pleasant did the scrubbing feel. Meanwhile, Woodpecker had groomed all his feathers and now looked young and smart, while Rabbit had cleaned his ears and tail. And Little Hedgehog had long since dusted every single one of his prickles with a little rag, ending up so clean that not even the smartest bird would dare argue that she was cleaner.

Hare sat on the bank of the brook and gazed into the water. Another Hare was staring at him out of the water, and when Hare moved his ears and nodded his head the other Hare did likewise.

“What are you doing Hare?” he asked.

“Don’t you see?” Hare sounded puzzled. “I am moving my ears and nodding my head.”

“Why?!” Hare was surprised. “There is another Hare sitting in the water. Look, he is nodding his head and moving his ears!”

Hare leaned towards the water and asked the other Hare,

“Listen, is there another Little Bear by any chance?”

“No!” said Hare. “There is no Little Bear there. See for yourself, if you wish.”

So Little Bear approached the brook. But he had hardly bent down towards the water before another Little Bear caught his eye.

“Here he is!” cried Little Bear, and moved his ears.

And the other Little Bear immediately did the same with his.

Then Hare and Little Bear settled down together side by side, and began moving their ears and nodding their heads until it grew totally dark. Then the other Hare and the other Little Bear stood up, waved them goodbye and walked away to their beds.


How Little Hedgehog and Little Bear Dusted the Stars

Every evening for a month, Little Hedgehog had climbed-up a pine tree to dust the stars.

“Naturally, if I don’t polish them every evening they will grow dim,” he thought.

In the morning he used to come out onto his porch, cut a bunch of green twigs to make into a broom and wash his little star-wiper. It was the only cloth he had, which is why he washed and dried it on the pine each morning.

With his preparations complete, Little Hedgehog ate lunch and went to bed. He would wake-up at twilight. After supper, with the wiper in one paw and the broom in the other, he scrambled from branch to branch until he reached the very top of the pine tree.

Here came the most interesting part of his evening. Firstly, he must beat the stars with his broom. But only with the utmost caution, so as not to accidentally knock them out of the sky.

Then he should transfer the broom to his left paw and take the wiper in his right, and polish the stars until they shone. The job was laborious and took all night.

“How can it be otherwise?” grumbled Little Hedgehog to himself on top of the pine. “If Little Bear and I don’t dust the stars, then who will?”

Meanwhile, Little Bear sat atop the pine tree above his house, dusted the stars and thought, “It is amazing how Little Hedgehog hit upon such a good idea! If he hadn’t thought of cleaning the stars they would have faded from view long ago.” “What a dusty thing!” He blew upon a star and rubbed it with his cloth.

Little Bear tried his best but he wasn’t always as skilful as Little Hedgehog. So whenever a star fell from the sky, everybody in the forest knew that it was Little Bear who had accidentally knocked it down.

It had been snowing since morning. Little Bear sat on a tree stump in the meadow with his head upraised, counting the snowflakes that fell on his nose and licking them off. The snowflakes were sweet and fluffy, and before touching down they stood up on tiptoes. It was such fun!

“The seventh,” whispered Little Bear, taking his time to admire the flake and licking his nose. Only these snowflakes were enchanted: they didn’t melt and remained fluffy in Little Bear’s tummy.

“Hello dear!” Six snowflakes greeted their snowy friend when it settled down alongside them. “Is it still windless in the forest?”

“Little Bear is still sitting on the stump? What a funny bear cub!”

Little Bear could hear someone chatting away in his stomach but paid no attention. Meanwhile, the snow kept falling. More and more snowflakes landed on Little Bear’s nose and said to him, “How do you do Little Bear!”

“Pleased to meet you. You are the sixty-eighth to arrive here,” said Little Bear, and licked his lips. Towards the evening he had eaten three hundred snowflakes and got so cold that he struggled home and fell asleep straightaway.

He dreamt of himself as a fluffy, soft snowflake, which fell on the nose of some Little Bear and said, ‘How do you do Little Bear?’ And heard the reply, “Nice to meet you, you are the three hundred and twentieth here…” Then, Lam-pa-ra-pam! the music began to play.

And Little Bear went round and round in a sweet fairy dance, and three hundred snowflakes whirled together with him. They twinkled ahead, behind and beside him. And when he was ready to drop they picked him up. So round and round he danced again…

Little Bear was ill all winter. His nose became dry and hot, and snowflakes danced in his tummy. Not until spring, when the whole forest jingled with melting snow and the birds arrived, did he open his eyes and see Little Hedgehog sitting on the stool. He was smiling and moving his prickles.

“What are you doing here?” asked Little Bear.

“Waiting for you to recover,” said Little Hedgehog.

“How long have you been there?”

“For the entire winter. As soon as I learnt that you had gorged yourself on snowflakes I brought all my food over to your house.”

“And you spent all winter on the stool by my side?”

“I did. I gave you fir infusions to drink and rubbed your tummy with dried herbs.”

“It’s little wonder!” Little Hedgehog sighed. “For the whole winter you kept saying that you were a snowflake. I feared that you would melt with the spring.”