Requiem for a jazz great 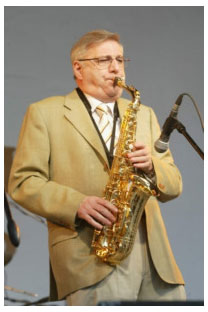 On Jan. 11, Russian jazz icon George Garanian--a musician who nourished jazz as part of Soviet culture--suffered a fatal heart attack while on tour with his popular big band. He was 75. A productive career spanning more than half a century has ensured that Garanian, a highly renowned saxophonist, composer and arranger, will be fondly remembered.

Son of an engineer and a teacher, Garanian was interested in music from an early age. His first encounter with the alto saxophone came in his early twenties as a student at the Moscow Technical Institute: After being asked to take a friend’s horn to the repair shop, he found himself unable to give it back.

Kirill Moshkov, editor of jazz.ru, Russia’s leading jazz magazine and web portal, is unequivocal about Garanian’s significance. In the same way the immortal melody of the Dave Brubeck Quartet’s “Take Five” is instantly recognizable to so many Americans, Garanian’s whimsical, lithe alto tone was cherished by the Soviet population as it featured in soundtracks to several classic films.

“The same thing happens all over the world,” writes Moshkov on his blog. “The people moving music forward are unknown to the masses; they only know songs like “Take Five” and never the names of the musicians playing. Soviet jazz was like that too.”

While Garanian’s early career may have suffered from this typical affliction -– a man known by sound yet not by name –- he would soon rise to prominence. As a youngster, he played in the foremost ensembles of the era, including those of Oleg Lundstrom and Yury Saulsky – with whom he won a silver medal at the 1957 World Festival of Youth and Students in Moscow. Saulsky went on to hail his former protégé as “without doubt, one of the most important personas in contemporary Russian jazz.”

In the 1970s, Garanian began working with the Soviet state record company, Melodiya, leading a cult band of the same name which sold millions. He also became heavily involved in film composition as conductor of the State Cinematic Orchestra. At this time, he completed his greatest educational achievement, a textbook on orchestration that is still widely used.

Garanian’s fame peaked in 1993, when he became a National Artist of the Russian Federation -– the first jazz musician to receive this prestigious title. It was a fitting accolade for a tireless worker who traveled the world in the name of Russian jazz, as well as helping firmly establish it as part of domestic popular culture.

Singer Lev Leshenko, a fellow National Artist, met Garanian working on radio projects in the 70s. “He was a man of sparkling humor and literally encyclopedic knowledge, who had a new understanding and a new musical aesthetic,” he said in a television interview with Channel 5. “As a young boy coming to the radio, I absorbed it all.”

Garanian, who grew up in a Russian-Armenian family, will be remembered for modest humility and a peaceful outlook. The nation got to know his personality not only through music, but from his own TV and radio shows, which he used to spread the jazz vision.

As one of the first Russian musicians to gain serious attention from the Western world — U.S. critic John Hammond described his talent as “phenomenal” — George Garanian played a pivotal role in the development of jazz in his country. Through turbulent times, with the music variously regarded as high culture or a dangerous poison from America, he led the way, both on stage and off, and has left a stellar legacy for future generations.