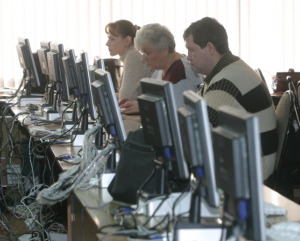 According to Russian President Dmitry Medvedev, the performance of regional governors will in the future be evaluated in part based on the availability of technology resources in their respective regions. Medvedev said that governors who overlook the critical goal of improving the information technology profile in their regions aren’t fit to govern in today’s high tech world.

On Dec. 23, 2009, the State Council and the Council for Development of an Information Society held a joint meeting to discuss the transition to “e-government.” President Medvedev acknowledged that government authorities currently make little use of modern information technology, relying instead of mountains of paper and provide few public services online.

“Central and municipal authorities provide over 1,500 types of services, but people still have to line up for certificates and permits, and make multiple trips to resolve a single regulatory issue. Moreover, it’s often almost impossible to even find a description of the formal process,” said Medvedev. He reminded the attendees that a central e-government portal, Gosuslugi.ru, was launched in December, but “it currently functions only as a source of information about the government, which is an improvement, but not enough. At the moment, the Web site does not offer any online services,” said the president.

According to Medvedev, even the legal framework still requires updating before the transition to digitized service in 2010 and 2011, which is considered to be a key objective in creating an information-based society. It is equally important to develop a consistent approach to moving public services online, overcome the digital divide between the regions and improve the computer skills of government officials at the regional and municipal levels.

No plan has yet been finalized to build the e-government infrastructure. “Only three ministries have introduced systems of electronic document exchange: The Ministry of Economic Development, the Ministry of Agriculture and the Ministry of Telecommunications. This is much too slow. We need to move faster on this one,” said Medvedev.

The regions must also work on their local e-society and e-government planning and prioritize services that will be made available online.

Deputy Prime Minister Sergei Sobyanin, who stepped forward a year ago to become the top coordinator for IT reform across all government bodies, noted that it is essential “to introduce the key regional and municipal services approved by the Russian Government.” Along with the federal portal, the regions are intended to set up similar local resources. As an important requirement, “federal and regional gateways must be integrated into a common system,” he said.

Meeting participants noted that each region has thus far been free to choose its own approach. Oleg Chirkunov, governor of the Perm Region, told journalists that they had initially created the core system of document exchange before starting work on the interface components. Today, all internal documents in Perm are processed digitally.

Kirov Regional Governor Nikita Belykh said it is necessary to establish general criteria for building document management systems in the regions. In his view, the federal authorities could either lay down the standards or use the prototype e-system that has been developed in Tatarstan.

In any case, regional authorities will have to take the concept of a digital government seriously. While recognizing the need for revamping many elements of the welfare system before introducing Web-based services, Sobyanin added that quite a few regions show lukewarm interest in the idea. “This is not a question of funding, but one of commitment to getting things done,“ he said. Medvedev agreed with the deputy prime minister, adding: “Where regional governments show genuine interest in the subject, things have really changed. And where regional authorities regard electronic access as unnecessary bells and whistles and think they have enough on their plates without e-government games, nothing will ever change,” said the president.

“I would like to make it clear to all of you: those who ignore this crucial objective will be regarded as unfit for their high government positions in the modern world”, warned Medvedev.

The Russian President remarked that “It might be a harsh statement to make, but, unfortunately, it is true because the entire world is moving in this direction”. “We have fallen behind and we need to close the gap quickly, otherwise we will become hopelessly uncompetitive”, he concluded.

According to the Ministry of Regional Development, one of the actions defined by the President following the meeting was to include a new assessment criterion for evaluating administrative performance by regional governors. The ministry spokesman says that currently there is no standard measure of IT maturity in the regions, but the Government will soon adopt the appropriate regulations.

Today, over 300 metrics are applied to assess efficiency of regional bosses. In a recent speech, Moscow Mayor Yury Luzhkov insisted that development of an information society should be the main criterion. “This goal must come first ,” he said. The mayor added that the only similar indicator currently used is the level of telephone service availability. “It was clear the President meant it when he said that governors will get the axe if they don’t make real progress”, said Igor Yurgens, Head of the Institute of Modern Development, after the meeting. In an interview with Gazeta.ru, he confirmed that the e-government theme is no joke and government officials might lose their jobs if they fail to deliver on it.