Ukraine rivals to face off Feb. 7 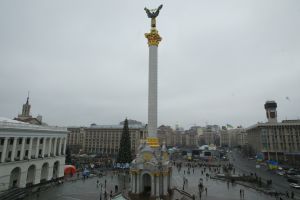 After the Ukrainian Central Election Commission (CEC) totaled all the votes cast in the Jan. 17 presidential elections, Victor Yanukovich emerged in first place with more than 35 percent of the total. Yulia Timoshenko came in second with 25 percent. Just like the results six years ago, in the days of the “Orange Revolution,” the bulk of the vote split between two favorites, but as these two head for a run-off, the outcome will depend on the choice of those who voted for the less popular figures and on the ability of Timoshenko to win the race on the streets, as happened in 2004.

This time, Victor Yanukovich learned the lessons of the Maidan, which in 2004 was occupied for weeks by supporters of Yulia Timoshenko and current President Victor Yushchenko . He hit the streets early in the game. On Monday morning, immediately following the election, buses and vans began arriving in Kiev from the east, where Yanukovich’s Party of the Regions has its traditional base. White-and-blue vehicles drove up to the Central Election Committee headquarters, dropped off passengers and headed back east to pick up more. According to a vague explanation by Yanukovich, the supporters showed up to prevent any rigging practices. On the square before the CEC, they set up a stage, blue tents and portable toilets, sending a clear message that they intended to stay until they won. The campers get three meals a day and do not conceal the fact that food is not their only motivation. They are paid up to 10 euros for each day of “standing by.”

On Thursday, Yanukovich made another stab at his rival. The Party of the Regions demanded that the Ministry of Internal Affairs should investigate foreign interference in the electoral process. The statement was made by Vladimir Sivkovich, a “regional” MP, on the floor of the Ukrainian parliament.

“In fact, it's the first time that a presidential candidate, specifically, Yulia Timoshenko, has agreed, behind the backs of other parties and citizens, with President [Mikheil] Saakashvili to send street fighters [from Georgia],” said Sivkovich.

He cited the transcript of a telephone conversation between the Ukrainian and Georgian authorities who allegedly agreed that Georgia would dispatch police officers in the guise of election observers.

As for Yulia Timoshenko, her primary objective now is to secure the votes of the candidates who dropped out of the race. More precisely, her chances hinge on the 13.05 percent of voters who cast their ballots for Sergei Tigipko, a former economics minister. She said that his supporters will have no choice but to vote for her in the run-off. For his part, Tigipko promised to remain above the fray between the two heavyweights. Both camps seem to be in negotiations with him.

Regardless of the economic crisis, the election campaigns attracted impressive sponsorship. Timoshenko has a five-star headquarters and a media center headquartered in the Hyatt hotel. Neither the Hyatt nor the Intercontinental, which hosts the no less glamorous headquarters of Victor Yanukovich, existed in 2004. But the times have changed since then, and so have the rules of the game, where the winning strategy is to come to terms with all the sides, including Russia, Europe and Tigipko. Yanukovich has promised that he will progressively steer Ukraine towards integration with the EU as well as toward good ties with Russia, thus taking some drive out of the Timoshenko's pro-Western campaign.

The candidates have two weeks to wrestle for the Ukrainian presidency before the second round determines the winner on Feb. 7. Although the polls have shown Yanukovich to be in the lead, most analysts agree that the outcome is still unpredictable.