Haiti gives a new chance for the US and the world 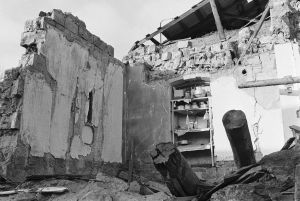 An earthquake is when your house creaks and swings like a boat, with pictures and lamps falling to the floor. All this lasts for about three minutes. A solid, earthquake-proof building would normally require whitewashing, but after that, nothing else. For thin-walled homes and islands, this doesn’t work, as evidenced by the situation in Haiti. Three minute-long underground shocks wreaked enough havoc to create a new international situation for the US and the rest of the world. The Haiti disaster offers a unique chance for Washington to recover from recent failures in Iraq and Afghanistan, growing anti-American sentiment all over the world, and even loss of its superpower status.

And US officials realize this. Indeed, Secretary of State Hillary Clinton cut short her Pacific trip last week, rushing home to deal with Haiti. Other top US officials were just as zealous, among them Defense Secretary Robert Gates and former presidents Bill Clinton and George Bush. President Barack Obama also seemed to appreciate the challenge presented by Haiti. By savings thousands of people and raising the island from its ruins, America would restore its international reputation, shaken by generations of annoying US travelers and finally destroyed by George Bush, who was so unpopular both at home and abroad.

This is a daunting task, but that’s why it is a global challenge. Haiti is unique. In some ways it illustrates a dead end of human civilization; its history is a circle: from extreme poverty to barbarism and cruelty to political dictatorship and back to poverty. No progress has been made over the past 50 years.

Haiti is like Afghanistan, or Somalia, with poor remnants of infrastructure and a national government without real power. Such nations are a thorn in the side of the civilized world. Europeans are strongly against the EU’s involvement in the Afghan conflict. Washington hawks see war and free elections as a panacea against all troubles. Europeans see the flaws of that primitive recipe, yet they cannot offer anything better.

The situation in Haiti today is unprecedented. The disaster most like the Haitian earthquake was the disastrous Asian tsunami of 2004, which killed 160,000 people in the Aceh province of Indonesia alone. Though Indonesia is not a perfect country, the multinational rescue operation there was a huge success and even had the effect of eliminating separatism in Aceh.

This is exactly what Haiti needs today. It needs more than a rescue operation, it needs an effective re-start. This would also set a good example for Somalia, Afghanistan and some other nations as well.

But what is happening in Haiti? Alas, Washington seems to be dragging its feet and losing precious time. The Americans began well, repeating the process used during the 2004 tsunami and sending navy ships to the disaster area. But Washington’s enthusiasm seems to have cooled. New Haitian refugees have been denied shelter in the US, although US authorities decided not to deport the 100,000 to 200,000 illegal immigrants from Haiti who had arrived in the US before the quake.

There are other problems, too. US rescuers occupied the island’s main airport, at the capital Port-au-Prince, and for a time turned away non-American aid flights, thus hampering the relief effort. Clearly, the Americans’ straightforward style even when it could be justified, can create unwanted problems. But could another country do better? Many questions remain and the answers will set precedents for the future.