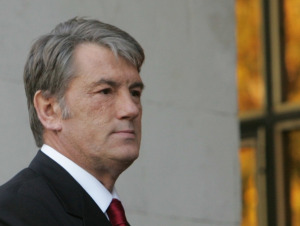 Following his devastating defeat in the Jan. 17 first round presidential election, Ukraine’s President Viktor Yushchenko is putting up a last stand fight from beyond the political grave.

Yushchenko received only 5 percent of the vote in the first round of the presidential elections, a humiliation that that caused him to drop out of the race as his bitter enemies – Prime Minister Yulia Timoshenko and opposition leader Viktor Yanukovch – moved on to the second round. But Yushchenko is making it clear that he is not going to bow out with a smile – he is using his control over the National Bank of Ukraine to starve Timoshenko’s government of IMF funds she needs to keep budget expenditure and gas payments flowing.

The conflict arose as a result of a surprise International Monetary Fund (IMF) decision Dec. 30 to drop the floor of reserve requirements for the National Bank of Ukraine (NBU), and thus free up $2 billion to fund the budget deficit and gas payments. “This important step will enable the Ukrainian authorities to use existing resources to make external payments due – including gas payments — within the framework of Ukraine’s program with the fund. It does not involve any new disbursement by the IMF,” read a statement by Max Alier, IMF representative for Ukraine at the time.

But after Yushchenko’s disastrous showing in the first round of presidential elections, the transfer of the urgently needed $2 billion from NBU to the finance ministry turned out to be not so easy. On Jan. 20, Ukraine’s acting finance minister Ihor Umanskyi said: “The IMF took the decision, but the National Bank has failed to comply. Not a kopeek has been transferred.”

The NBU, headed by Yushchenko’s friend and former teacher Volodymr Stelmakh, is the president’s last bastion of power. Yushchenko has been trying for months to keep funds away from the government, believing Timoshenko will use them to pork-barrel her way to an election victory, with the bill paid by ordinary Ukrainians later. Most analysts have been amazed at the IMF’s leniency towards Timoshenko, who has consistently reneged on reform commitments made towards the fund. Timoshenko’s rivals even accused the IMF of indirect interference in the election campaign. Finally, in November 2009, Yushchenko deliberately sabotaged attempts by the government to secure disbursement of an IMF loan tranche, by signing into law a populist opposition bill hiking pensions and social payments by 20 percent. As a result, the IMF gave up on disbursement until after the elections.

But an emergency mission by Ukraine’s government to Washington at the end of 2009 secured a reprieve of sorts – permission was granted by the IMF to switch $2 billion of IMF funds from the NBU to Ukraine’s government. Royal Bank of Scotland analyst Tim Ash called this latest IMF concession “extraordinary.”

Due to Timoshenko’s stubborn refusal to cut budget expenditures despite the economic collapse or to increase domestic energy prices despite agreeing in January 2009 to buy Russian gas at the highest price paid in Europe, Ukraine desperately needs the IMF’s money to fund budget expenditures and monthly gas payments.

Details were emerging this week of just how difficult Ukraine’s budget position is. “State Treasury accounts with the NBU at the end of 2009 stood at 1.1 billion hyrna," said analysts Oleksey Blinov of brokerage Astrum Capital, “which is next to nothing compared to monthly fiscal expenditures of above 20 billion hyrna. This means that the government urgently needs another significant money injection in order to finance its outlays.”

“The cupboard is bare. Total austerity will be the only way to preserve Ukraine's reserves and prevent another run on the currency – which would be ruinous, given the mountain of public and private debt denominated in foreign currency,” wrote emerging markets analyst Christopher Granville in the Wall Street Journal last week.

Timoshenko’s acting finance minister Umanskyi claimed that the IMF has instructed the NBU to transfer the money. But on Jan. 21, IMF’s Ukraine representative Alier refuted the minister, saying it was no concern of the IMF which exact institution disposed of its funds. “Any decisions regarding such a shift are strictly a matter for the Ukrainian authorities," Alier said.

On Jan. 22, the NBU released a statement justifying its refusal, claiming that IMF funds are by definition intended for balance of payments purposes, and may not be used to fund a budget deficit. Any such transfer, claims the NBU, would directly contradict laws governing its activity. “This affects the sensitive and fundamental issue of the NBU’s institutional and operational independence,” said Blinov.

As the government has next to no cash left, and cooperation with the IMF is postponed until elections are over, the weeks in the run-up to the second round of elections are going to be tough.

Analysts expect Timoshenko to fight tooth and nail to prevent any arrears in social payments before the crucial run-off vote on Feb. 7. And she has has one trump card up her sleeve in her feud with Yushchenko: Ukraine’s gas pipelines, through which 80 percent of Russia’s gas flows to Europe. Feb. 7 is not only the wide-open second round of elections that will decide Tymoshenko’s political future: It is also the payment date for Ukraine’s gas distribution monopolist Naftogaz to pay Russia’s Gazprom for January’s gas – a sum of over $500 million. If, on the eve of elections, Timoshenko has to choose between paying out pensions and salaries or paying for gas on time, most observers are certain she will choose the former.

Should Ukraine’s Naftogaz, however, fail to make the payment to Gazprom on time, it triggers a tripwire that will see its payment schedule switch to advance payment as of the following month. This means that in early March, Naftogaz will be required to pay for gas for both February and March: An apparent impossibility that could lead to a snowballing debt burden of payment arrears, interest and penalties.

Yushchenko has long argued that Ukraine’s continued ownership of its gas transit system is a cornerstone of Ukrainian sovereignty vis-à-vis Russia, and has consistently accused Timoshenko of seeking to sell out the gas transit to Gazprom. So, in the final analysis, he may decide that bailing out Timoshenko by transferring the NBU’s $2 billion is justifiable if the alternative were to see Ukraine’s strategic gas transit system financially compromised before Gazprom. So, like much of his presidency, his last stand may turn out to be a half-hearted measure after all.