The man behind the Tatarstan model 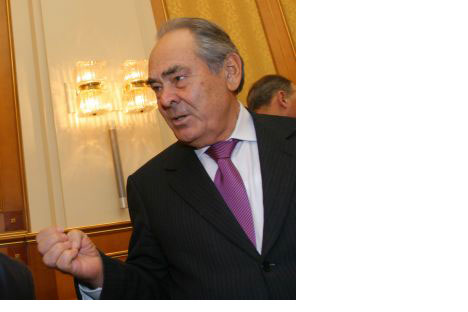 Mintimir Shaimiyev, the veteran Russian politician and president of the Russian republic of Tatarstan, resigned his post Jan. 22, two days before his 73rd birthday. Two months before his current term in office was due to expire, he asked Russian President Dmitry Medvedev not to nominate him for reappointment.

Shaimiyev’s departure from the political scene is not a simple changing of the regional guard. Shaimyiev ran Tatarstan for two decades and applied to Shaimiyev, the slightly rephrased formula “I am the republic” is not just a metaphor. By 1989, he had risen up the party and bureaucratic ranks to become First Secretary of the Tatar Oblast Committee of the Communist Party. From 1990 to 1991, Shaimiyev headed the republic’s Supreme Soviet. On June 12, 1991, he became Tatarstan’s first elected president. His election took place on the same day as that of Russia’s first elected president, Boris Yeltsin. Relations between these two unusual and controversial leaders determined the foundations and dynamics of Russian federalism – its national and regional politics – for many years to come. Even after Yeltsin resigned, Shaimiyev continued to consider him a great politician and a great man, despite the reigning view in the media and in the public sphere.

How historians will view Mintimir Shaimiyev remains to be seen. But whatever their verdict, it is clear that as a political figure, he extended far beyond the bounds of a single republic. For years the “Tatarstan model” was a political and managerial model for Russia’s other regions. Beginning with Tatarstan, Moscow launched its “treaty federation” – a compromise model of relations between the country’s center and the regions using special treaties. In 1990, Moscow signed 46 such treaties, the first of which was with Tatarstan. During the two Chechen campaigns, Tatarstan was often contrasted with Chechnya as a region with a complex ethnic composition that had found ways not to enter into an armed confrontation with Moscow.

In the late 1980s and early 1990s, the situation in Tatarstan, as in many other autonomous republics within the former Soviet Union, was tense. The “Tatar question” arose as a result of the collapse of the Soviet Union and the formation of new nation-states. Many autonomous republics that had existed with the Russian Soviet Federal Socialist Republic tried to gain independence, as former Soviet republics such as the Central Asian and Baltic States had. First, they tried to raise their political and legal status to that of a Soviet republic. Then they began to hold referenda showing support for sovereignty. On March 21, 1992, Tatarstan held a referendum on the republic’s sovereignty: 62 percent favored the status of a republic as a subject of international law. Ten days later, Tatarstan did not sign a federal treaty with Moscow and in December 1993, it did not participate in Russia’s first parliamentary elections and the referendum on the Russian Constitution. Tatarstan had its own radicals – such as Fauzi Bairamov, head of the Ittifak movement – who said that the Tatarstan authorities should act decisively, “in the Chechen way.” In their book, The Time of the South, Russian political scientists Alexei Malashenko and Dmitry Trenin quote an activist in one of the Tatar ethnic-nationalist movements in the early 1990s: “If we Tatars had mountains and the Chechen character, we too would have shown Russia!”

Fortunately, the nature of the Tatar elite’s political style worked to the advantage of the Russian state and its unity. Mintimir Shaimiyev, an experienced apparatchik of the Soviet school, quickly realized that the best way to curb the radicals was to adopt their slogans while hiring the most capable of the intellectual nationalists to work in the bureaucracy. The Orientalist Rafael Khakimov was a longtime adviser to Shaimiyev. Once he had outplayed the nationalists, Shaimiyev began the process of assimilation into Russia’s political class. He signed a demarcation treaty with Moscow on February 15, 1994. In 1999, he became a member of the Fatherland-All Russia party and then, like most regional leaders, he made the “right choice” and joined United Russia. Tatarstan’s economic relations with Moscow had been seamless even before 1994. The Russians who lived there did not flee en masse. Many of them were incorporated into the republic’s elite. “Tatarstanism” as a political identity was used to counter nationalist ideas. “In recent years, our leaders have spent a fair amount of time in federal ministries,” said Rafael Khakimov. The latest demarcation treaty between Moscow and Kazan, ratified on June 24, 2007, excludes such points as “the sovereignty of Tatarstan,” although it does retain the right to decide questions concerning the development of the republic’s natural resources jointly with Moscow.

The Tatarstan compromise of the 1990s averted a serious conflict and acted as a successful ethno-political preventive measure. “The early ‘90s were an extremely complex time,” said Khakimov. “President Shaimiyev likes to say that we were living on a razor’s edge. And indeed we were. The (1994) treaty resolved what Western experts considered to be an insoluble problem.” In fact, the situation in the early 1990s should be viewed not from the standpoint of today, but from that of the complex context of that time. The federal center, left to fill the vacuum left by the collapse of the Soviet Union, had no choice but to look for compromises with the regions.

This experience was also of real use to the “near abroad” where the leaders were less skillful in resolving ethno-political conflicts. Azerbaijan has discussed the “Tatarstan model” as a possible way of solving the Nagorno-Karabakh conflict. And although from our point of view these two situations have more differences than similarities, the idea itself is interesting. The “Tatarstan model” has also been seen as an alternative to a military solution in Abkhazia, South Ossetia, Transdniester and Chechnya.


Having governed Tatarstan for two decades, weathering the collapse of the Soviet Union, the sovereignty referendum, the struggle to preserve a united Russia and the special status of his republic, Shaimiyev resigned of his own accord. Many observers have compared his departure to that of Boris Yeltsin in 1999. Be that as it may, Shaimiyev’s decision is of great significance in the context of Russia’s political modernization and of its transformation into a complex administrative mechanism where not personalities but institutions matter most.

Sergei Markedonov is a political scientist and expert on the Caucausus.