Interview: McFaul on U.S., Russian stereotypes and his controversial co-chair 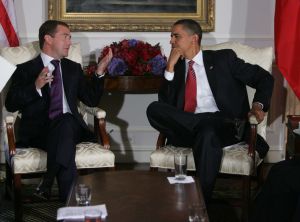 The first meeting of the U.S.-Russia Bilateral Presidential Commission’s Civil Society Working Group was held in Washington on January 27. The group is part of a larger effort begun last summer by U.S. President Barack Obama and Russian President Dmitry Medvedev to reset relations between the two countries and explore new opportunities for partnership. The two co-chairs of the group are Michael McFaul, special assistant to Obama and senior director for Russian affairs at the National Security Council, and Vladislav Surkov, first deputy chairman of the Russian presidential administration. RFE/RL correspondent Heather Maher spoke to McFaul just after the meeting ended and asked him about the day’s progress and the controversy in Congress over his Russian co-chair.

RFE/RL: This first meeting of the Civil Society Working Group dealt with the subject of civil society's role in helping end state corruption. Did the two sides reach any agreement on the role that civil society groups can and should play, and were there any disagreements?

Michael McFaul: We talked first in a government-to-government setting in the morning on that subject, and we had U.S. officials talking about the role that American NGOs have played in fighting corruption and actually changing the U.S. government structure going back 30 or 40 years. We had one example of that, where the office of government ethics was created as a result of NGO lobbying. And then the Russian side did a similar thing where the government people talked about the way they understood how they interact with NGOs to fight corruption. And in the afternoon we kind of flipped the tables by inviting in Russian and American representatives and leaders of NGOs that work in this field to talk about their perspective of what the government does and does not do.

So I say — by way of background — that it was an exchange of historical and contemporary experiences from both countries. That was the main subject.

RFE/RL: I heard that the agenda also included a discussion of prisoners’ rights. Did that come up?

McFaul: No, the substance today was corruption, fighting corruption, protecting children, and then a session on fighting stereotypes in our respective countries. For the next session that we will have sometime in the spring in Russia, the subject will be prison reform and migration. So those two topics we didn’t get to today.

RFE/RL: TI has rated Russia the most corrupt of the world’s 20 leading industrialized nations. Did their representatives voice any criticism or skepticism about Russia’s commitment to fighting corruption?

McFaul: Uh, yeah. (Laughs). I mean, I don’t want to read out the tit-tat of the meeting because I would want you to talk to them and have them read it out to you, and I encourage you, please do so. But I would say we had a very frank and honest discussion about what Transparency International does around the world that I think was informative to our Russian government counterparts. And to me too, by the way. It was informative to me. I didn’t know the whole history.

RFE/RL: I'd like to ask what you discussed about stereotypes, but first I want to ask you about an interview that your co-chair and counterpart Vladislav Surkov gave to the Russian newspaper "Izvestia" last week, in which he said that at this meeting the two sides “will not lecture each other.” Was it the case that you didn’t lecture each other?

McFaul: From my perspective, it was the case. That is, we think of this particular modality of interaction between Russians and Americans as an exchange of information on how we deal with these problems respectively in our countries, and then [the idea is] to create a forum for Russian and American NGOs to meet with each other. And I think it’s important to note that they met, while we were meeting in our government-to-government meeting, they, in parallel, were also meeting with each other, without the government in the room. And then we want to bring them all together so that we can have this exchange.

I think it’s important for your listeners to understand — you know, there are many other mechanisms, means, presidential statements, meetings of our presidents, where we can express our disagreement and our concern about human rights issues, corruption issues, the whole list of issues we have, and we do that rather militantly, I would say, in the Obama administration. I think it’s wrong to think that this is our only way that we can engage on fostering the development of civil society and democracy in Russia. I personally don’t see it that way at all. I see it as one of many mechanisms.

RFE/RL: As I’m sure you’re aware, more than 60 members of Congress sent a letter to President Obama in December protesting the appointment of Mr. Surkov as the group’s co-chair. The legislators called him “one of the masterminds behind Russia’s authoritarian course” and urged Obama to boycott these meetings until he was replaced. Did that controversy come up either in today’s meeting or in the run-up to it? And also, do you think the letter cast a pall over the group’s ability to work productively?


McFaul: It didn’t come up as an issue for discussion. Of course, I’m well aware of the controversy. And I guess my reaction to it is, let’s be clear — this was an initiative by the United States government to try to create this working group. It was my initiative, I’ll tell you very honestly. It was my idea. And we were happy that the Russians agreed to have this as part of the bilateral presidential commission.

That said, it’s not for us to choose who the Russians decide should be the co-chairs of any of these working groups. I can’t even quite understand how one would do that. I know the controversy around Mr. Surkov, and I’ll leave that for others to comment on. Maybe there was a time in American history when we were that powerful and we could tell other countries what to do all the time and who to name to bi-national commissions, but we are certainly not trying to do that in our relationship with Russia today.

McFaul: Well, I would say it’s just the beginning of what needs to be a much longer discussion and one we both agreed needs to be based on more analysis and not just anecdotes and theories based on personal experiences or based on [a] one-off thing that happened to me, or you, at some point in the past. I mean, I think it’s a real, serious problem that needs to be addressed.

This was an issue that we wanted to discuss – the American side. But we came away thinking, "We need to look at this much more closely." And to be frank, I think it’s more of an issue that we want to have real social scientists tackle in perhaps a joint commission. You know, we really wrestle with the public opinion poll data, and cause and effect. As a former social scientist – I’m a professor at Stanford – to me this is a question that begs for analytic analysis and not necessarily talking points from one government to the other.

RFE/RL: Finally, how do you feel overall about how this first meeting went? Are you optimistic that it can bring about meaningful cooperation between the United States and Russia on the role of civil society groups?

McFaul: Yes, I am optimistic. I think, as President Obama said when he was in Moscow, and as he has said repeatedly as part of the way he thinks about foreign policy, he believes in engagement, and he believes even in engagement that leads to disagreement. And most certainly today, some of our engagement with the Russian government led to disagreement. But it’s better to have disagreement, and know that we disagree, and have a frank discussion about our disagreements, than to sit in our cubbyholes and not have any real connectivity with those that we think we’re disagreeing with.

You’ve mentioned that Mr. Surkov has a reputation in the United States. Let’s be frank. I have a reputation in Russia, given what I’ve written and what I’ve said about Mr. Surkov’s bosses, for that matter. So I think for them to actually interact with someone like me is useful, even if at the end we disagree. I think that kind of exchange is useful for breaking down stereotypes and for advancing American national interests, and I hope in the long run, Russian national interests, as well.

Original article can be found at http://www.rferl.org/content/Interview_Michael_McFaul_On_The_Surkov_Controversy_And_The_Importance_Of_Engagement/1942014.html