It's Just Some Holiday 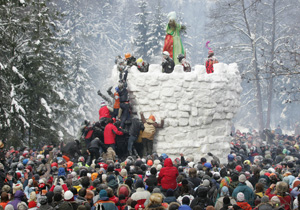 The winter holidays are barely over and already there’s another slew in the offing: Men’s Day (Feb. 23), Women’s Day (March 8), Valentine’s Day and, of course, Maslenitsa — a week of merrymaking and pancake eating ahead of Lent.

To the unprepared foreigner newly arrived in Russia for an extended stay it may well appear that life here is one long holiday — in the literal sense of the word. The New Year, for instance, may be celebrated for the better part of a month. Some begin on December 25 with Catholic Christmas. And this may have nothing to do with their actual confession; it’s just a good excuse for a long dinner. Then comes New Year’s Eve, Orthodox Christmas (Jan. 7) and the utterly mysterious purely Russian holiday known as the Old New Year (Jan. 13). A century ago Russia still had its own calendar, which differed from the European one by 12 days. The old calendar was dropped decades ago, but the habit of celebrating the New Year has become doubly entrenched.

February has, as we’ve said, its own holidays, and then there’s Easter, the May holidays and Russia Day (June 12). And then, of course, there are the profession-related holidays: Teacher’s Day, Doctor’s Day, Paratrooper’s Day, when it’s best to avoid city parks and the throngs of combative and not especially sober young men swaggering about in their paratrooper uniforms.

And let’s not forget the family holidays, of which there are also many. If a young couple has managed not to divorce in the first year of marriage, they can look forward to any number of anniversaries: chintz (1 year), wooden (5 years), straw (9 years), and so on right up to their golden anniversary. Birthdays in Russia are celebrated several times: at work with colleagues (nothing less than the best will offend them), at home with family and in a restaurant with friends.

In recent years the vast array of purely Russian holidays has been supplement by such foreign acquisitions as Halloween, St. Valentine’s Day and St. Patrick’s Day. True, these are celebrated mainly by the younger generation.

Many holidays which had political connotations initially have since become popular customs. Men’s Day and Women’s Day, for example. Men’s Day used to be known as Soviet Army Day. Today no one remembers that. It’s just a day when women wish their male acquaintances well, regardless of whether they were ever in the army or not. International Women’s Day was initiated in 1911 by Clara Zetkin, the German communist leader and fighter for women’s rights. Again, it’s the rare person who is aware of this today. March 8 in Russia has become a truly national holiday. In the early 1990s when efforts were made to do away with Russia’s communist past, some pointedly progressive women made a show of refusing men’s good wishes on March 8 because of Zetkin’s having been a communist. But soon their fervor faded. Especially since there’s nothing bad about defending women’s rights, no matter whose idea it was — a communist’s or an anti-communist’s.

Foreigners married to Russians quickly make their peace with the fact that March 8 is a special day in Russia. An Italian man I know told me that even before he was married a friend enlightened him on this score. Now he routinely gives flowers and presents on March 8 to his wife, her mother, and his closest female relatives here. What else can he do? God forbid he should offend them.

Certain traditional Russian holidays date back centuries, even to the pre-Christian era. Maslenitsa, for instance. Once upon a time it was a pagan holiday of the ancient Slavs in honor of the Sun god. The Russian Orthodox Church tried to stamp it out, to no avail. Even the years of communist rule could not eradicate it. Then it was officially known as the farewell to winter, which in essence it was.
For years the significance of this holiday was simply in the consumption — over an entire week — of a favorite Russian dish, blini (pancakes) with all sorts of fillings. Who could refuse such a delicious tradition? And what would be the point?

Now the question arises, why are Russians so fond of holidays? Perhaps it’s because we have a hard life and need to unwind on a regular basis. Or maybe it’s the harsh climate — four months of winter in some places, a full six in others. In such conditions people begin to invent amusements willy-nilly. But the most important thing about a Russian holiday is not the well-wishing and not even the present-giving. It’s the gathering of good friends around large tables laden with delicious food, where you can eat, drink and talk heart-to-heart late into the night. That’s what matters most. In which case there’s no sin in inventing another holiday.