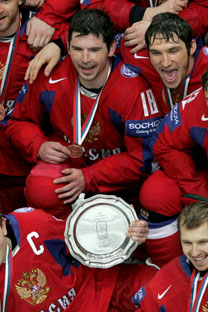 The Vancouver Olympics will certainly be the number one sports event for Russia in 2010. This time, however, even the most enthusiastic fans and usually optimistic sports officials are cautious in their forecasts, expecting “decent” performance from Russian athletes but understanding that concept differently. Sober minds expect 4-5 gold medals and a top five finish in the team competition, while more optimistic forecasters speak of a top three finish. The Soviet-era achievements, when Russian athletes excelled in winter sports, seem well forgotten.

With eyes on Sochi

For Russia, the Vancouver games are very special: Sochi is next in line, becoming in 2014 the first Russian city to host the Winter Olympics. Preparations are in full swing, including an examination of predecessors’ experience. Indeed, Russian experts visited Vancouver regularly, keeping an eye out for useful ideas.

Meanwhile, supporters are more concerned about performance by domestic athletes in Canada. Indeed, any country hosting the Olympics hopes for impressive results, preferably the first place in team competition. The example of China’s outright win in the 2008 Games is a challenge for many. Russian athletes will certainly have tough goals in Sochi, with the Vancouver contest seen as kind of preparatory trial, especially given that Russian champions are not among top favourites in certain winter sports.

Russia’s key hopes for the 2010 Olympics are focused on figure skating, biathlon, ski racing and hockey. Medals in other sports are desirable, but not a priority. In alpine skiing, for example, Russia won just once in the entire history of the Winter Olympic Games: in 1994 in Lillehammer, Svetlana Gladysheva won the silver in the women’s Super-G – even to her own surprise. Russian athletes are unlikely to lead in biathlon, ski jumping and short track. This division of winter sports into “priority” and “non-priority” sports has a long tradition and is easy to explain.

Russia’s first Olympic champion was Nikolai Panin-Kolomenkin, who won a gold medal in singles figure skating at the 1908 London Olympics. This was not pure luck, as figure skating was very popular in Russia at the time and it continued to gain momentum. Soviet figure skaters ruled the day, claiming top Olympic awards and enjoying enormous popularity at home. Things did not change even after the collapse of the Soviet Union. Thus, figure skating is one of Russia’s trump cards in Vancouver. Russian skaters earned three out of four gold medals at the 2006 Turin Olympics. Another feat like this can hardly be expected in Vancouver, due to many young skaters on the Russian team, yet the return of Evgeni Plyushchenko to the sport strengthens Russia’s chance of taking at least one gold medal. In all, Russian skaters hope to earn at least three medals, Valentin Piseyev, President of the Russian Figure Skating Federation, told the Rossiyskaya Gazeta newspaper.

Other strong points of the Russian team are biathlon and alpine skiing. In northern Russia, in the Urals and Siberia, skiing and hunting have always been an essential part of daily life, not mere entertainment. Therefore, there has never been any shortage of gifted boys and girls who can run and shoot. It was skiers and biathletes who earned the bulk of medals in the Soviet and post-Soviet times. Though the position of Russian biathletes – and especially skiers – has been damaged by a series of doping scandals, domestic athletes remain among the strongest and are unlikely to return empty-handed from Canada.

The men’s hockey event is eagerly anticipated by fans and experts, both in Russia and in Canada, the hosting country and the favored candidate to win. Yet, Russia is also among the top favourites. Alexander Ovechkin, Evgeni Malkin and Ilya Kovalchuk, who became international stars playing for North American clubs, are now keen to earn gold for Russia.

The last time Russia took the Olympic gold in hockey was in 1992 in Albertville. National coach Vyacheslav Bykov, who was team captain in 1992, seems to be the only one of today’s squad to remember the Albertville success. It is thanks to him that Russian hockey players began to restore Russian hockey to its former glory, which gave rise to the nickname “Red Machine” given to the victorious Soviet hockey squad. Russian won in two consecutive world championships, both times defeating Canada. All Russian fans dream of seeing another such game in Vancouver. The final round of the 2008 championship, when the Canadians were defeated in their native Quebec, is often broadcast on national holidays. Hockey is the most popular winter sport in Russia and for many, victory in this tournament will mean more than all other Olympic medals together.

As for the rest of the Olympic programme, Russian athletes may either win a brilliant victory or suffer a crushing defeat. The government spends a lot on sports, but the results are largely expected not now but in four years’ time in Sochi.

In the first place, it is speed skating, which is also very popular in Russia. Soviet speed skaters regularly won Olympic awards, but all this ended with the collapse of the Soviet Union. It turned out that there was not a single decent speed skating rink in the country and Russia’s leading athletes were forced to train abroad; moreover, even national speed skating championships were held abroad. Things have improved recently, with a number of speed skating rinks built over the past few years. In Turin, Russian speed skaters earned three medals – bronze, silver and gold. The Vancouver results could be less impressive, but the Russian team has great potential.

Sledding, bobsledding and skeleton are comparatively new to Russia. There were no serious hopes for medals until recently as these sports require costly equipment. However, the government’s generosity paid off quickly, with four Russian bobsledders lead by Aleksander Zubkob winning the silver in Turin, largely thanks to the expensive modern equipment sponsored by the government. This medal is said to have been the most expensive, but on the other hand it gave a powerful boost to the development of bobsledding in the country. Now, five Russian teams (three male and two female) will compete in Vancouver. They are unlikely to defeat the Germans, who are the main favourites, but Russian bobsledders feel confidence and support: when the team asked for new Austrian-made bobs a few months ago, $1.3 million was immediately allocated. The athletes are determined to do their best in Vancouver, like the rest of the Russian Olympic team which left for Canada.