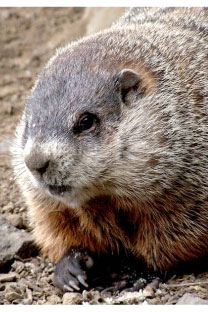 Residents of the Russian city of Nizhny Novgorod were trying to bribe Olesya the Groundhog with vegetables and nuts to induce her to make better weather predictions during a ceremony marking Groundhog Day at the city's zoo on Tuesday.
The Limpopo zoo decided to support the American tradition and see if spring would come early in Russia with the help of its own weather forecaster, Olesya the Groundhog.

The American tradition states that if on February 2, Phil the Groundhog leaves his burrow where he has been hibernating and sees his shadow, spring is still a long way away, namely six weeks.

"According to her forecasts, we should expect six more weeks of winter, because she did not want to leave her burrow," a zoo spokeswoman commented on Olesya's behavior.

She said last year Limpopo workers failed to get a weather forecast from the zoo's groundhogs as they were still hibernating on Groundhog's Day.