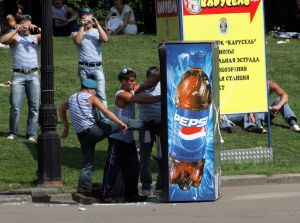 Throughout the last 50 years or so, numerous high level political summits between Russia (or the former Soviet Union) and the United States have seen one particular sticky black liquid share the stage with the politicians. The most famous occasion came when Richard Nixon met Nikita Khrushchev in 1959. The most recent was in July 2009, when US President Barack Obama arrived in Moscow with an entourage of businessmen.

he liquid isn't oil: It's cola. With their images closely associated with the US in the minds of many, Pepsi and Coca-Cola have seen their fortunes in Russia rise and fall alongside high-level political relations, but there are other elements that have prolonged the tussle.

Pepsi gained the upper hand after Nixon persuaded Khrushchev to sample a glass during their "kitchen debate" at the Moscow Trade Fair. Although forced to wait until 1973, the fizzy drink was the first Western consumer product to be produced and sold in the former Soviet Union and a brand every Russian has grown up with.

The current crisis has hurt Russia badly, but PepsiCo CEO Indra Nooyi said in July that the company was pushing ahead with its expansion and would invest over $1 billion in its Russian operation over the next three years – arming Obama with some good news ahead of his meeting with Russian President Dmitry Medvedev last summer.

Pepsi is upping the stakes in the battle with arch rival Coca-Cola for the 142 million souls in the Russian market. Coke only moved into Russia after the fall of the Iron Curtain in 1991, but has aggressively been giving Pepsi a run for its money ever since.

Coke has introduced eight new brands to the Russian market in the last couple of years and will also pump $1.2 billion into its infrastructure in the coming years. The pair has also been busy buying up domestic brands, particularly in the fruit juice segment, as they battle for market share among more traditional Russian soft drinks. In 2005, Coke bought the country’s second biggest juice maker, Multon. Pepsi returned the salvo in 2008, paying out $1.4 billion for top producer Lebedyansky.

This war is anything but specific to Russia. The cola kings rank amongst a host of FMCG companies (fast moving consumer goods) lunging desperately for growth in emerging markets around the globe. According to Euromonitor, Russia comes in second - just behind India - as offering the highest growth for soft drinks sales in to 2012. The top five also includes Vietnam, China and Ukraine.

Coke CEO Muhtar Kent has said he expects to see Russia enter the top five highest earning markets for his company (it is currently 12th), while Pepsi praises Russia as a “very attractive growth market.” In line with such declarations, the latest investment plans will take Pepsi’s total layout in Russia (in tandem with subsidiary The Pepsi Bottling Group) to $4 billion; Coke's investment (via its subsidiary Coca Cola Hellenic Bottling Company) will total around $3 billion. Other multinational FMCGs pressing onwards in recent months include the likes of Kraft Foods, which opened a new $50 million cookie plant, and Nestlé which has invested to expand its line of ice creams in Russia and may soon do the same with cereals.

It’s easy to see the attraction, especially as these companies are watching consumption patterns in developed markets stagnate, if not fall. Emerging markets, on the other hand, offer large populations with growing incomes and a low penetration of FMCG goods - a BMI report at the end of 2009 predicts Russian per capita food consumption will inflate 76 percent by 2014, and the soft drinks segment will grow 36.2 percent, to reach $6.5 billion, while Datamonitor anticipates that together, the BRIC markets will total over $62 billion. Some suggest that FMCG companies should see a warning on Russia’s demographics, which hint that the population could fall by 10 million to a total of 130 million in the next two or three decades, but Dale Clark, Retail and Consumer Practice Leader for PricewaterhouseCoopers in Russia says that the potential development of consumption patterns still make Russia quite a prize.

Hopes may be high then, but the cola giants have met numerous obstacles to their bid to turn Russians into dedicated consumers. The pair has battled against Russian resistance to cola – whether that be the result of a general disdain for carbonated drinks, increasing focus on health, or the recent renaissance of patriotism. Additionally, traditional fruit juices and kvas (a drink made by fermenting rye bread), have taken back market share in recent years. This development is what led to the acquisitions of domestic juice makers, and Coke’s investment in producing its own brand of kvas. While Datamonitor expects cola to achieve a compound annual growth rate of 5 percent from 2000 – 2013, juices are anticipated to grow by 9 percent, and the patriotic kvas by a stunning 28 percent. In 2009, cola managed to capture just 25 percent of the soft drink market total.

Beer has also given the pair a headache in Russia, with sales of the alcoholic beverage more than doubling those of cola in 2009. Russian excise laws have contributed to this, with beer classified – and taxed – in effect, as a soft drink.

That means a bottle of domestic beer can cost around half the price of a bottle of cola, which has no small impact on cola’s young target consumers. While regulations introduced on Jan. 1 this year increased the excise tax on beer and restricted its sale in strategic locations, the authorities have already had to back down on the latter move in Moscow. And with this situation in the capital, the chances of the law being enforced in the regions seems very slim.

International brand soft drinks, on the other hand, suggests Clark, may not be so easily available outside major cities. FMCG companies have to wait to some extent for the development of modern retail chains into the central and eastern regions of the country. Not only do modern retailers provide the bulk of sales for the likes of the cola companies, but their distribution and logistics networks will also prove vital in such regions. That said, Clark points out that modern retailers are also likely to provide competition in the near future, as they are now starting to sell their own private labels.

Just as much of a challenge as the distribution issue is the ability to build the right capacity to serve an emerging market like Russia – with FMCGs forced to invest in extremely expensive fixed assets in countries still to find political, legal and economic stability. For example, Coke is reported to run over 14 bottling plants and 60 distribution centers. Given the decline in discretionary spending during the crisis, it’s no surprise that both Coke and Pepsi have seen numerous delays in putting new infrastructure into operation over the past couple of years. PepsiCo, for instance, has postponed the commissioning of a 170 million snack food plant in the south of the country more than once.

However, although he agrees it’s a significant issue in terms of costs, Clark explains that over capacity is the norm for large FMCGs in emerging economies. “These companies have a long view and know that growth will absorb extra capacity. In fact excess capacity is crucial because building a facility takes a long time, and because they don’t have the option to outsource should they need to increase production. You see their operations in a very similar form in Africa, for instance.”