The Bolshoi Ballet Will Take Spartacus And Don Quixote To The U.S. 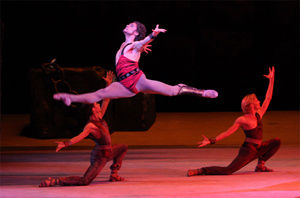 From February 16 to 28 the Bolshoi Ballet will be on tour in the United States. The Kennedy Center in Washington will see seven performances of Spartacus, while the Orange County Performing Arts Center in California will enjoy Don Quixote. Both productions are among the Bolshoi’s most renowned.
When it premiered in Soviet Moscow in 1968 Yuri Grigorovich’s Spartacus was a sensation. Not only was it a groundbreaking ballet, it was a literal bolt from the blue. One could hardly imagine a more powerful and dynamic male theme; the Bolshoi stage had never seen such an incandescence of passion and energetic dances. The heroic spirit of the struggle was overshadowed by the tender lyrical melody of love between Phyrgia and Spartacus, while the patrician women of Rome displayed an extraordinary sensitivity. Although in the Soviet Union the word “sex” had been replaced by the word “erotica”, it was now mentioned in whispers.

Before the Moscow premiere, the dancers were in a frenzy of anticipation: the reaction of the Soviet censors was impossible to predict. The ballet’s historical allusions reflected the conversations that went on in Soviet kitchens about freedom in life and ideas, while the ballet’s designers could easily be suspected of promoting cruelty and celebrating sensuality. These fears, fortunately, proved unfounded; Spartacus appealed to the leaders of the socialist state.

Spartacus sealed Yuri Grigorovich’s reputation as an innovator. His name became synonymous with the “golden age” of Soviet ballet then parading triumphantly around the world.

After two years away from the Bolshoi, the first thing Grigorovich did on his return was to revamp Spartacus. The new production is a bit different, more sentimental; the duets no longer seem overly frank. Some of the male leads seem to have been shorn of their former might. This, however, does not pertain to the phenomenal Ivan Vasiliev, whose seismic jumps leave even the most jaded spectators gaping. The tour’s intrigue is the young Ruben Muradian in the role of Spartacus. A soloist with a theater in Armenia, he was discovered at Grigorovich’s World’s Young Ballet competition in Sochi where his astonishing elasticity combined an earnest brutality with an eastern bliss.

The heroic Spartacans will have the Bolshoi’s best Phyrgias in their hands: Nina Kaptsova and two students of the late Ekaterina Maksimova (who originated the role): Anna Nikulina and Marianna Ryzhkina.

Don Quixote could be called the Bolshoi’s most Muscovian ballet — for its brash theatricality, its frank temperament, and its adventurous spirit.

Times, mores and morals change, but what does not change is the balletomane’s love of the sparkling Don Quixote, which has been in the Bolshoi’s repertoire for 150 consecutive years.

Kitri was one of Svetlana Zakharova’s first roles. She has the effect of a fireworks display, her perfect legs do nothing but dazzle. Natalia Osipova was born to play the part of the young Spanish girl with her gravity-defying jumps and tremulous lightness in air. On a Barcelona square with the innkeeper’s daughter, played by Maria Aleksandrova, she becomes a dizzying dervish. All three women are first class Kitris able to surprise with their exquisite technique, their minute variations and flawless execution of all thirty two fouetés.

Ivan Vasiliev first played the part of Basilio when he was 17 (he is now all of 20). His performance caused critics to call him a “wunderkind” and a second Vasiliev. Who doesn’t remember the sly pair of devil-may-care Spaniards played by Ekaterina Maksimova and Vladimir Vasiliev?

This ironic production, which has long since become a sort theatrical sleight of hand, is a merry Spanish caper that leaves no time for deep reflection. This ballet is pure froth and delight.