The Fight for Human Rights in Ukraine 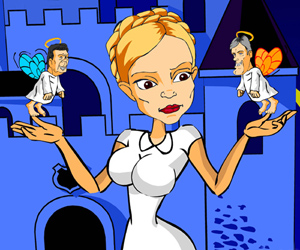 Following Ukraine’s independence and adoption of a constitution in 1996, the large Russian-speaking community, which had lived for centuries on Ukrainian land, believed it would be able to freely enjoy the use of its language in all spheres of public life. This feeling was strengthen in the early days of independence with the ratification of various international treaties on the protection of minority rights, including the European Charter for Regional or Minority Languages.

However, soon thereafter, the country’s leadership began a systematic assault on the use of the Russian language in a blatant disregard for democratic principles and international laws. The problem has only intensified after the election of Victor Yushchenko as president.

Examples of this assault include the restrictions on television and radio organizations broadcasting in Russian (which, incidentally, violates Article 10 of the Ukrainian constitution), the exclusive use of the Ukrainian language in advertising and medical instructions and the reduction of Russian-language schools from 4600 to 1500. Each year approximately 130 Ukrainian schools lose the right to teach in Russian. In many regions of the country, where the Russian-speaking population reaches millions, people lack proper educational facilities and are therefore deprived of their fundamental rights.

OSCE High Commissioner on National Minorities and former Norwegian Foreign Minister Knut Vollebaek recently stressed that the preservation and identification of a minority without language is impossible. He also underlined that a multi-ethnic society must ensure the right of minorities to develop their languages. It is on these principles that Canada and Belgium ultimately achieved inter-ethnic reconciliation. In South Africa, there are currently 11 official languages that coexist peacefully. Other world countries like U.S., Switzerland, Finland and Sweden, also operate on the same principles.

The Russian language is being displaced under the pretext of protecting and strengthening the state. This is a clear policy of ethnocide, not only against the Russian population, but also against citizens of other nationalities native to Ukraine. This policy will only lead to further fractures in Ukraine’s statehood.

Ukraine must prevent a nationalistic explosion that could destabilize the whole of Europe. It is on this ground that militant nationalism may find its growth and this will mean a dead end for the cultural and economic development of Ukraine in the future.

Vadym Kolesnichenko is a Deputy in Upper Rada of Ukraine’s parliament.