Bureaucrats have it made 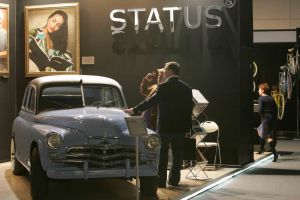 On Jan. 20, St. Petersburg mayor Valentina Matviyenko told top officials of the municipal police authority to reign in their appetites and stop wasting taxpayer money on fancy foreign cars procured for administrative use. Will they care to listen? Russian bureaucrats have become accustomed to driving expensive cars, living in palatial villas and ordering outrageously extravagant luxury products through the government procurement Web site.

Speaking at the annual review session of the St. Petersburg Central Internal Affairs Directorate, Matviyenko demanded that in 2010 the police should buy Russian cars instead of expensive foreign models.

“One of the district departments recently submitted a procurement order for vehicles that cost as much as a Mercedes 500. Such waste is unacceptable during a crisis,” she said. The call for moderation is well in order, but sounds rather lonely in the bureaucratic wilderness. In most of Russia’s regions, government officials and whole departments place government orders, unabashed and undaunted, for expensive cars, designer furniture, luxury products and even gold and silver gifts for their colleagues.

Yelena Panfilova, Director of Transparency International Russia, an anti-corruption think-tank, said in an interview to Novye Izvestiya that currently they use two approaches. The first “brazen” approach is to “make scandalously unwarranted purchases” through the procurement Web site. “But if journalists or the general public find out, such orders usually disappear,” said Panfilova. She recalled a recent story from Kaliningrad, the Russian enclave on the Baltic Sea: “The local public servants tendered a contract for some upscale car for the police department without any explanation why any law enforcement agency could possibly need such an expensive vehicle. As soon the order made headlines in the press, the order was removed from the Web site.” She notes that bureaucrats in various government offices with a taste for excess have become increasingly sophisticated and are very resourceful in coming up with a pretext to make an extravagant purchase for personal use.

Vadim Solovyev, a member of the Russian State Duma, is sure that the much discussed “efficient spending policies in Russia are no more than a bureaucratic lip-service.”

“In the regions, government people scoop up public funds with an unstinting hand – buying cars and gifts, building villas, you name it,” said Solovyev. The Duma deputy cites the example of Tver, a city northwest of Moscow, where a huge mansion sits just outside the city limits.

“I made inquiries and found out that the building houses the regional pension fund. The interior design makes even the State Duma pale by comparison. Of course, people see this,” said Solovyev.

The spending habits of the pension fund managers attracted very sharp criticism from State Duma Speaker Boris Gryzlov, who was shocked to see public officials spend “excessive” sums of public money “to build palaces and castles where pensioners go and see it all.”

The Chairman of the National Anti-Corruption Committee, Kirill Kabanov, offers a simple explanation: Russian bureaucrats have come to regard themselves as successful businessmen. “They believe they can't do without such attributes of power as a limo and a mahogany-paneled office.”

The problem is they buy these luxuries with public funds. What is worse, they get away with it because existing laws do not penalize inefficient public spending unless it is outright embezzlement. “Today it is no offense for a government pencil-pusher to order an armchair for his office at a price equivalent to the annual pension payments for a thousand retirees,” said Kabanov.

He thinks that many bureaucrats even behave like self-appointed local presidents. “One federal official told me in a private conversation that he had seen the office of the Russian President and decided to replicate the design in his own quarters,” said Kabanov. He is confident that public officials try to put up a dazzling setting because they understand that “when visitors see a shabby room with an outdated PC and old furniture, they won't offer a bribe bigger than a $100 to its occupant. But when they find themselves in a spacious, richly appointed office they tend to think that it would be pointless to mention anything short of $100,000,” said Kabanov, explaining the bureaucratic mindset.

Solovyev from the State Duma believes it is critical to “introduce tighter budgetary controls and liability for inefficient public spending.” “But since the majority in the parliament belongs to United Russia and most Russian officials are United Russia members, one can't really hope to get such bills through,” he said. Incidentally, a similar initiative to establish legal punishment for inefficient spending of public funds was proposed in October 2009 by Alexander Anikin, Head of the Department for Enforcement of Anti-Corruption Legislation at the Federal Prosecutor’s Office. But no bill has been, as yet, drafted to this effect. Perhaps the lawmakers themselves do not bother to spare taxpayer money on their personal comforts.

This year for example, they want to take nearly $100,000 out of the state budget for maintenance of lifts in the Federation Council building, which accommodates the upper chamber of the Russian Parliament, and for waste collection. The offices of the State Duma also absorb millions in public money allocated for repairing heavy doors “with hardwood features” or replacing “exclusive office furniture.” Last year, the State Duma spent about $30,000 on red carpet runners alone and bought around $70,000 worth of cut-glass pendants for the chandeliers. Another $3 million will be earmarked this year for repairs on the State Duma buildings.

In the regions, local lawmakers are getting exorbitant gifts procured at the pubic expense. For example, last summer the government of the Magadan Region in the Russian Far East announced an open tender for producing 40 figurines at a total cost of $25,500 to celebrate the 15th anniversary of the Magadan parliament. According to the terms of reference, each figurine shall feature “a fisherman and a prospector standing by the emblem of the Magadan Region” cast in .925 or finer silver.

“We must impose restrictions on such procurement, but how do we put it in legal language? We cannot give a full list of ministries and departments with a detailed specification as to what items and at what price they are authorized to purchase,” said Victor Ilyukhin, a member of the State Duma. He is confident that Russian government can supervise the procurement process by prescribing a list of necessary supplies and “specifying items that are deemed as excessive.”

“Yet there is a more straightforward approach: If the governor of the Samara Region, for example, spends several million dollars to buy a bullet-proof Mercedes, he should be immediately sacked. Then no minister or governor will dare to do anything like this,” said Ilyukhin.

At the end of 2009, the Samara administration did indeed buy an exclusive, bullet-proof Mercedes-Benz S600L for around $746,000 for regional head Vladimir Artyakov. Another $23,000 was paid as the insurance premium for 2010. Later, the governor explained that when the order was placed, “the situation in the region was dangerous and I needed a safe car.” But Artyakov did not bother to explain why he uses the car in Moscow. Recently, it has become known that another Mercedes also used by Samara officials has been insured for $5,500 in public funds against volcano eruptions, tsunamis, landslides and falling rocks.

According to Kirill Kabanov, Russians view it as “normal that officials drive around in such fancy cars.” “Nothing will change unless people realize that public money, which the bureaucrats spend to buy a couple of armchairs for their offices, could be spent to provide better healthcare services to them and their families, or to renovate a hospital or repair a road in their neighbourhood.”

He is confident that as soon as society raises its voice, government procurers will quickly switch to IKEA furniture.

Yelena Panfilova believes that public spending should be monitored by "public boards" mandated to scrutinize government orders before they are published on the procurement Web site.

“Let them keep track of who wants to buy what. I think this would keep the imagination of our government officers under restraint as they would be aware that they cannot buy gem-studded kebab skewers at $300 apiece, like they recently did in St. Petersburg,” said Panfilova.