The secret life of Moscow's metro 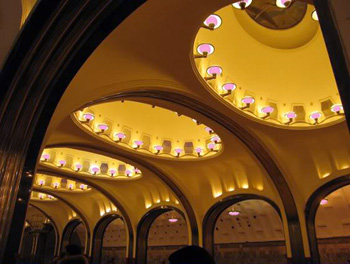 Magnificent chandeliers, great halls, statues and decorations – the Moscow Metro is definitely more than just functional. Every day crowds of people push through the labyrinth of great architecture, taking it already for granted. Few people still take a closer look — just photographers, tourists and me. I have already been living several months in Moscow, but still find it fascinating that public transport can be so beautiful. Practically every central metro station has its own design, and many remind me of great ballrooms.

Muscovites spend a lot of time riding the metro every day –- and so do I. Considering the enormous traffic jams all over Moscow it’s really faster to get around the city. In rush hours, I’d rather change metro lines twice than stand totally still in traffic. A ticket good for 20 rides costs about $15 dollars. The Moscow metro has a wide range of passengers: Old and young, bums in smelly clothes and Chanel-carrying, fur-coated beauties all meet in Moscow’s metro, standing side by side in the crowded cars. People kill the time by listening to Ipods, reading books and E-books, enjoying an after-work beer, flirting or even taking a nap. After a while I became used to passengers' heads slightly falling on my shoulder when they doze off next to me or to the click-swish of an opening beer can.

In the passages between stations, an economy of its own is flourishing. You can buy all sorts of things — tickets to shows, passport cases, laminated metro maps, toys, socks, flowers, scarves, kittens, rabbits and whatever else people find worth selling. Some ambitious sellers make it even onto the trains, usually between stations more outside the center. They offer practical but sometimes also quite weird things like metal head massage instruments. Desperately they try to drown the noise during a ride with loud voices offering their products. I have to admit I am not used to buying stuff from a lady in the metro car, but occasionally some locals do. What you can't get underground, you can buy outside — from elderly ladies who mostly sell what they grow at their country houses. Next to pickled cucumbers and mushrooms, you find seasonal berries, nuts, flowers but also handmade socks, slippers and clothes. I personally appreciate this service –- the ability to pick up some fresh, delicious berries or cucumbers on my way home without any detour to a market.

Entering a metro station without paying is tough in Moscow. If you enter without a ticket, the sound of an alarming melody will draw attention to your mischief. Now and then, sportive guys mooch a free ride — jumping quickly over the light sensors at the gates and disappearing in the crowd, followed by angry whistling of the guards. Metro personnel and police try to maintain order, especially in the chaos of rush hours. The times of scary metro police are over. Many of them are quite young and seem to be more of a human accessory matching Moscow's metro, giving it a special flavor. So are the ladies behind the ticket counters. There are no machines yet doing the job and maybe especially this personal and social contact give the metro its charm.