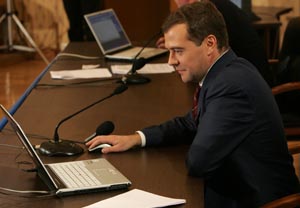 So far, the project remains an online reference about services provided by various government departments. Before long, however, this website will become instrumental in obtaining various certificates and documents (including an international passport), avoiding long lines and red tape

As Russian bloggers joke, a more fitting name for the new website designed to solve the problem of bureaucratic red tape would be “Bureaucracy.Net”: in Russian, “net” means “no”. According to Communications Minister Igor Shchegolev, the idea is to save time and effort for those who apply for services. “Roughly, there are at least 360 million applications for state services annually. The introduction of this portal will reduce the number of applications by at least one fifth. And it is not just about saving payroll costs for officials. This will also save time for Russian citizens, and save transport costs, leaves from work, and even sick leaves as queuing can be very stressful. Our portal will give people more free time and positive emotions. It will truly be a people’s site,” the minister is convinced.

Even pensioners use the new site, Shchegolev says: “The electronic portal arouses great interest among elderly people who can go online with the help of their more advanced grandchildren or by taking a special course.” His ministry, he added, is going to introduce electronic services in a consistent and diversified way. “There are pilot zones, so-called infomats, through which people without computers also can get relevant information, and in future, services,” Shchegolev said.

Soon, he hopes, electronic government services will also become accessible from mobile phones and digital television. “We have the necessary technology, we will now see how to introduce it,” he added.

Yet, the e-government concept means more than online services. In fact, there will be a single electronic space, where different departments will cooperate with each other. So far, different ministries and departments have unequal online representation. Some of them have already switched to electronic workflow, but outside such advanced departments, documents exist only in printed form. “This inequality has to be eliminated in the shortest possible time,” Shchegolev stressed. “Currently, we are focusing on the integration of federal and regional levels, also building horizontal ties between regions and their databases in order to make it all work as a single big machine,” he said, expressing hope that the speed of the electronic workflow would be rising.
Rostelecom was appointed operator of the e-government project. The company faces a number of tasks, including ensuring information security, electronic digital signature, and methodological assistance to civil servants on related issues, according to General Director Anton Kolpakov.

In his state-of-the-nation address to parliament in November 2009, Russian
President Dmitry Medvedev defined the development of strategic and information technology as one of the government’s priority areas. An important aspect in this respect is to make government services accessible electronically, in other words, to create a full-scale electronic government.