The Varangians Are Here To Stay 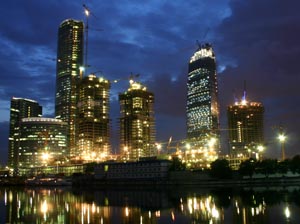 Crisis and the Russian tradition

Ten years ago, after Russia’s default in 1998, many firms rushed to replace their expat employees, whom they could no longer afford, with Russians. In the current crisis, contrary to expectations, the situation is entirely different. The overall number of expats in Russian business has dropped only where jobs have been cut. The changes now are of a different nature. Employers are ready to pay, but not to overpay. Consequently, they have gradually begun to favor managers with broad backgrounds and to replace older and more experienced employees with younger but promising ones.

Russia has always needed foreign specialists: Russia has traditionally lagged behind developed countries in the West in most departments. The crisis did nothing to change that: so long as business is alive and developing, experts in new technologies will continue to be needed in Russia.

“One of our clients is in serious contention to become Russia’s top producer of meat products,” said Mikhail Bogdanov, president of Konsort consulting group. “Where do they make the best sausage and frankfurters? In Germany, Austria, Switzerland, Italy… That’s why our client is ready to offer a highly attractive compensatory package to specialists from these countries who could organize production at companies in Russia.”

In a poll conducted by HeadHunter at the site hh.ru in June 2009, of the 137 large and medium-sized firms that responded, 22% had expats on staff while another 6% were planning to hire expats in the near future. Only 7% of these companies said they would not hire expats. As for branches of foreign concerns in Russia, for all that they would like to spend less on expensive foreigners, it isn’t always possible. People well versed in corporate rules and principles are indispensable in top and even middle management. “Moreover, there are eastern companies whose corporate culture far from all Russians are able to fit into. Therefore they hang on to ‘their own’,” said Sergei Salikov, director of the Moscow-based recruitment agency Ankor. “For example, the Japanese and the Koreans have a different business model. It is not their practice to remove top managers. Before being given a top position at a company, a person must work for many years there to prove his loyalty. Given this, it is unlikely that they would replace expats with Russian managers.”

They no longer pay for an accent

Employers have stopped throwing money around and paying high salaries to anyone “of foreign origin”. In many companies, they have simply replaced those expats who were being overpaid with “optimal” ones. “The first to go were the ‘grand pooh-bahs’ who had been invited to join the board of directors solely for sake of the company’s image,” said Natalia Kurkchi, a partner at the recruiting agency Antal Russia.

Meanwhile, many specialists who lost their jobs in Europe because of the crisis are now willing to come to Russia under different terms. “Since the beginning of 2009 there has been a tendency to replace ‘expensive’ expats with ones who are less highly paid, but no less experienced,” says Mikhail Bogdanov. “One of our client companies recently replaced its director of logistics. The new director is paid roughly half as much as the old one.”

Experts say that there has been no wholesale replacement of expats with Russians. Foreign specialists have suffered as much as their Russian colleagues, depending on their particular profession and personal qualifications. Indeed, in many spheres, the salaries of foreigners are still 30% to 50% higher than those of the local hires. This situation is a matter of expedience — and the higher qualifications of expats. It’s worth noting that at the top levels of management in recent years the salaries of Russians and foreigners have been almost the same. And occasionally the Russians have been paid more.

Since the crisis, of course, requirements for specialists in Russia have changed. For instance, fewer specialists are needed in the banking and financial sectors. But then the demand for foreign managers in retail and development is as high as ever.

The closest from BRIC

Even today Russia attracts foreigners because of the opportunities for career growth. “A top manager who came to us from abroad received not only a significantly larger compensation package than he could have expected in the West, but whole new opportunities,” said Anton Derlyatka, managing partner of Ward Howell (consulting). “In Russia he will be allowed to manage a billion-dollar business far sooner than he would, say, in Great Britain.”

“Compared to Germany, in Russia I have greater opportunities to realize my potential,” said Michael Germershausen, managing director of Antal Russia. “There I would be an ordinary recruiter like thousands of others, whereas here I am probably the only German who speaks fluent Russian and understands the mentality of both sides, who has seven years’ experience recruiting personnel in Russia. Thanks to this I managed to create a highly profitable business finding candidates for German companies in Russia.”

Though the crisis has made for certain correctives, it has not arrested the global search for business focused on Brazil, Russia, India, China (BRIC) and other developing markets. To make a career in major international concerns, one is often required to have work experience in these growing markets. In this sense, Russia is preferable to China or Brazil because of its proximity to Europe. Work in Russia is often a ticket to the best international companies. Around the world demand is growing for specialists who not only know Russia and the language but understand the mentality of Russian partners. Natalia Kurkchi reports that recently Antal’s Singapore office received a request from a major bank for clerks who speak Russian. The bank needed Russian speakers to deal with its VIP clients from Russia. “Strangely enough, there were many more Russia experts during the Cold War than there are now when our countries no longer oppose each other,” said William Branch, who works in the Russian branch of an international consulting firm. “Today the demand for them is again increasing. When my contract runs out I plan to return to the States where I hope to find work either in the State Department or in a large corporation — as a Russia expert.”