Dagestan gets a new president 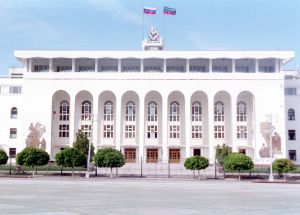 The campaign to nominate the next president of Dagestan, which came to a close on Feb. 10, differed significantly from similar nomination campaigns in other Russian regions, including others in the North Caucasus. Never before has it taken so long for the Kremlin to make its choice. The short list of five candidates for the presidential post was first announced by the General Council of the United Russia party on Nov. 19, and was approved by Russian president Dmitry Medvedev on Dec. 16. He was expected to announce his choice by Jan 21, but Medvedev remained silent. On Feb. 8, Medvedev finally announced his decision to the People’s Assembly of Dagestan, nominating Magomedsalam Magomedov to be the republic’s next leader. Two days later, the parliament approved the nomination in a unanimous vote.

In addition to the unexpected delays, the Kremlin also sent such mixed signals to the regional political community during the nominating campaign. On one hand, Dagestan’s incumbent president, Mukhu Aliyev, was received by top Russian officials, which is always seen as a sign of Kremlin’s backing. He also regularly appeared in Moscow’s newspapers, explaining his opinions on the situation in Dagestan and prospects for overcoming existing problems. At the same time, the Dagestan authorities were criticized – though softly – for scandals surrounding gubernatorial elections in Derbent, the republic’s second largest city.

Never before has a single campaign to determine a regional leader raised so many questions regarding the adequacy of the appointment system. These anomalies are, like many things, the result of the unique characteristics of Dagestan, which distinguish it from its Caucasian neighbors Chechnya and Ingushetia. Dagestan’s sociopolitical space is much more fragmented and diverse. While it could not be called a democracy in the western sense, it has true freedom of speech. This pluralism is easy to explain: The political and socioeconomic consensus in Dagestan is the result of complex combinations and configurations of various clans and elites – not just in ethnic terms, but also in terms of bureaucracy and religion. It is no wonder then that many heavyweights in Dagestan have interests beyond the republic’s borders, including close ties to the Kremlin, the government and the presidential administration in Moscow. This explains the protracted nomination campaign: With so many parties involved in behind-the-scenes negotiations, it is hard to find a universal solution that would suit all.

Whatever the reasoning, Magomedsalam Magomedov won the position. It would be incorrect to see him as a new leader of Dagestan in full measure. On the one hand, Magomedov, 46, is a young politician whose career was built after the collapse of the Soviet Union. He is from the same generation of Russian politicians as Alexander Khloponin and Dmitry Medvedev. On the other hand, he has enough experience — he chaired the People’s Assembly from February 2006- April 2007 and has worked in various government commissions.. Yet, his strongest advantage is his family ties: He is the son of Magomedali Magomedov, one of Dagestan’s most influential politicians, dubbed “the Grandfather.” He has vast experience and significant influence, which his son will certainly require. From 1994-2006, Grandfather headed the State Council of Dagestan, and he was the soul and engine of this “collective presidency.” Judging by the younger Magomedov’s latest statements, he will abide by the old tradition: Whatever the title of the republic’s leader, he cannot be a dictator; he must look for compromises, resorting to tough methods if necessary, with various influential groups. Indeed, Magomedov, who is an ethnic Dargin, is prepared to have head of government who is an Avar, the region’s largest ethnic group).

The Dagestan nomination has one more aspect worth mentioning. In choosing Magomedsalam Magomedov, the Kremlin signals that it wants no dramatic changes in the republic. On the one hand, the incumbent leader was made responsible for the current state of affairs in Dagestan, in an unobtrusive and quiet manner: He was replaced, so that replacement means his governance skills were not flawless. On the other hand, the chosen figure is an “external manager” who made his career elsewhere, but still maintains solid connections and influential relatives within the republic. This is all fine, but in no way does this choice indicate that Kremlin officials have a better understanding of Dagestan’s problems or that they are taking them seriously. They may be, but so far, many questions remain unanswered.

Sergei Markedonov is a political analyst specializing in the Caucasus.