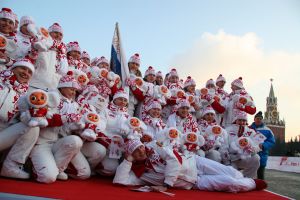 Rejuvenated patriotism, joined by the success of Sochi’s bid to host the 2014 games, is fueling a Russian lust for victory in the 2010 Winter Olympics in Vancouver. With the authorities leading the cheers (and picking up the tab) the Russian team heads to Canada under the weight of great expectations.

Russia’s Olympic rivals watched with trepidation as the Russian figure skating team topped the medals table at the European championships in January. Russian success in the European competition has been limited since 2005, after which they swept the podium at the 2006 Olympics in Turin. January’s win seems like an ominous omen for their challengers in Vancouver.

That said, aside from the recently resurgent hockey team, in other disciplines the team may struggle to recapture the glory of the Soviet era. The official line is that Russia hopes to win as many as 40 medals, including up to 12 golds. Such a haul would almost definitely capture the top spot in the overall medals table. But such goals look highly ambitious, despite the authorities’ enthusiasm to replace the faded infrastructure of Soviet times. In the past two years, over $60 million has flowed from the federal budget to the various sports federations, and athletes have received grants of up to $1,500 per month. Results in the 2008-09 season were been disappointing, however, and the tantalizing cash prizes the government is offering to Russian competitors – $135,000 for a gold medal, $81,000 for a silver and $54,000 for a bronze along with a car for every podium place – look out of reach for many.

Gennady Fyodorov, Reuters’ sports correspondent in Moscow, doubts that the prospect of the Sochi games has pushed this increased investment to any great extent. “Sport is seen as one of the most important vehicles to promote Russia,” he said.

In contrast to the official forecasts, it is more likely that the authorities will have to settle for a handful of golds and a place in the top five of the final team rankings. That, however, will still surpass the expectations of a Russian public less-than-convinced that the current crop of athletes will produce many world champions. A VTsIOM opinion poll in January revealed that fewer than 50 percent of respondents believed that Russian athletes would win gold in any discipline.

Not surprisingly, figure skating is seen as far and away the best hope, with 48 percent of people anticipating victory. The return of Yevgeny Plushenko, who retired after winning gold at the Turin games, is a huge boost. His triumph at the European championships last month indicates that he has a good chance to become only the third man to retain the Olympic figure skating title. Also on the rink, pairs European champions Yuko Kavaguti and Alexander Smirnov will be in contention, while Oksana Domnina and Maxim Shabalin will hope that their controversial “aboriginal” routine will please the ice dance judges more than it has ethnic groups.

Only 21 percent of poll respondents believed the Russian ice hockey team will make it to the top of the podium despite the talents of Alexander Oveckhin and Ilya Kovalchuk. Russia is likely to face the host team, Canada, in the final. Although the Canadians will have the important home court advantage, the Russians are hoping to capitalize on some psychological advantages of their own. After several years in the wilderness, the Russian team pushed its way past the Canadians in the past two world championships. Additionally, just ahead of the Vancouver showdown, the International Ice Hockey Federation revealed that the Russian national team now heads the global rankings. Many, including Russian defenseman Andrei Markov, believe that an attacking strategy will be key for a team clearly a little weak at the back.

"We have the best offense in the world,” said Markov, “and we have speed. We just have to play our game.”

In contrast to the confidence skating around the hockey rink, Russian hopes in biathlon and cross-country skiing have taken a battering recently, with eight athletes banned for failing doping tests since the end of the 2009 World Cup season. The loss of athletes who between them have won 10 Olympic medals, as well as three former or current world champions, leaves Russia depending on weaker competitors.

Yet more alarming perhaps are the suspicious glances being cast at the Russians who have made it to Canada. At a recent press conference given by IOC head Jacques Rogge, the subject of doping was raised repeatedly, with Rogge responding that he had been “puzzled by the numbers [of Russian athletes failing doping tests]” and suggesting that “[i]t's absolutely legitimate to be worried.”

Given such image issues, it’s no surprise that Russian President Dmitry Medvedev has demanded urgent action to clean up athletes over the last year. Reuters’ Fyodorov points out that Russian athletes are hardly the first in history to fall foul of doping regulations, but also notes that the buck now looks like its being passed. Russian authorities stated vociferously that all athletes immediately prior to their departure to Vancouver had tested clean; any failed tests at the games then will presumably be sole responsibility of the individual athletes or team doctors.

Meanwhile, now in Canada, Russian competitors in non-traditional sports are starting to sense that they may have a chance to climb aboard the podium. The performance of the country’s female snowboarders in the 2009 season, for example, suggests they could add to the medal haul. However, for now, the evolution of Russia’s new generation of top talent is at an early stage. While cash may be pouring in to help expand the roster of competitiveness, Fyodorov said: “They just haven’t had the time to develop world class athletes in [these types of] sports.”

“For instance, in ski-jumping,” he said, “we have seen heavy investment – including hiring top class German coach Wolfgang Steiert – but although there has been improvement, it’s not to the level of winning Olympic medals. The target really is for four years time in Sochi.”