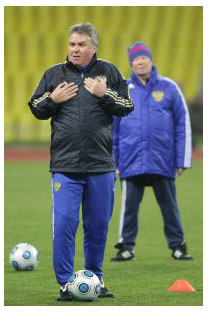 The biggest football clubs in Europe want him, international federations are fighting over him, yet Russia has fallen out of love with Guus Hiddink. Replacing him as the coach of Russia’s national team could prove tricky, but it could be the best move in the long run.

By all accounts, Hiddink took his bosses at the Russian Football Union (RFU) by surprise on Saturday. The Dutchman slipped the announcement that he is planning to leave his post as head coach of the national team into his weekly column for a newspaper in his home country almost as if it were an afterthought. While it’s no great surprise that he won’t be signing a new contract when his current agreement finishes in June, the timing – less than a week after the draw for the Euro 2012 qualifiers – could have been better. This situation leaves the RFU with a tight window in which to find a new man who can not only step up to the challenge to replace the Dutchman’s skills and international experience, but lead Russian football’s development in the longer term.

The writing on the wall for Hiddink, who had led the Russian team since 2006, was clearly discernable as soon as Sergei Fursenko took over as president of the RFU on Feb. 3. However, the original traces emerged as early as November, when Russia slumped out of a playoff game against Slovenia and lost the chance to compete in the 2010 World Cup. Ever since, Hiddink has faced mounting criticism – a big change from a year or so ago when he took a team that had underperformed for over a decade within one step of the Euro 2008 finals.

There are legitimate fears now that the Russian team could struggle to keep up the progress it has made under the Dutchman. In January 2006, Russia was skulking at 34 in the FIFA world rankings; today, it sits at 13th. However, given the logic of the main complaint against Hiddink, his departure may be the best thing in the end. Perhaps he was merely the midwife for the rebirth of Russian football, but a different - and Russian - parent would better nurture its future growth.

The major grievance against Hiddink since the end of the World Cup bid is that the coach doesn’t spend enough time in Russia, and consequently favored out-of-form established players over emerging talent from across the country. The inclusion of Roman Pavlyuchenko in the squad for the playoffs – who could hardly get on the pitch for his regular team, Tottenham Hotspur – at the expense of Alexander Bukharov, who at the time had scored 16 times for Russian domestic league leaders Rubin Kazan, is perhaps the best known example mentioned by Hiddink’s detractors.

Even the man that originally hired Hiddink was heard declaring three days before the resignation that a Russian manager should be recruited. Sports Minister Vitaly Mutko told media: "I am in favor of Russian-born coaches, people who understand our way of thinking.”

"We should develop from within,” continued Mutko. “To develop a coach … means leaving a legacy. A foreign trainer is only interested in the national team and will not share his experience with the whole country." Hiddink found spreading the message especially tough; he learned little of the Russian language in his three years in the post.

Therefore, while Russian football has much to thank Guus Hiddink for, the optimism he helped develop in the country’s game now needs to be cultivated, and Russia needs to start producing more world class players. If Fursenko’s bold prediction that Russia will win the World Cup by 2018 is to come true, a national manager that can inspire and guide the development of young talent across the country is necessary.

The problem of course is that this prompts a search for the proverbial needle in a haystack. Coaches that can juggle success in the short term while working on a longer term strategy are rare enough throughout the globe, let alone in Russia, which has spent much of the last two decades or so distant from the European club competitions that offer the experience of playing against the best in the world. During Hiddink’s time that changed; Russian clubs captured a pair of UEFA cups and made regular appearances in the Champions League. The new national coach will need to help maintain such success at club level to feed his team with players.

Even without the official favor for a home-grown coach, an overseas recruit still seems unlikely. Many of the top Russian sides have spent the last few years trying to emulate the Hiddink magic by hiring from abroad, with little to show for it. Besides, there are few, if any, available candidates with an appropriately stellar reputation to fill the Dutchman’s boots. That said, Gennady Fyodorov, the sports correspondent for Reuters in Moscow, suggests that Dick Advocaat may be an exception. The current head coach of the Belgian national team worked with Fursenko at Zenit St Petersburg, winning a Russian league title and the UEFA cup.

However, the pool of appropriate Russian candidates is very shallow. Many of the old guard have already failed in the international post, which is what prompted Hiddink’s appointment. Dynamo Kiev coach Valery Gazzayev is thought to be a front runner, but he has already tried, and failed.

Among younger coaches, the one seemingly obvious candidate comes with his own particular baggage. Kurban Berdyev has led the unfashionable Rubin Kazan to the last two domestic titles, and came within one game of qualifying for the knock out stages of the Champions League in 2009. However, he is an ethnic Turkmen, known to regularly thank Allah for victories and never appears at a press conference without clasping his prayer beads. Quite where this positions him in today’s Russia is an open question. Looking further afield, Leonid Slutsky’s arrival at the top of the Russian game as head coach at CSKA is probably too recent, and although Hiddink’s current assistant Alexander Borodyuk is also likely to be mentioned, he has little experience as a head coach.

Whoever is handed the task, his first proper test will arrive in September, when qualification for the 2012 European championships begins. The draw was kind to Russia, with only a hungry and improving Slovak side and an organized Republic of Ireland likely to offer much resistance. However, the new man will need to get up to speed quickly if he’s to get the chance to lay the groundwork for that targeted World Cup victory in 2018. In the end, Hiddink was finished by the raised expectation he created, and that still hasn’t gone away.