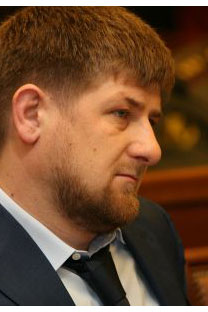 "Chechen traditions do not allow you to argue with elderly people," Kadyrova was quoted as saying on the Chechen president's official website on Tuesday. "Chechens have always made concessions to those who are older than them, even when those people are not objective in everything. That is why I ask that the court cases against [Memorial chairman Oleg] Orlov and [Moscow Helsinki Group head Lyudmila] Alexeyeva be dropped."

Kadyrov filed the lawsuits in the wake of the murder of Chechen human rights activist Natalya Estemirova last summer, when Orlov, 56, and later Alexeyeva, 82, blamed Kadyrov for Estemirova's death. The Chechen leader, who has been accused of rights abuses but has also been credited with restoring the infrastructure of the war-torn republic, vowed to get his revenge in court.

Kadyrov's decision came a week before a Moscow court was scheduled to hear a defamation lawsuit against opposition newspaper Novaya Gazeta, whose journalists frequently publish exposes on corruption and rights abuses in Chechnya. Five people connected with the newspaper, including award-winning journalist Anna Politkovskaya, have been murdered since 2000.

Kadyrov's mother was among several public figures, including members of the Public Chamber such as Anatoly Kucherena and journalists Maxim Shevchenko and Vladimir Mamontov, who have asked Kadyrov to drop the cases.

"The authors of the letter do not doubt Kadyrov's right to file these claims, nor the basis in filing these claims," said Kadyrov's spokesman Alvi Karimov in a statement, adding: "Previous trials have already proven the Chechen president's case in court."

Orlov said Kadyrov may have been prompted by officials in the Kremlin to drop the cases, and added that he had been expecting the news.

"Investigators were just about to make a decision regarding the case against me: Either they would charge me and the case would go to court, or not," he told The Moscow News. "But I would have won. Recently, talking to the investigator, it became clear that they were getting ready to close the case because they had no lawful evidence against me."

Orlov added: "I knew - though I cannot reveal my sources - that the decision to close the cases against me and Novaya Gazeta had already been made. Apparently, Kadyrov found out about this decision as well."

Last month's appointment of Alexander Khloponin as deputy prime minister and presidential envoy to the newly-created North Caucasus Federal District highlighted the government's concern with the human rights situation there.

"We need to understand where the money is going and how efficiently it's being spent," said President Dmitry Medvedev after the appointment of Khloponin, who also reports directly to Prime Minister Vladimir Putin. "That's why an economic manager in needed here, not a strongman."

Caucasus analyst Sergei Markedonov said he believed Kadyrov really had been persuaded by his mother to drop the lawsuits.

"If the Kremlin made the decision, then we can say it is in control of the situation," said Markedonov, an associate professor of history at the Russian State University for the Humanities. "But that is too optimistic - I seriously doubt that was the case. Most likely, it was Kadyrov acting pragmatically."