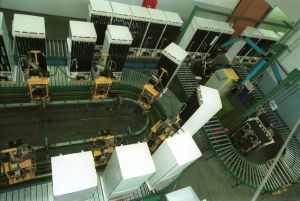 Russia needs to attract a few of the best foreigners rather than lure Russian expats home if it is going to create its own "Silicon Valley," a senior Kremlin official told Vedomosti newspaper.

Vladislav Surkov, first deputy head of the presidential administration, said in an interview published in the business daily on Monday that there was a lot of "beautiful but unwise" talk about reversing Russia's brain drain.

"We must bring the best here, and whether they are ours or not is a small matter. If we attract a few landmark names, known in their professional field, this will open doors to us, show that it is possible and necessary to be here," said the official, who chairs a working group to develop a Russian "Silicon Valley."

"We need a new 'German settlement,'" Surkov said, referring to an area of Moscow in Peter the Great's time that provided the spark for much of the tsar's reforms.

The official said the government would likely choose a site near Moscow to create its hoped-for hothouse of technological innovation, but suggested that somewhere further afield, such as Vladivostok, was also an option,

"We are discussing different regions. Many believe that it is necessary to build it somewhere near Moscow. It still has the highest scientific-technical and financial potential. But there are other interesting options - Vladivostok, for example," he said.

Surkov went on to lay out the conditions necessary to create a Silicon Valley in Russia, stressing that it was up to the state to provide an environment in which innovative private companies could flourish.

"Of course, the miracle-workers would be among the officials and businessmen there, but together we must create the circumstances in which a miracle is possible," he said.

To do that, he said it was necessary to have boldness, faith and determination, as well as the demand for innovation, and therefore the money.

Surkov added that the latest experimental equipment would be needed to make the best use of the expertise of both Russian scientists and engineers and their foreign colleagues, and to provide a state co-financing for deserving projects.
The final requirement, he said, would be the first success story.

"The first billion rubles, dollars, euros earned in the technological transformation of a traditional industry. Or in creating a new industry. Then it will be going so there is no stopping it," Surkov said.