The End of the Gulag 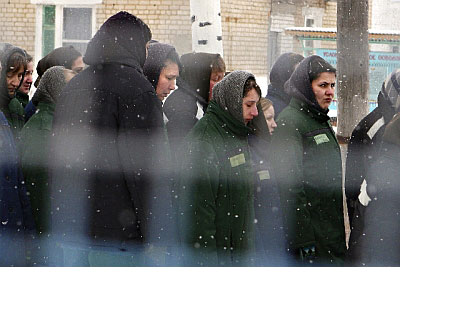 Kineshma Women’s Colony No. 3 is located in the IvanovoRegion, 200 miles northeast of Moscow

President Dmitry Medvedev announced the prison reform in response to the death of Sergei Magnitsky, a lawyer who entered pretrial detention healthy and died in pain 11 months later.

The bus drags along a bumpy road past endless frozen fields, sleepy woods and occasional crooked houses, finally parking outside a large white wall edged in barbed wire. The building appears to be a monastery, but since 1924, it has housed the Kineshma Women’s Correction Colony No. 3, a prison about 200 miles northeast of Moscow.

Life changes little for the prisoners here, regardless of the decade. As in hundreds of other Russian prisons in the most remote corners of Russia, murderers live shoulder to shoulder with petty thieves and first-time prisoners, all in conditions that would not have been unfamiliar to Alexander Solzhenitsyn as he described them in “The Gulag Archipelago.”

No system, not even the notorious Russian Gulag, stays the same. Relics of the Stalin-era, 755 Russian hard-labor correction colonies are slated to disappear, stated Alexander Reimer, head of the Russian Federal Prison Service, in a recent interview with the radio station Echo of Moscow.

The government will scale back the second-largest prison population in the world. Recidivists will be separated from first-time offenders—40 percent of the population in a system holding 900,000 inmates. Small crimes will result in home arrest or probation. Squads of inmates who assist prison management, but are infamous for violent abuse of their power, are being abolished.

The event that finally got the reform rolling was the notorious death of Sergei Magnitsky, a 37-year-old lawyer who entered a Moscow pretrial detention center healthy and in 11 months, on November 16, 2009, after days in pain, died being denied medical help. Magnitsky was one of 386 suspects in Russia who died in 2009 during pretrial detention alone. Hundreds more died in colonies because of violent treatment, torture and lack of medical care.

President Dmitry Medvedev announced a reform of the prison system in response to Magnitsky’s death. Medvedev first ordered a purge of the 20 top officials in the Federal Prison Service. But he also demanded a new approach to corrections. Already, the worst offenders are being separated from other parts of the prison population in prison colonies all over Russia.

For the rest of the women, the day at the colony, called IK-3, starts with morning exercises in the snowy jailyard at 7 a.m. All women work 8 hours a day sewing uniforms for prison service guards. In their leisure time, they can watch television, play chess and even rehearse plays and musical programs.

Yevgenia Lemekhova, 25, was convicted of stealing 7,000 rubles ($250) from an acquaintance, and she is hoping the reforms will get her out of the prison soon. Lemekhova, a shy girl folding camouflage jackets in neat bundles in the sewing department, could end up spending the remaining two and a half years of her 5-year sentence at a newly opened prison colony with lighter conditions. There, she will be allowed to wear her civilian clothes and work and spend her money outside the fence. She could also appeal to be allowed to return to her apartment in Murmansk, as home detention was legalized in Russia on Jan. 1.

In announcing the reform, Medvedev said he was saddened to learn of a person who went to prison for two years for stealing a hat. “Why? He is not coming back any better from there,” Medvedev also said. The President ordered the release of two men in Krasnoyarsk, in Siberia, who were imprisoned for stealing a chicken.

Maria Kannabikh, a member of the Public Chamber, a group of appointed advisers to the government, and author of the reform, said life will be much harder for about 400,000 Russian recidivists. Most of them will not have a right to work, study or meet with relatives. “The system is in renewal,” she said. “The state invests in new modern prisons; the new Minister of Justice and the director of Federal Prison Service plan to improve Russian jails up to the European level.”

Kannabikh also mentioned that by cutting today’s 360,000 prison staff by at least one third, the reform would help to increase the salaries of the remaining employees, and eventually make the profession more respected. “We should change the attitude and make this profession as respected as it is in Sweden or Norway,” she said.

Some inmates, and even guards, are concerned about the coming reforms. For the last eight years, IK-3 has been home to Marina Vysotskaya. Vysotskaya, 27, was convicted for murder and sentenced to 10 years in prison when she was 19 years old. Her bed in the corner by the window has little pink curtains for privacy. Like all the beds, it is identified with a label with her name and her crime on it: “For Murder.” “My character has changed in prison,” she said. “I think of life in a different, more adult way. I like the order in this colony.” Vysotskaya said she was concerned that the reform would require IK-3 wardens to move her to a much more isolated prison for the last two years of her sentence, separating her from the inmates she has served with for many years.

This reform is just one step on the path to reducing crime in Russia, the prison manager of IK-3, Tatyana Vakhromeyeva, said. Other agencies must also change. “We see a significant increase in drug crime, and also a lot more robberies and theft cases nowadays,” she said. “That happens because the system does not assist convicts after they come out of prison.”

Vakhromeyeva said she does not believe that convicts like Vysotskaya should be transferred from large camp-style prisons such as IK-3 to institutions where the prisoners are separated. She worries that such a move will hamper her potential to succeed when released. “Long-term convicts are used to interacting with a diverse group of people,” Vakhromeyeva said. “The transfer to prisons will break them psychologically,” she added.

Federal Prison Service managers have begun to meet with outside experts experienced in monitoring human rights violations in prisons. At a meeting in December, Lev Ponomarev, the leader of the Moscow-based group For Human Rights, and a former Soviet dissident, described cases in which convicts had to pay money to prison guards just to be able to survive their term. “The Gulag is not just walls and barbed wire,” Ponomarev said. “The Gulag is a system of injustice, of threats, of psychological and physical pressure. The reform is focused on changing the facilities; it should also pay attention to changing the culture of the Gulag.”

Earlier this month there was a dance performance at IK-3. The dining room was transformed into a concert hall for the occasion, and looked tidy and festive, even a little bit magical. Two inmates operated the sound system with serious faces. Couples began the Cha-Cha.