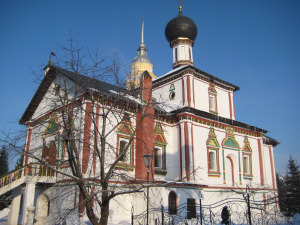 The medieval city of Kolomna, seventy miles south east of Moscow, is not a well-known tourist destination. During the cold war, the town's military activities kept it off-limits to foreigners. Since the doors reopened for tourists in the 1990s, the ancient fortified kremlin with is beautiful monasteries has been restored.

Russian visitors already arrive by the busload in the summer months, but you generally won’t find this lovely town in English-language guidebooks yet. There are plenty of good reasons to go there, especially at this time of year. In the crystal stillness of the Russian winter-spring, the muffled streets are deserted and the ancient town is yours to discover.

The town’s position on a high bank above two rivers made it a useful fortification. The earliest records, written on birch bark, date from 1177. Since then, it has been in turn a center for cattle farming and railway engineering. Merchants built handsome stone mansions, some of which survive today. Catherine the Great visited in 1775 and sent her favorite architect, Matvei Kazakov, to further embellish the town with neo-classical churches.

Sophia Yurievna, a resident and scientific researcher, is proud of what they have to offer. "Kolomna was a closed town and was never made part of the 'Golden Ring,'" said Yurievna. "Many tourists visit Sergiev Posad, for instance, but few people realize that we have four times as many historic monuments here in Kolomna." Her own work revolves around the restoration of an eighteenth century mansion, now a museum, once inhabited by local writer Ivan Lazhechnikov.

The restoration of Lazhechnikov’s house is the latest in a series of sensitive developments aimed at attracting visitors to the town. The high red brick walls, built by the same Italian masons who fortified Moscow's Kremlin in the 15th century, have been mended. The medieval warrior-saint, Dmitry Donskoi, who assembled his troops here on the way to the Battle of Kulikovo, now rides his bronze horse along the bank of the Moscow River. Locals are equally proud of the huge gold-walled stadium behind him that dominates the riverside skyline. It houses Russia's largest indoor speed-skating center. Kolomna has been home to two Olympic champion speed skaters.

For amateur skaters, there is a little outdoor rink in the town’s park, along with an avenue of gleaming ice sculptures. In the middle of the park, a glacial fort with slides is a meeting place for local families.

The local history museum opened two years ago inside the walled Kremlin itself. It features archaeological finds, stuffed wildlife and memorabilia from the Great Patriotic War (World War II). The 19th century Brusensky monastery has converted some of its buildings into art galleries with shops, cafes and exhibitions by local painters. Bottles of mead or honey wine are among the souvenirs on offer. The most popular brands include Marinskaya Bashnya (Maria's Tower), named after the twenty-sided tower where the wife of the 17th century tsar-imposter False Dmitry was imprisoned. The wine is an acquired taste, but the label is brilliant.

In the center of the Kremlin, the gorgeous Uspenskaya (Assumption) Cathedral is attached to the Golutvin Convent, a progressive institution whose nuns make pottery, preserves and fresh bread. Behind the colorfully painted Trinity church, a new wooden chapel and mosaic fountain protects the holy well. There is even a woolly, two-humped, bactrian camel among the convent's apple trees to entertain visiting school groups.

Through the Pyatnitskaya ("friday") gate at the far end of the Kremlin, you reach an area of old wooden houses and stone churches, known as the 'Posad.' The oldest secular building in town, the 17th century Voyevody House, is located here. There is also a new Museum of "Pastila" — apple candy — the wing of an 18th century estate. Visitors drive through miles of orchards on the way into Kolomna and so it is no surprise that apple products are a local specialty. These sweets, which Kolomna’s residents have manufactured since 1735, look like Turkish delight or marshmallows, but taste of pure fruit. The museum offers demonstrations, tea party tastings and sells the pastila themselves in handmade boxes featuring a picture of Catherine the Great.

Getting there and back
A visit to Kolomna is an easy day trip from Moscow. Regular buses leave from outside Moscow’s Vykhino metro station and cost 210 rubles (7 dollars). The modern, comfortable buses show movies and have snacks and drinks for sale as you wind through the Russian countryside. You can also catch the local passenger train (“elektrichka”) from Moscow’s Kazansky Station. It costs the same as the bus and avoids any traffic jams. The Golutvin and Kolomna train stations are a little way out of town, but Kolomna is walking distance from the sights of the Posad.

Where to eat
Besides the honey wine, apple sweets and monastery jam, you can find some good, savory options in one of the town’s cafes. There are numerous options in the newer part of town, towards Golutvin train station. The fancy Nameki café in the Liga Art Gallery is just inside the gates of the kremlin. If you want an authentic Russian experience, try the Pogrebok, on the corner of Lazerev and Lazhechinikov Streets. This cheap and cheerful canteen, in the basement of a nineteenth century estate, serves wholesome, home cooked food at bargain prices.