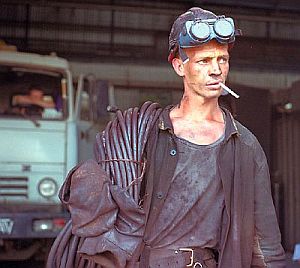 A worker in the steel town of Magnitogorsk, acommunity dependent on a single industry

Russia is looking at the large-scale resettlement of residents of single-industry towns in a bid to tackle high unemployment in depressed regions. The project may start in the Volga town of Tolyatti with the workforce of auto giant AvtoVAZ, which has announced massive job cuts.

Laid-off AvtoVAZ employees will be relocated to a plant making rail carriages in the Leningrad region, and if the plan is successful, it will be used in other single-industry towns. The Mortgage Loans Restructuring Agency (ARIZhK) developed the relocation programme, director Andrei Yazykov told Vedomosti.

Alexander Semenyaka, head of ARIZhK, explained that the first people to be involved in the relocation could be the residents of Tolyatti, who will be offered the chance to move to the city of Tikhvin to jobs at a new factory owned by the financial and industrial group IST. The factory will start work at the end of the year and employ 3,500 people, an IST group spokesman said. “We’re interested in having an outside work force come in, including from AvtoVAZ, since its workers are familiar with assembly-line production, which we’ll also be using,” he said.

The company is already building housing for them. This year, 450 to 500 families will be able to move under the ARIZhK programme, and the agency is willing to spend 400m to 500m roubles (£8.5m to £10.6m) to that end, Yazykov said. Since housing is more expensive in Tolyatti than in Tikhvin, people who move most likely won’t need mortgages, he said.

According to ARIZhK’s calculations, there are more than 350 single-industry towns in Russia, including 17 where the situation has reached crisis levels, and 60 that could end up in crisis soon.

After receiving ARIZhK approval for help, a person relocates to the new city to be given a job and temporary housing while looking for a new home. The agency uses the old apartment as collateral to give a two-year loan at two-thirds of the Central Bank’s refinancing rate (5.8pc at present). The size of the loan would be equal to the value of the apartment, minus the interest that would accrue over the two years. The money must be spent on housing in the new region, and, if the sum is not enough, the worker would need to take out a mortgage. The programme participant would then have two years to sell the old apartment or hand it over to ARIZhK. Neither the individual nor the agency will end up in the red, Yazykov said, adding that he was counting on house prices to start rising – even in economically struggling single-industry towns.

If the AvtoVAZ workers are successfully resettled, the programme will be used in other single-industry town. No new budget funds would be needed, as ARIZhK has the resources to finance the programme.

All photos by Max Sher

AvtoVAZ is transferring about 12,000 people to subsidiaries, but it is unlikely that many of them would move, said Nikolai Karagin, head of the company’s union. “Officials in Samara are already working on measures to develop other production in Tolyatti. Besides, the Leningrad region has enough of its own unemployed, for example in Pikalyovo,” he said.

Over the years, people in Tolyatti have acquired comfortable apartments, said Zholneruk, which will make them reluctant to leave. He wasn’t worried that ARIZhK’s programme would sink the local property market. “There are very few buyers, and people are unlikely to sell for less than the appraisal price set by ARIZhK,” he said.

The programme’s logic is good – the state should help people get out of depressed cities, said Natalya Zubarevich, from the Independent Institute for Social Policy. But she was also surprised by the choice for relocation. “They’re exchanging one problem for another, and with state money. Tikhvin is a second Pikalyovo,” she said. “If they want the programme to work, people shouldn’t be limited to moving to a specific city.”

According to Yazykov, those limitations would eventually be eliminated.