Looking for a local after Hiddink goes 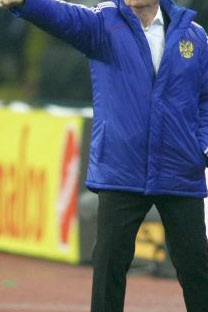 Guus Hiddink has said he will not renew his contract as coach of Russia’s national football team when it expires on June 30. One of the most respected coaches in world football, Dutchman Hiddink has been in charge of Russia since 2006, taking the team to the semi-finals at Euro 2008, but failing to qualify for this year’s World Cup finals in South Africa.

Hiddink confirmed that he had spoken with new Russian federation president Sergei Fursenko. “It was decided that we will part ways after the expiration of my contract,” he wrote in Dutch newspaper De Telegraaf. “We decided this now in order to give the federation enough time to look for a successor.” The Russian Football Union said the move was Hiddink’s decision.

Vitaly Mutko, the country’s sports minister, said recently that the country needed a homegrown coach. Mutko’s main achievement in his previous job as head of the Russian Football Union was landing Hiddink in 2006. Hiddink said last year he supported Sergei Kapkov, an associate of Chelsea owner Roman Abramovich, to head the Russian Football Union after Mutko was forced to step down.