Growth in store for big supermarkets 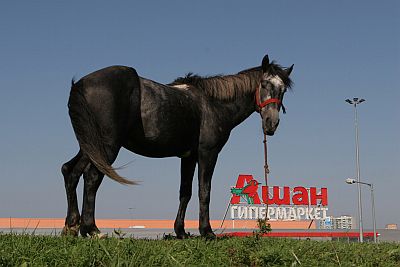 Pundits leapt on French retailer Carrefour’s decision to pull out of Russia last autumn as more evidence of foreigners fleeing the country as the economy tanked. However, lost in the hailstorm of bad news was the fact that Carrefour’s rival, fellow French supermarket chain Auchan, was not only staying, but continuing to expand.

Carrefour was not alone in its retreat. In 2007, German supermarket giant Edeka Zentrale AG closed its Marktkauf hypermarket, while Turkish company Ramenka spent most of the last couple of years gradually closing its chain of Ramstore hypermarkets and supermarkets. However, other international players are thriving: cornflakes, after all, do not enjoy the same geopolitical significance as oil and gas.

Auchan has been the most active of the burgeoning number of foreign companies hoping to cash in on Russia’s 142m-strong consumer market. It nipped in to buy Ramenka’s hypermarkets and continues to expand its operations in Russia (just as it has next door in China). Rapidly earning a strong reputation in emerging markets, the privately held retailer from Lille entered Russia early, and is now one of the most popular anchors among real estate developers, according to Jacob Grapengiesser from East Capital – a fund manager concentrating on Eastern Europe, and a significant holder of shares in Magnit, the country’s second largest grocery retailer.

Auchan currently has 38 stores in Russia, and plans to open six new hypermarkets in 2010. Jean-Pierre Germain, CEO of Auchan Russia, said the company is willing to “adapt to different markets in different regions of Russia”. By way of illustration, a roll-out of Raduga stores – a new, low-cost concept – has begun in smaller cities with populations under half a million people. The company suggests it could open up to 100 of these stores this year. According to Natasha Zagvozdina from investment bank Renaissance Capital, the French company is joined in the list of the country’s top five grocery retailers by Germany’s Metro, which has been expanding aggressively across the region, and three Russian operators. As a result, foreign companies are now the third and fourth largest retailers in the Russian market.

Carrefour blames poor prospects of achieving a market-leading position for the withdrawal, but most of the business press noted rumours that minority shareholders were demanding the company cut costs in the face of the economic crisis. In reality, the retailer met a perfect storm: strong established competitors in a vast country with underdeveloped infrastructure. The global economic crisis was the straw to break the camel’s back.

But it’s also the size and early development of Russia that makes the prize so tempting. Grapengiesser predicts that “[modern grocery chains] will continue to grow for many years”. In fact, despite continuing to capture business from outdoor markets and other independent operators, grocery chains still enjoy less than a 40pc share of food sales across Russia, according to Zagvozdina. “The consolidation opportunity in Russia is absolutely huge,” she states, a view backed by the claim of Lev Khasis, CEO of leading grocery retailer X5, that over the next decade his company hopes to double revenue every three years.

Magnit’s deputy CEO, Oleg Goncharnov, told Russia Now: “Today, the Russian retail sector has a turnover of $200bn a year. We are the second largest player, but we only have a 3pc market share. There is enormous potential: Russia is one of the most dynamically developing retail markets in the world.” Not only did Magnit leave its expansion plans for 2009 unchanged, it even saw revenues increase that year by a third, easily beating 2008 (a record year for the company) – despite Russia’s overall economic decline of just under 9pc.

But there is a lot of work still to do. The sheer scale of Russia, its poor transport infrastructure, and an absence of experienced third-party logistics operators make the supply chain and distribution conundrum a key element. And what of those activist investors believed to have pressured Carrefour? Try convincing them to live with five years of losses while distribution networks are being built.

This leaves acquisition the only realistic route these days for new entrants, according to Marat Ibragimov, an analyst in Citibank’s Moscow office. But while no one is counting out a large deal in the coming years, it looks unlikely in 2010. X5 and Magnit have seen their share prices lead the recovery on the stock markets as their lower-priced formats have benefited from dropping disposable income levels, making an acquisition frighteningly expensive, especially looking at the fragmentation of the market.

Like Magnit, the supermarket leader X5 has a massive turnover on the back of a tiny market share; the company’s market capitalisation is around $7bn, but it controls only 4pc of overall food retail business in Russia. Buying a company as large and prosperous as X5 could only be funded by debt, which means that unless the buyer can improve operational efficiency at the purchased company, then profitability, impacted by the cost of that debt, will drop. “I don’t think that if a large international player bought either X5 or Magnit tomorrow, that they could improve their efficiency in the slightest,” says Zagvozdina.

The titans of the Russian food halls are battling it out for more market share and everything is still to play for. The crisis has led to rationalisation in the sector and the survivors are looking forward to a recovery in consumer spending. “We need to see three or four quarters of improved GDP before consumer confidence really starts to recover properly,” says Grapengiesser, “but companies are now starting to position themselves to take advantage [when it does].”

It would seem that Auchan is not the only retailer with ambitious plans after seeing its position strengthened in the last year or two. Magnit, for instance, with the aid of a successful SPO [second public offering] at the end of October (which raised $365m), plans to plough $1bn into opening up to 580 new stores in 2010 (to add to the 3,228 it already operates, the vast majority smaller stores outside the major cities), as well as strengthening its logistics infrastructure. Russia’s food retail business was already the fastest growing in Europe, but while most western European countries are now going backwards, the Russian market is expected to go up a gear from the end of this year. -