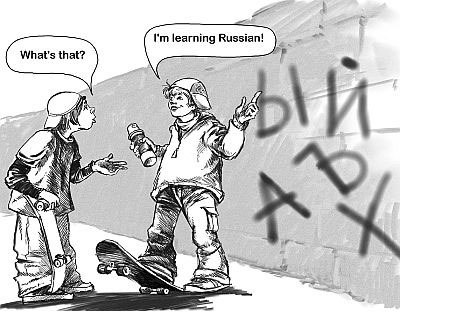 A surprising rise in the popularity of Russian language studies has occurred on American college campuses. Mark Teeter ponders how we can seize the moment without it falling off once again.

This is basically correct, although for “drift” others might have used a more graphic term, such as “down the drain.” In any case, Americans can look back over a year of their nation’s international conduct without visibly wincing. While relations with Russia are still some ways from the reset so hopefully articulated last February, they are in any case moving again.

America and Russia can now afford some guarded optimism about their relationship. For beyond cautious assurances at the Ben Rhodes level and the apparent good chemistry between Obama and Medvedev, there is evidence emerging from U.S. college campuses that American interest in things Russian is on the rise again—and this after not one but two decades of decline.

This is a heartening prospect for a people eternally sensitive to what outsiders think of them. Muscovites inside and outside the Kremlin appreciate it when foreigners make an effort to perceive them outside the traditional otherness that Westerners often associate with Russia: the unsettling we/they and here/there distinctions abetted by both baseless stereotypes (bears in the streets) and frustrated shorthand summaries (riddle, mystery, enigma). A lot more American students are making such an effort these days.

The field of Russian studies at U.S. higher education institutions was largely limited to “brave beginnings [by] a few isolated Slavic scholars” before World War II, when the U.S.-Soviet alliance triggered a sudden need for intensive Russian language and area studies courses. By 1946, some 190 U.S. colleges offered Russian, just in time for the onset of the Cold War to put a serious damper on things. This downturn was followed by another mighty upswing after the Soviet Union’s Sputnik launch in 1957, when a panicked U.S. Congress funded Russian studies at unprecedented levels; by 1968 nearly 32,000 American college students were taking Russian.

But the field slowed down again with the numbing stagnation that marked the Brezhnev era, that is until perestroika and Gorbymania inspired the century’s final Russian studies boom in the late 1980s. After that, alas, over-expansion caught up with the discipline: Demand for Russian language courses fell off, then flat-lined at many institutions; sections, programs and whole departments were closed. The field went into a downward “drift” (ring a bell?), from which there did not appear any obvious salvation: Who needs Russian studies in the 21st century?

And yet, lo and behold: Last month the journal Inside Higher Ed reported on a new upsurge in the field. Professors from an encouragingly broad selection of institutions were quoted identifying both old and new criteria to explain a steady rise in enrollment in Russian language and related courses since 2006.

If careers in intelligence, the military, business, philology and the arts make traditional sense, other reasons now cited include sports law (“to deal with Russian hockey players”); exchanges (“I got to go to Russia in high school”); a newly cool Russo-geekiness (“this video game I play has a lot of Russian in it”); and significant influence from immigration (“our neighbors are Russian,” “my hockey coach is Russian,” “my best friend is Russian”).

Good for us, and good for Russia, surely. Whatever admixture of Pushkin, Putin and Pasha-next-door is responsible for this recent surge, the point now is not to waste it. If American Russian studies can forswear its roller coaster past and consolidate the new gains—with charismatic teaching and more exchanges—then a formidable new wave of American Russianists may indeed be in the making.

At the risk of marvelling at the obvious, the great diplomats, scholars and popular practitioners of this century— the new George Kennans, James Billingtons, Hedrick Smiths and David Remnicks—are more likely to appear when there are more opportunities for them to do so. And the sooner they show up, the more assuredly we’ll move toward the real, sustainable, broad-based reset that is already several decades overdue. –