A promising start to a new decade 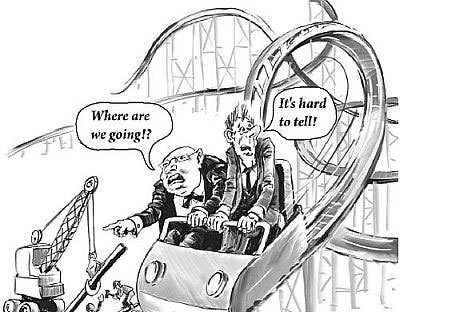 From the depths of its 1998 financial crisis, which tested the proverbial patience of the Russian people, to the credit-fed boom of 2007, to the seeming meltdown of the economy just a year ago, to its still seemingly unbelievable rebound as we start the new year, one learns to expect the unexpected when it comes to Russia. This zigzag pattern was not a spontaneous occurrence, nor does it have to continue.

The key has been, and will continue to be, government policy. And for all the criticism that can be heaped on the authorities who could have done more or could have acted sooner, they do deserve some credit for reasonably good economic management. It didn’t have to turn out as well as it has.

In the run-up to the crisis, Russia, relative to spendthrift countries such as Spain, Ireland or Ukraine, was running huge budget surpluses – thus withdrawing stimulus that would have otherwise amplified the private sector’s euphoria with a veritable explosion of aggregate demand. It also saved the oil windfall for the most part so that it had a comfortable cushion to soften the blow when the global crisis erupted in late 2008.

Moreover, once the crisis emanating from the US hit Russia, the policy response was adequate. Although too much public money was no doubt wasted on undeserving corporate bailouts, the brave decision was to devalue the rouble. This was not inevitable nor politically palatable. The mini-steps to depreciate the currency between November 11, 2008, and January 22, 2009, took courage in view of both public opinion and powerful vested interests that owed considerable foreign currency-denominated debt. The cushion of reserves meant Russia had the luxury to soften the blow through a gradual adjustment that allowed time for worried residents and companies to switch into dollars and preserve their nest eggs or repay debt.

In the new decade, Russia’s economy is coming back. Even after what was spent to soften the impact of the devaluation, the country still has roughly $450bn (£290bn) in reserves – the third highest in the world. The RTS rose by almost 129pc last year, more than markets in Brazil or China. For the first time in more than a generation, the population did not decline last year, and the inflation fell to 8.8pc, the lowest since the emergence of an independent Russia in 1992. Despite the additional emergency crisis spending and revenue decline, the budget deficit was maintained at an estimated 6pc of GDP, which was readily financed without borrowing by drawing on the oil stabilisation fund. And after its initial plunge in the first quarter of 2009, real GDP and industrial production have grown on a month-on-month basis. Year-on-year numbers will soon turn positive, and GDP is likely to grow by 5pc or more in 2010.

Whatever the faults of the Russian government in many areas, its handling of macroeconomic policy has been laudable. The international environment is filled with traps that have ensnared the sophisticated, such as Britain and Denmark, and the incautious, such as Iceland. Monetary and fiscal policies have been executed with alacrity, at least relative to many others.

The outcome is that Russia is well poised to recover even in the context of a feeble global economy and should be able to display impressive performance among the emerging market economies over the next couple of years. Good luck is not the main explanation. Of course, Russia is a country richly endowed with natural resources – but so are Venezuela and Nigeria.

Indeed, the critical point is that Russia – perhaps having learnt the hard way about the folly of unmanageable debt in 1998 and guided by an economic team led by finance minister Alexei Kudrin and Central Bank chairman Sergei Ignatyev seasoned by that ordeal – has avoided the pitfall of debt that engulfed countries from the US to the UAE in a colossal balance sheet crisis. Highly indebted countries could face years of stagnation while paying down their debt burdens. It is likely that the future will be all about balance-sheet deleveraging in the advanced economies, whereas most of the emerging market world will be largely unscathed by the scourge of debt – with the exception of a number of smaller, more distressed economies, such as some on the fringe of Europe.

For Russia, as one of the larger, low-debt, resource-rich emerging market countries, its time may be at hand. Whether this opportunity is seized or squandered will depend on two key elements: government policy and the external environment.

As in the past, Russia – unlike China – is too small to have a major impact on the global economy. Oil prices may well not remain in the current $80 per barrel range, and the dollar is subject to contradictory pressures as are the global markets in which Russia is enmeshed. Whatever it is, the external situation will be a given.

So the real issue is whether government policy can continue its reasonable job in riding hard on the crisis and confront what may lie ahead. With interest rates set to decline further and money supply and deposit growth in banks continuing to recover, banks are likely to start expanding credit in a “normal” economy where real interest rates are positive for the first time in years.

Large speculative capital inflows could present a challenge to avoid a monetary and credit surge. Lower nominal interest rates could help, and with stronger banks the Central Bank could take other steps to make foreign borrowing more expensive for Russian banks and companies. A tighter budget will also contribute to macroeconomic stability.

Some lessons have been learnt the hard way since Yegor Gaidar launched Russia onto the path of a globalised market economy. Hopefully, those lessons will not be readily forgotten. A future fraught with uncertainty and volatility would be a challenge to any government, but in this new decade, where debt burdens could well be the decisive issue in determining the well-being of countries, Russia is well-placed.