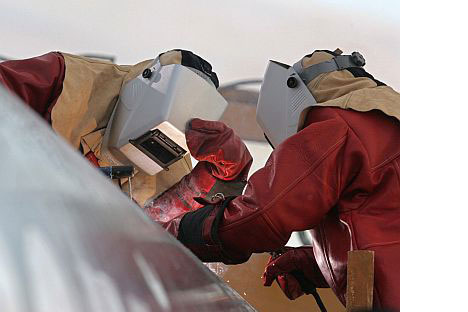 Working on the Nord Stream pipeline in Babaevo, Russia

Russia has clashed several times with Ukraine over unpaid gas bills – resulting in most of Europe being cut off from crucial gas supplies in the depths of winter. This year, a row was avoided after Kiev, with the help of the IMF, scraped together the cash to pay its bill on time. But two new gas pipelines to the north and south of Ukraine – the first of which comes online next year – should end the uncertainty completely.

Russia’s imperialistic hold over the oil and gas producers in Central Asia – inherited from the Soviet Union in the form of oil and gas pipelines – has also been broken. A new gas pipeline running from the gas-rich republic of Turkmenistan, in tandem with the currently operating oil pipeline snaking from oil-rich Kazakhstan to China, threatens to be a game-changer.

The Kremlin’s response has been to build more pipelines, also heading east. One possible result of this emerging lattice of pipelines is that energy relations in and around the Continental and Asian landmass will become more civilised as competing routes force both buyer and seller to put market interests first, and politics a definite second.

The Trans-Asian gas pipeline cost $6.7bn to build and is the first out of the Caspian region that runs east, linking Turkmenistan’s massive gas basin with China’s west-east gas pipeline. Now Turkmen gas can be sent as far as Shanghai and Hong Kong. The pipeline will carry up to 40 billion cubic metres (bcm) by 2013 – accounting for almost half of China’s gas needs.

Knitting pattern: a latticework of pipes will weave together countries in Europe and Asia

China’s growing importance in the region led the Kremlin to follow suit in November: Prime Minister Vladimir Putin signed a deal that promise to deliver 68bcm a year to China through two new pipelines starting in Siberia – providing China with the other half of the gas it needs. The Russian deal represents an abrupt about-face for the Kremlin, which has traditionally been very wary of its eastern neighbour. Pipelines are intensely political beasts when they are in the planning stage; but once constructed they are the geo-political equivalent of marriage.

The Turkmen gas pipeline follows on the heels of a new Kazakh oil pipeline to China that rounds out the new eastward-looking energy transport infrastructure. The first phase of the Kazakh oil pipeline went into operation in July last year; a second phase will link Kazakhstan’s rich Caspian oil resources to China.

The two Chinese pipelines have raised the ante in the energy game for Russia and broken its monopoly on the transport of oil and gas out of the region to customers in Western Europe. However, the increased competition has led the Kremlin to raise its game, too, and it is hitting back by beefing up its own energy transport infrastructure.

Underpinning the annual clash between Russia and Ukraine is the fact that Russia is forced to send about 80pc of its gas to Western European customers through Ukraine, as there is only one pipeline that connects Russia to the rest of Europe.

Russia has proposed two new routes that run to the north and south of Ukraine to diversify the supply routes: Nord Stream runs from northwest Russia to Germany; and South Stream runs from southern Russia under the Black Sea to Turkey. Mr Putin ordered construction to start on Nord Stream at the end of last year, after the pipeline got the last environmental permits from Germany.

The other members of the EU along the way – the Baltic states and Poland – were miffed that former chancellor Gerhard Schroeder, who negotiated the deal (and is now chairman of the company that will run the pipeline) bypassed them, and, in so doing, denied them any of the transit duties. Still, the pipeline is scheduled to go online in 2011 with a throughput of 27.5bcm a year. Any subsequent rows with Ukraine over money will stay just that: 2009 should go down as the last year Europe faced the prospect of being cut off from its heating gas in winter.

South Stream, the second pipeline, will close the circle, but this pipeline has had a harder time of it. It is competing with the EU-sponsored Nabucco pipeline that runs over roughly the same route, but is supposed to source gas from Central Asia, missing Russia out. The problem is there is only demand enough to support one pipeline.

The Kremlin worked very hard in 2009 to get South Stream off the ground and managed to sign a string of deals with states like Bulgaria and Croatia, who will be among the pipeline’s main customers. By the end of the year it looked like Russia had won the race, largely because the new Trans-Asian will soak up much of Turkmenistan’s spare gas. However, never say never when talking about pipeline politics; the issue will really be decided when someone actually starts building their pipeline.

More in the pipeline

With the gas transport problems well in hand, the Kremlin has turned its attention to rounding out the oil pipeline infrastructure. Like the Russian gas pipes that will now run both east and west, Mr Putin relaunched a new and ambitious Eastern Siberia Pacific Ocean (ESPO) oil pipeline on December 29. The 3,000-mile ESPO is the longest and most expensive of all the pipeline plans on the table at the moment. Strategically, it will allow Russia to deliver oil directly to the whole of the Pacific Rim significantly diversifying Russia’s customer base.

Construction was begun in April 2006, but the project has regained its momentum since a branch to the China’s Daqing oilfield was started in April last year (a pipeline originally proposed by Mikhail Khodorkovsky and the main reason he clashed with the Kremlin). This Chinese dogleg will come online first in 2011, carrying 15m tons of oil a year and the second phase is due to be finished in about 2014. At full capacity it can carry 80m tons of oil a year and will cost at least $30bn (£19b) to build.

But the success of the pipeline will depend on the currently untouched oil resources thought to exist in eastern Siberia; optimistic forecasts say the Eastern Siberian fields will reach production levels of 70-80 million tons a year around 2030, but serious exploration of the region will only begin this year.