Battle against the blizzards 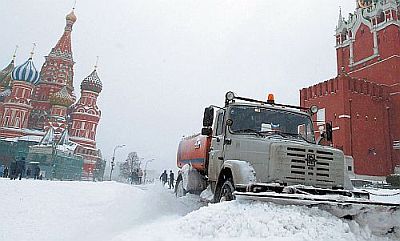 This year’s snowfalls started in Moscow rather late – in earlyDecember. The winter turned out to be the coldest for the last25 years and one of the heaviest snowfalls

Fifteen thousand snowploughs and trucks, hundreds of snow-melting plants, 30,000 shovels, thousands of tons of crushed gravel and de-icing agents: every year, municipal workers wage a winter war against the avalanches of snow that descend on Moscow.
Winter in Moscow lasts four months on average. This year’s winter has been especially cold, with temperatures ranging from -20C to -29C for a month. Meteorologists say this hasn’t happened in almost 60 years. But even if the winter is mild, as has been the case in recent years, that doesn’t mean there won’t be any snow. Every year, Moscow sees some 50 snowfalls. If the streets weren’t cleared by snowploughs, Muscovites would be wandering around up to their waists in snow and traffic would be at a permanent standstill.

To witness the city’s war on snow first-hand, a Russia Now correspondent recently joined the operation to keep Moscow moving.

Forecasters were predicting a heavy fall of four to six inches. (Usually, falls are of between one and two inches and are easily manageable. All Muscovites know that the only way to prevent accidents on the road in winter is to have snow tires, keep one’s distance from the car ahead, and drive slowly.)

With the first news of an expected snowfall, all department heads responsible for snow removal meet at city headquarters.

The departments include municipal works, transportation, traffic inspection, and meteorology. The meteorologists, almost like intelligence agents from the front lines, report on possible scenarios for Moscow and where the storm should hit hardest. The men at headquarters then assign their snow-removal “forces” to the front “under attack”; decide how much of which de-icing agent to sprinkle and where; and which “weapons” would be best for the job at hand. Traffic inspectors report on the situation on the roads, suggesting ways to prevent bottlenecks. Once the plan of action has been approved, the work begins.

Approximately three hours before the expected snowfall, the snowploughs and snow-removal trucks take to the city’s main highways. Their mission: to clear the roads down to the black asphalt and sprinkle them with de-icing agents.

“That way during a snowstorm we prevent the formation of that snowy mush that cars can get stuck in,” says Pyotr Biryukov, head of the Moscow City Municipal Economy Complex.

“Modern machines can do 10 things at once: collect the snow, sweep, spray or sprinkle agents, take note of potholes for future repairs, check the temperature of the asphalt, etc. Snow-removal combines drive along the roads in a staggered formation, three or four abreast, so as to clear all the lanes at the same time.

“On the one hand, this sort of snow removal is effective. On the other, motorists complain that it makes a bad traffic situation even worse, since those snow-removal machines can only go so fast (10 to 15 miles an hour) and the cars pile up behind them.”

About six years ago, the salt used to melt snow was heavily criticised by the people of Moscow. It not only ate through the snow, it ate through boots and, rising with the warm air, destroyed miles of tram and trolleybus wires. The authorities now use thousands of tons of crushed gravel on the pavements and other main walkways. It is kept in special containers near tricky highway junctions to prevent heavy trucks from stalling on the ramps. A number of roads are equipped with special machines that automatically sprinkle the road with agents. The Moscow ring highway boasts 10 such “fountains”. Four of them are at the intersections with the most difficult highway, Yaroslavskoe Shosse.

To clean and de-ice the 24 miles of the Third Transport Ring takes the average snow removal machine three hours. During this time a new snowfall may occur, prompting another meeting at headquarters. More snow removal machines are sent out and kept working until the snow stops, a method known as the “continuous clean sweep”. The snow is piled up along the edges of the highway; if any cars happen to be parked there, it takes a special truck to lift them out. The city owns 107 such trucks.

A few hours into the battle with a snowstorm, the city begins to lose: people and cars become stuck in the snow and traffic begins to pile up – although it does not come to a complete standstill. Now, the trucks that carry the snow away get to work. The snow is taken to snow-melting plants – the city has 46 stationary and 146 mobile ones – each able to process up to 300 tons of snow in a 24-hour period. The mobile snow-melters look like outsize meat grinders: the snow is poured into the top and the resultant water is poured down manholes – a little at a time, so as not to flood the sewer system. The mobile snow-melters are used only in the city centre.

But the snow storm has not let up. Highways are choked to capacity. Many motorists have left their cars parked near their offices, having decided to make their way home on public transport. But after half an hour of waiting at a bus stop, frozen and covered with snow, they trudge back to their cars. A driver with any foresight has a collapsible metal shovel in his boot for just such an occasion – and a heavy-duty rope in case the car is stranded in a snowdrift.

Maintaining this powerful municipal armada against the snow costs the city some 500m roubles (£10m) every year. Last year, Moscow mayor Yuri Luzhkov floated a revolutionary plan to banish winter snow from the city altogether. It would involve using cloud-seeding planes to force winter storms to drop most of their snow on the outskirts of the city. The experiment was supposed to have begun this winter. It would have saved the city more than 300m roubles in snow-removal costs. But the consequences of such an experiment require further study, and may have serious implications for outlying districts. So for now, Moscow’s war on the winter white stuff continues. -

2. 30,000 municipal workers and 15,000 snowploughs and snow removal machines are engaged in snow clearance. 5,000 workers and 5,800 machines are needed to remove snow on a typical winter’s day.

3. The city has 46 static and 146 mobile snow-melting plants. A staggering 300,000 tons of hard and soft de-icing agents are applied to the city’s roads annually.

4. Investment in snow-clearance systems and technology plus maintenance of equipment costs the city some 500m roubles (£10m) each and every year.