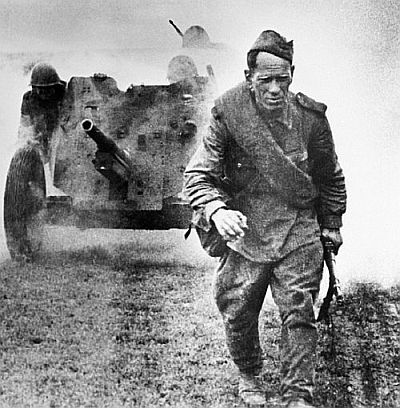 Soviet artillery units on the offensive in 1943, the turning pointon the Eastern Front

Something has changed in Russia. Twenty years after the collapse of the Soviet Union and the values on which Soviet society was based – and after two decades of hard times – the search is on for a firm footing in values and ideology. Attention has focused on the Second World War, especially the question of what we were fighting for.
It seems, in Russia and in the rest of the world, that there are two points of view about the war. The first holds that Stalin’s regime was undoubtedly tyrannical, but the war was fought for humanitarian values and freedom. The Soviet Union made a decisive contribution to the victory of these values, though it was certainly no showcase for them. The second may be called the revisionist one, that the Second World War was in fact two wars: the one on the Western Front a battle for democratic ideals and freedom; the other, on the Eastern Front, between tyrants seeking to oppress and enslave nations.

One Russian political analyst has even written that, while the Western allies were fighting for democratic ideals, most people in the Soviet Union had little idea of either democracy or Nazism, and were simply fighting for the Motherland. And even then they thought long and hard before fighting: Stalin’s regime had so “exhausted” them that many were ready simply to surrender. This, in part, explains why Russia lost the early stages of the war.

Most Soviet citizens fought simply for their Motherland, with no thought of ideology; the same can be said about most people in the anti-Nazi countries and those who fought in the Resistance. It is true that all the enemies of Germany and Japan also lost ground in the early stages of the war.

If one pursues the logic further, then, evidently, the French, as well as the Czechs, Belgians, Dutch and others, had been “exhausted” by democracy. That isn’t too far from the truth: democratic positions, as we now know, were seriously undermined throughout Europe as a result of the First World War and the Great Depression. This preordained the victory of the fascists and the Nazis in Italy and Germany.

One shouldn’t forget that the younger Soviet generation supported the regime because it had allowed them to have educations and careers that before had been off-limits to them. They were fighting, if you will, for the Soviet Dream, for anyone having the chance to become, if not general secretary of the Communist Party, then at least a marshal or a people’s commissar. Who was the backbone of the Resistance in France? Supporters of de Gaulle and the communists. De Gaulle could not be called a consistent democrat. In his youth he was, after all, close to the right-wing thinker Charles Maurras.

The countries that conducted a real underground partisan battle and put up a genuinely fierce resistance to the Germans were ones that had not been especially democratic before Nazism: Poland, Yugoslavia, Albania and Greece. Resistance leaders in these countries, such as Josip Tito and Enver Hoxha, could hardly be called democrats.

Indeed, only a small group of countries were then democracies, and far from contemporary notions of what a true democracy should be. Think of segregation in the United States; think of the state of human rights in British, French and other European colonies. In Eastern Europe there was real democracy only in Czechoslovakia: in Poland you had the Sanacja regime; in Lithuania Smetona’s dictatorship; in Latvia Ulmanis’s dictatorship; in Hungary you had the dictatorship of Horthy; and in Romania that of Antonescu.

Indeed, it’s not a question of the moods of the warring countries, their citizens and leaders, or of their political systems: it’s a question of the objective nature of a war which, from the point of view of the anti-Hitler coalition, was a war to preserve humanitarian and democratic values; a war for freedom in the highest sense of the word. This does not change the nature of the Soviet regime and its crimes, or the crimes of the English and the French in their colonies, or the discrimination against blacks and the lynch mobs in the US.

Soviet Army soldiers with German flags at the Victory Parade on Moscow’s Red Square on June 24, 1945

The question of what the communists were fighting for or, more broadly, the question of the values of communists in the USSR and in Europe is far more complex. The Russian Revolution was brought about by people who believed that the road they had chosen was the only possible road to a consistent democracy combining political and social freedoms. During the Second World War those same people believed that they were fighting for their ideals. This is the fundamental difference between communism and fascism/Nazism, which in principle rejected democracy as an institution. One has only to compare the works of classic communists, from Marx to Lenin, with those of fascists/Nazis, such as Maurras, Mussolini, Hitler, et al. It is not just the attitude toward democracy; it is the common spirit of universalism, humanism and cosmopolitanism that distinguished classic communism from the spirit of anti-humanism and chauvinism in fascism. Despite all the transformations, Soviet communism in those years still reflected classic values.

However one feels about the Molotov-Ribbentrop Pact, it did not run counter to the logic of the behaviour of leading countries in Europe at the time toward fascist Germany. From Britain to Poland and from Norway to Greece, all were trying to come to an understanding with Hitler behind each other’s backs and at each other’s expense. First, the socialists and liberals of France, conservatives and labourites in Britain, and their European colleagues betrayed the Spanish Republic led by fellow socialists and liberals by allowing it to be torn apart by German and Italian fascists. Then England and France, along with Poland and Hungary, betrayed Czechoslovakia. And between these betrayals they closed their eyes to Hitler’s annexation of Austria. What could the Soviet leadership expect from such players? Another betrayal.

When France and England (after Germany invaded Poland) declared war, they were “just pretending”. Small wonder that this war came to be known as the phoney war. This, evidently, is what Stalin was afraid of when he concluded his pact with Hitler: in the West there would be a pretend war, but in the East there would be a real one. To all appearances, Stalin foresaw an extended war in the West and did not want to be left alone with Hitler. A highly rational, if not always highly moral, foreign policy combined with a domestic policy that was irrational in its terrorism: that was the trademark Stalinist style. If the irrational anti-Semitism of the Nazis can be attributed to centuries-old prejudices peculiar to all of Europe, then the Stalinist terror cannot be attributed to anything but fear: fear of the ruling classes of old Russia that had suffered defeat in the Civil War; fear of the enemies real and imagined in one’s own party; fear of the anarchic element in the peasantry, and so on. These fears were in part justified, but they assumed a paranoid form.

Responding to criticisms that he and Khrushchev did not do enough to expose Stalin’s crimes, former first deputy premier Anastas Mikoyan reportedly said: “We couldn’t do that because then everyone would have known what scoundrels we were.” That, too, is the difference between communism and Nazism: the communist scoundrels understood who they were because they realised the gulf separating them from the ideals they revered; the Nazis liked being scoundrels – that was their ideal.

Many historians and politicians in the new countries that rose from the ruins of the Soviet Union justify the struggle of Ukrainian nationalists and Lithuanian guerrillas on two fronts during the Second World War (against the Nazis and the communists) by saying that neither side in this “clash of tyrants” was better than the other; that these members of small nations were simply fighting tyranny. This is disingenuous: similar formations fought on the side of the Nazis and only towards the end of the Third Reich did they attempt to feign resistance.

The Second World War was no ordinary war. It was possibly the only war in history that was fought against absolute evil, a fight that united idealists defending their ideals, cynics defending their interests, and even scoundrels trying to incinerate their sins in the flames of a great struggle. Together, they were all, like all the people who fought in that war, defending their Motherland, their life and their home in the present and the future – freedom for themselves and all mankind.