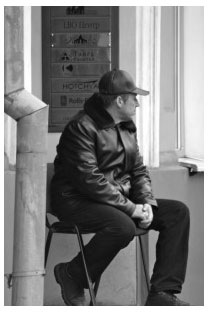 Feb. 23 was Men’s Day in Russia, so this is a great time to take a look at this dwindling Russian natural resource.

Men have an average life expectancy of 61.83 years; as opposed to Russian women, who can be expected to live on average more than twelve more years to 74.16. One doesn’t have to have a Ph.D. in Public Health to understand the factors at work: You just need a pair of eyes and a rudimentary fifth grade level lecture on prudent lifestyle choices.

Here are some of the major factors at work:
Smoking: 60 percent of Russian men smoke

They smoke really poor quality unfiltered cigarettes, and a lot of them. Why? Because they are bored. Smoking cuts up a mild-numbingly dull day into manageable pieces. It relieves the stress of navigating the Byzantine Russian bureaucracy, and it takes the edge off of the million unpleasant encounters a Russian man has every day – with the weather, with the traffic police, with his work colleagues, with his apartment’s building supervisor, with his car, with his wife…everywhere a Russian man turns, someone is looking to give him agro.

So, he smokes, and that lessens the stress, as well as the number of years he can expect to have to put up with the stress. Because smoking, as it clearly says on even Russian packets of cigarettes, kills.

Bad Diet: Russian men don’t eat well
Believe me, I know. My husband likes to fix himself a snack when there is a major sporting event on. his consists of smoked sausage, salted fish, pickles, sour cream, and barbecued potato chips, all washed down with about 13 bottles of beer. Because he is sophisticated, and frankly lazy about the shopping, he doesn’t add the National Russian Snack: salo, or pork fat. Yum Yum.

Alcohol
When Russia’s Prince Vladimir (not to be confused with Vladimir Putin), looked to upgrade his country from an economically unviable backwater to a cosmopolitan integrated European player, among the things he did to modernize Russia was to go religion shopping in 988. He sent out emissaries to the major centers of Judaism, Roman Catholicism, Islam, and Eastern Orthodoxy. Vladimir was dead impressed with the Muslims – felt that it was exactly what the doctor had ordered – and was prepared to sign on the dotted line when he got to the fine print about no alcohol. Pulling up short, Vladimir famously declared. “Drink is the great joy of the Russian people,” and called in the guys from Constantinople instead.

Road Kill
As I wrote in my monthly column driving cars in Russia is primarily a boy’s bailiwick, and in most Russian cities, driving is a major health hazard, ergo, more men die in road accidents than women.

Sedentary Existence
If Russian men are not professional athletes, like, say, a male figure skater who can’t lose gracefully, then once they are finished with their mandatory military service (18-20) they become highly sedentary: all that sitting in traffic and lounging in the sauna. Russian women, on the other hand, are always on the go: shopping, paying the utility bills at the Sberbank (which is equal to 3 Weight Watcher Activity Points), cleaning the house, running after the grandchildren, gardening at the dacha – you name it – a Russian woman is out doing it.

I will say this for the Russian government – Prime Minister Vladimir Putin and President Dmitry Medvedev are doing their best to not only talk the talk, but actually walk the walk of a healthy sober lifestyle: Putin wraps up each evening with a glass of kefir, and has a black belt in Judo, and neither of these things takes any leap of the imagination. Medvedev is rumored to start each day with an hour-long yoga practice, and I have no trouble believing that one either.

Do you have a question about Russia? Curious about day-to-day life in the world’s largest country? Leave me a comment below, or e-mail me and we’ll post an answer.